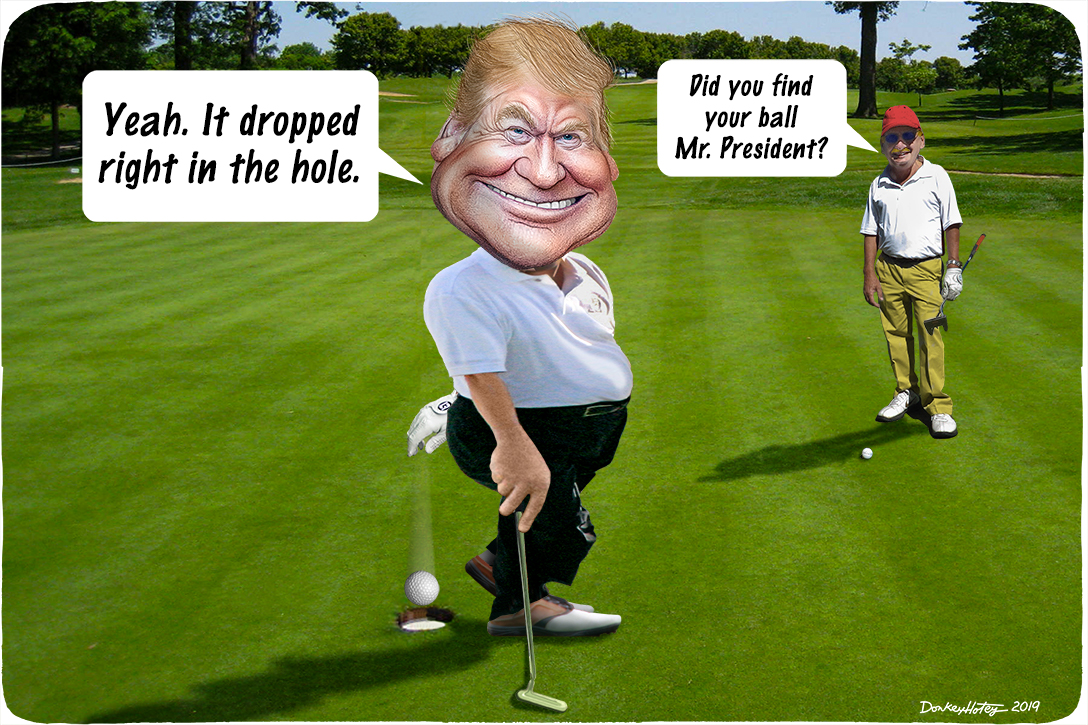 Mueller Is No Match for Trump’s Shamelessness and Indecency

When President Donald Trump made up some testimony that never happened and a letter that did not exist to attack Robert Mueller on Thursday, he could be certain of one thing: The former special counsel was not going to retaliate. And that’s part of the problem when people with even a shred of integrity have to deal with this president.

Because Trump does not care about rules. He has no honor and no shame. Facts or truth don’t matter to him and he has no discernible ideals. For people who are not like that, going up against the president is like boxing with both hands tied behind their back.

Or playing golf against somebody who picks up his own ball and moves it to a better spot, kicks yours further from the flag, and lies about how many strokes he needs for any given hole.

Coincidentally, that is exactly how Trump plays golf.

The president is also one of the rare people who can’t be shamed into good behavior. A normal person, caught lying or cheating, will stop, at least temporarily. But not the US president. He’ll double down and, with the help of Fox News, convince a big chunk of the American public that wrong is right.

Trump’s feud with Mueller is a perfect example of why all of this is problematic. We’re using the word “feud” loosely because the president is the only one fighting. He is going for low blow after low blow while Mueller was simply trying to do his job.

It’s pretty obvious that the special counsel felt that the president is guilty of obstruction of justice and that he was deeply troubled by Russia’s interference on Trump’s behalf. But he can’t say that — because he feels that he is bound by a sense of duty and the rule of law. So Mueller went as far as he believed he could.

He even took the extraordinary step of holding a press conference to note that he was not allowed to make a determination as to whether Trump committed a crime. The special counsel did state, however, that:

“If we had confidence that the president clearly did not commit a crime, we would have said so.”

Rep. Justin Amash (R-MI), the lone GOP lawmaker in Washington who is publicly backing the impeachment of Trump, was not the only one who felt that Mueller’s statement served as a call to Congress to deal with this president and his unlawful behavior in a way provided by the Founding Fathers.

The ball is in our court, Congress. https://t.co/idpQo1xItH

For somebody like Mueller, holding that press conference was like him standing outside Congress with a megaphone and shouting: “What are you waiting for??? He did it!!! Pay attention and do something!!!”

With the help of Attorney General William Barr, Trump — who is not restrained by truth, duty, or honor — twisted the special counsel’s report and Mueller’s statement into “no collusion, no obstruction” (while also claiming that the report was totally biased against him).

Because most people didn’t read the report, its conclusions are now somehow in dispute — simply because the president, a serial liar, has a much larger megaphone, thanks to Fox News, talk radio, and Twitter.

And Mueller won’t respond, sadly. He has already stated that he does not want to testify before Congress because everything that needs to be said is in the report. While House Democrats, who would hold such a hearing, would certainly ask, it is virtually certain that Mueller would not answer questions like: “Is the president correct in saying that you cleared him of collusion?” His only response would likely be “Read the report” — and Trump would claim victory.

And it’s not just the special counsel.

Heads of state are loathe to take on Trump. They may give speeches that are clearly about the US president but they rarely mention him by name. It’s not (just) that they fear potential repercussions; for many national leaders, taking on the US president would play very well in countries where he is unpopular — which is most of them. Instead, they believe that diplomacy dictates they hold their punches — and so they play by the rules while the US president ignores them.

A perfect example was German Chancellor Angela Merkel’s commencement address at Harvard last week. In her speech, the de facto leader of the free world never spoke Trump’s name while slamming his ideology. But that’s simply not enough.

This is not just a problem for individuals. The media, paralyzed by Trump’s claim that any negative coverage of him is fake news, has been pulling its punches. While journalists should strive to be impartial in most cases, the perception of fairness shouldn’t prevent them from pointing out the obvious at every opportunity: that Trump has proved himself a liar and a crook.

The president is counting on all of them to practice decorum and not expose his obvious lies and corruption. So far it is working for him.