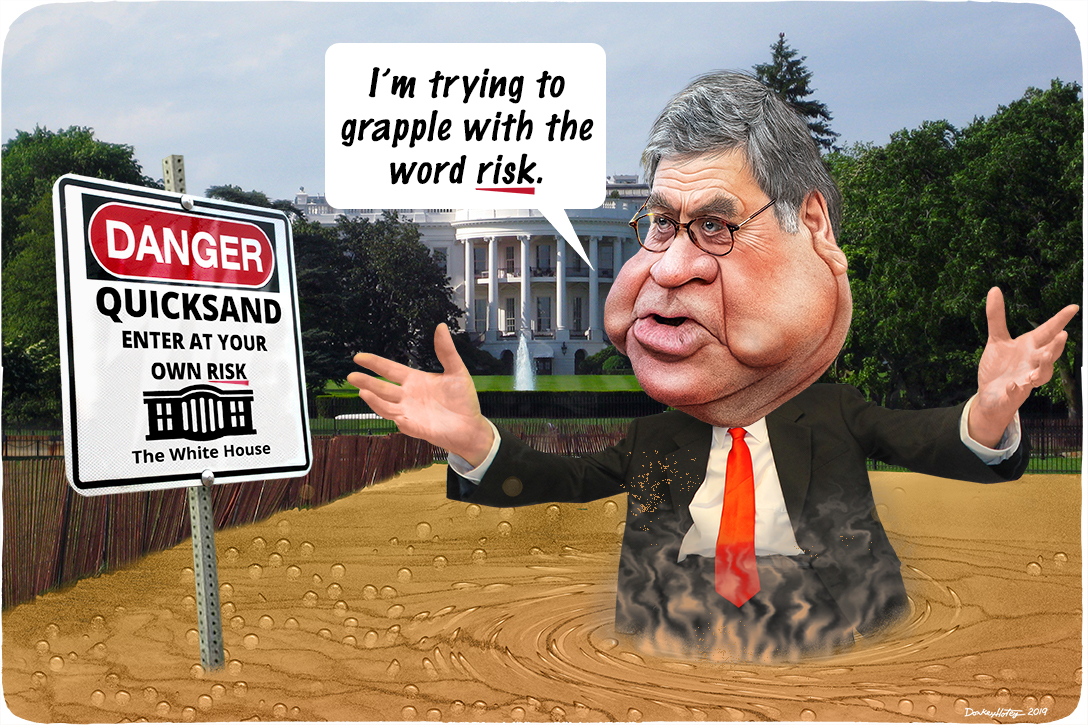 Meet William Barr, the Latest Victim of the Trump Stench

We have pointed out before that various crooks, racists, and other shady characters seem to be drawn to President Donald Trump. It makes sense that they would flock to somebody who is like them. What is more stunning, however, is how many formerly respected people allowed their (previously) good names to be ruined by their association with Trump.

Let’s set aside for a minute whether these reputations were well-deserved or not, but time and again, the odious smell of this presidency has stuck to people who used to be highly regarded in Washington and throughout the country.

Being associated with Trump is like hanging out with a skunk. Eventually, it will spray you and it won’t mind the odor but you’ll be left to deal with the stench.

Take Rudy Giuliani, who was beloved as “America’s mayor” after 9/11 before he became a joke as that guy on TV who would defend anything Trump did or said.

Or John Kelly, who was supposed to be one of the “adults in the room” to rein in Trump and, instead, followed his boss into the gutter and was exposed as a liar.

The latest in the long line of formerly respected people whose misguided allegiance to the president will ruin their reputation is Attorney General William Barr.

When facing the decision of whether he wanted to serve justice or Trump, Barr chose to shill for the president instead of following the mission statement of the Department of Justice (DOJ), which reads in part: “To enforce the law and defend the interests of the United States according to the law … to seek just punishment for those guilty of unlawful behavior; and to ensure fair and impartial administration of justice for all Americans.”

As a result, he may be held in contempt, impeached or (in our favorite but least likely scenario) Barr’s own department will be asked to open criminal proceedings against him. But even if there are no legal consequences, his name will forever be tarnished because of the events of the past month, when the formerly respected attorney and public servant essentially turned into the DC version of a mob lawyer.

It doesn’t even matter whether he lied under oath or was merely highly misleading and obfuscated the truth.

The point is that anybody who read the Mueller report could not possibly have drawn the same conclusions Barr did.

Indeed, the attorney general admitted that he did not review the evidence accompanying the report. But that raises further questions, since, in a summary of the report Barr submitted a month before its release, he concluded that Trump had not obstructed justice.

Mueller clearly wasn’t amused, because it now appears certain that he felt the president had obstructed justice on multiple occasions. While he does not explicitly state that Trump would have been charged if he were a private citizen, he often cites a DOJ opinion arguing that a sitting president cannot be indicted for a crime.

So he took the rare step of writing Barr, i.e., “creating a paper trail,” to state that the attorney general’s summary “did not fully capture the context, nature, and substance” of the full report.

Why did Barr do it? And why have scores of others blemished their good names by doing Trump’s bidding? Your guess is as good as ours.

Maybe Barr just wanted to get his son-in-law a White House job. Or maybe he is really opposed to people having health insurance. Or he wants to do his part in rolling back civil rights or separating children from their asylum-seeking parents.

Or maybe there are simply a lot more pee tapes out there than any of us can imagine.

Related front page panorama photo credit: Adapted by WhoWhatWhy from the US Senate.