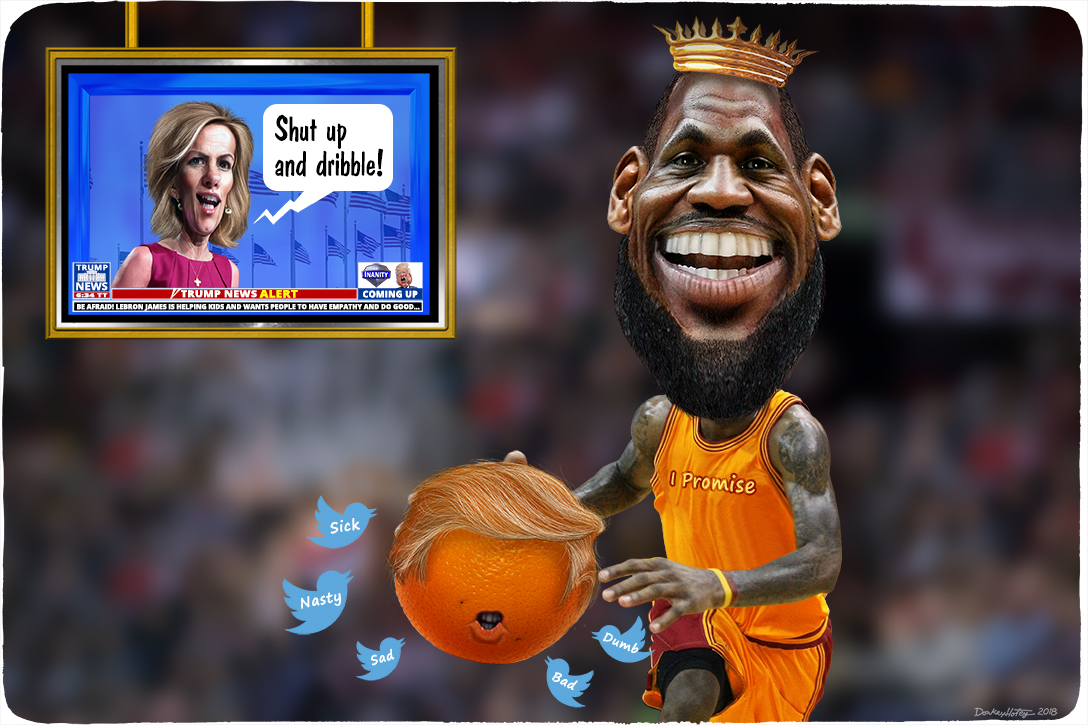 LeBron vs. Trump: A Tale of Two Schools

Fortunately for hundreds of kids in James’s hometown of Akron, OH, he did not follow her advice. Earlier this week, James opened the I Promise School, a public elementary school that he co-founded. Through his foundation, and based on his personal struggles at that age, he wanted to create a unique learning environment for kids at risk of falling behind.

“This school is so important to me because our vision is to create a place for the kids in Akron who need it most — those that could fall through the cracks if we don’t do something,” James said when he announced the project last year.

The first 240 students that began third and fourth grade this week were selected because they are at least a year behind the academic performance of their peers. To help them catch up, they will have a longer school day and school year, smaller classes as well as a massive support system.

Free meals will be provided, including food they can take home, a laptop, a bike, a trainer and intervention specialists who will help the kids stay out of trouble.

And the school will also assist the families of the students by offering parents or guardians general equivalency diploma (GED) classes and help finding jobs.

Finally, participants in James’s I Promise program will get free tuition at the University of Akron if they graduate with a GPA of 3.0 or better. All in all, this could affect 2,300 kids.

While it is unlikely that all students will graduate or achieve that GPA or choose the University of Akron, that is still a ton of money James’s family foundation has pledged to make available. The university’s president estimated in 2015 that a four-year scholarship would cost nearly $40,000, so you do the math.

Granted, not all of that money is coming out of James’s own pocket. Other people give to his foundation and the school district is putting up $8 million for the I Promise School through 2023.

It should also be noted that we hope, in addition to his charitable work, James pays his fair share of taxes (Forbes listed him as the sixth highest paid athlete this year with a total income of $85 million). It is great that some of the richest people in the US have their own foundations and give huge sums of money for good causes, but that’s no substitute for fair taxation and government regulation.

Obviously, not all uber-wealthy people — or those who claim to be rich — are as charitable. Which brings us to the subject of James’s critics and the man Ingraham so frequently defends: President Donald J. Trump.

On Friday, Trump had weighed in on James with a tweet insinuating that the athlete was dumb.

Lebron James was just interviewed by the dumbest man on television, Don Lemon. He made Lebron look smart, which isn’t easy to do. I like Mike!

So we thought it would be fun to compare the records of the basketball star, whose nickname is “King James,” and the president, especially with regard to charitable giving and their efforts in some key areas.

Academic institutions: James helped establish an elementary school for kids in need. Trump established a fake university and had to pony up $25 million so the courts wouldn’t nail him for fraud.

Covering the educational costs of kids: James will help pay the tuition of up to 2,300 students for a four-year college education through his foundation. Trump probably used his foundation to pay the $7 Boy Scout membership fee for his own son.

Signature purchase with foundation money: Crediting the importance that having a bicycle had on his own development, James will purchase a bicycle for each student of the I Promise School. Trump spent $20,000 of his foundation’s money on a portrait of himself.

While this comparison doesn’t tell the whole story, it paints a pretty clear picture and our final verdict is:

Maybe the one who really needs to shut up is Ingraham.