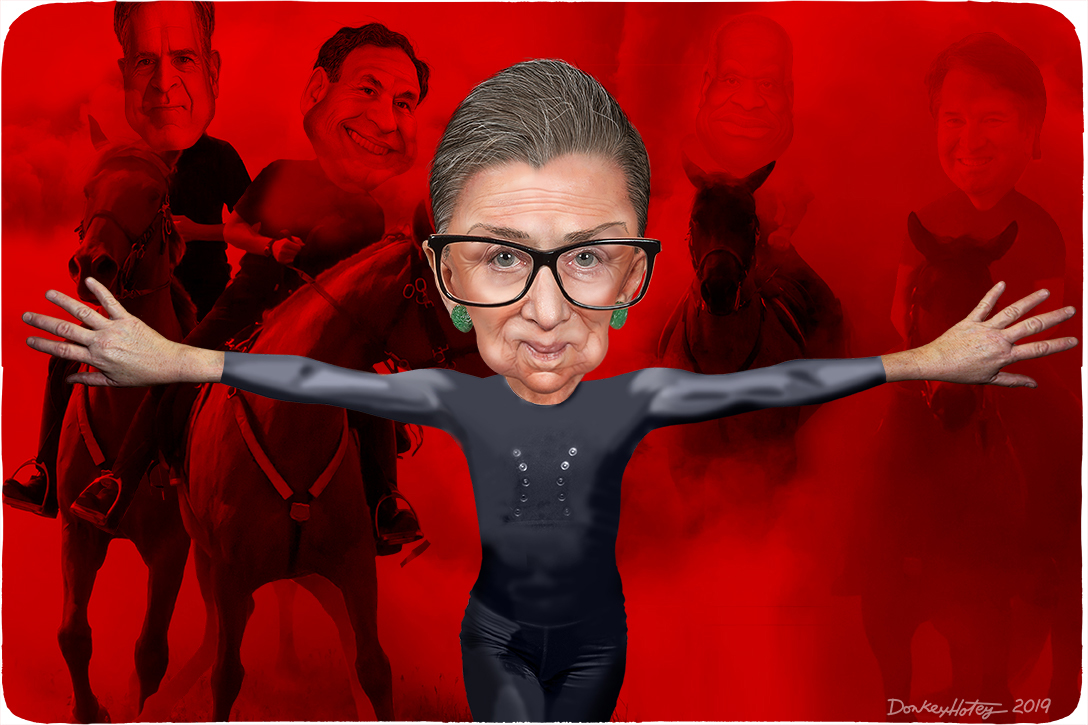 Lady Justice: Why Ruth Bader Ginsburg Has Become an Icon of the Left

If you were really quiet the Friday before last, you could hear the air being sucked in by millions of Americans who held their breaths at the same time. And the breeze you may have felt two days later was their collective sigh of relief.

What had happened? On November 22 (as though the nation would have needed another tragedy on the anniversary of JFK’s assassination), Supreme Court Justice Ruth Bader Ginsburg was admitted to a DC hospital with chills and a fever. She was released two days later.

In light of her advanced age — she is 86 — and several health scares over the past year, which included two recurrences of cancer, it is understandable that people are worried about her wellbeing. Of course, the real reason her allies care is that, in many ways, she is the most important woman on the planet.

Sure, Angela Merkel may be the leader of the free world after President Donald Trump abdicated that role, but the German chancellor is a lame duck in her own country and her focus is on Europe.

And House Speaker Nancy Pelosi (D-CA) may be third in line to the presidency, but her power is restrained by Senate Majority Leader “Moscow Mitch” McConnell (R-KY), who cares much more about stacking the courts than making the US a better place for all.

It’s precisely those courts that are a major part of the reason why Ginsburg is so important.

Three years into the Trump presidency, the courts have, to a large degree, worked as intended: as a safeguard against authoritarianism as well as to counter policies that directly contradict the principles the country was founded on. That bulwark, however, is slowly being eroded by McConnell’s Senate, which is rubber-stamping the lifetime appointments of even the least-qualified candidates as long as they are just right-wing enough.

But while there is now a conservative majority on the Supreme Court, it has not been as ironclad as Trump supporters had hoped. To really get a stranglehold on the court, and to be on the safe side in case there is an opening when a Democrat is president, they need one more seat while they still control the Senate and the White House. Ideally, they would like to see it filled by a young ideologue who will move the high court sharply to the right for years — and possibly decades — to come.

Because, as the attitudes of Americans are changing on a range of cultural and economic issues, a solid Supreme Court majority is the only way for conservatives to preserve the society they want: where abortion is a crime, only the “right” people get to vote, unrestrained capitalism continues to rule, and to hell with minorities and the environment.

They need that seat — and Ginsburg is denying it to them.

That is why she is much more than a justice who reliably supports women’s rights, minority rights, voting rights, and pro-environmental policies, and favors people over corporations. Ginsburg symbolizes that bulwark. For as long as she is womanning her post, she is giving hope to those who believe in all of the above.

More than anything, Ginsburg is revered because she epitomizes the anti-Trump movement. Through her mere existence, she is resisting. Each day she refuses to resign, and, to put it bluntly, each day she refuses to die in spite of extremely serious health issues, is a small victory over those who would like her to leave the Supreme Court — either voluntarily or feet first.

That’s why little girls dress up as Ginsburg on Halloween and little boys don’t dress up as, for example, Chief Justice John Roberts or Brett Kavanaugh.

And, in the era of the “grab them by the pussy” president, of two men on the Supreme Court having been credibly accused of sexual misconduct, and of a Republican Party that seems hellbent on controlling every aspect of the female body, it is truly poetic justice that a woman is symbolizing the resistance by standing up to them — and doing so on her terms.