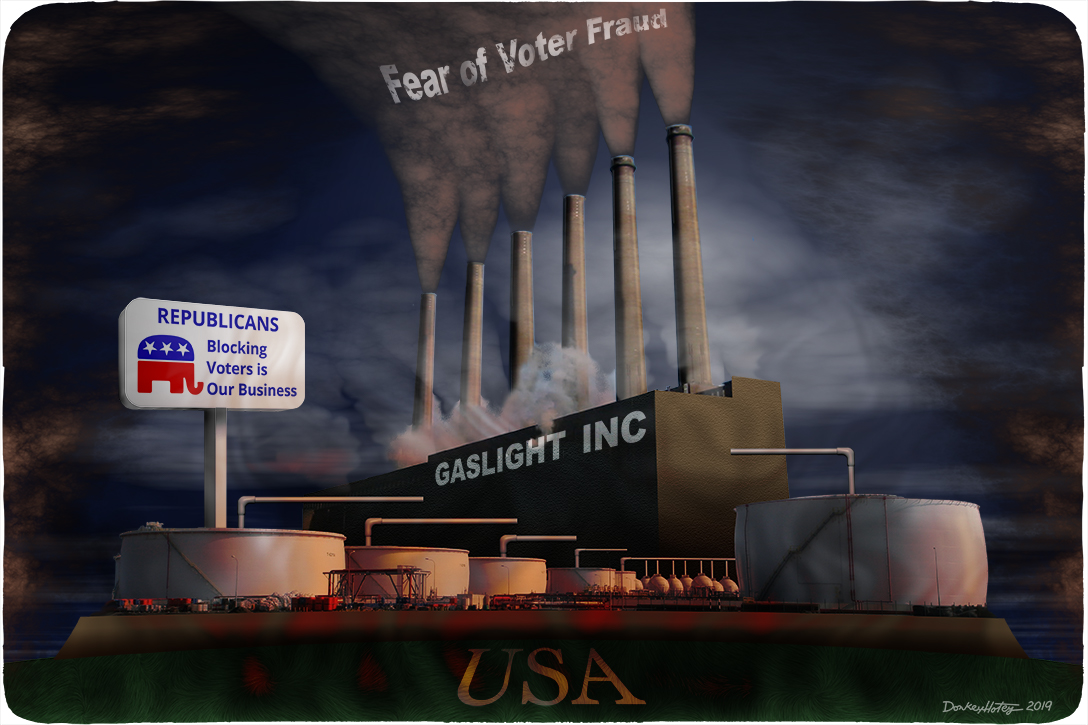 Is the GOP Trying to Gaslight Americans on Voter Fraud?

Being afraid of huge numbers of noncitizens voting in US elections is a bit like worrying about a zombie invasion. It sounds like a major problem in theory but it’s not something to be overly concerned about in real life.

We know this. The data is very clear on the occurrence of in-person voter fraud. It is a crime that is extraordinarily rare. We have explained why: The risk is enormous and the reward is negligible. There is also no anecdotal evidence, i.e. successful prosecutions of Americans who voted illegally.

The notion that noncitizens, a group of people intent on flying below the radar, are registering and voting in huge numbers is equally ridiculous.

That doesn’t mean that there aren’t a few people who try to cast fraudulent votes or that noncitizens, either intentionally or through ignorance, don’t occasionally register to vote. But there is simply no evidence that suggests this is happening on a large scale. We’re talking about a handful of people among millions.

Yet, somehow, Republican officials in Texas came up with a list of nearly 100,000 names of registered voters whom they suspected of not being citizens. Furthermore, these officials claimed that 58,000 cast a ballot at least once between 1996 and 2018.

While that would constitute a very low percentage of Texas voters within that 22-year span — and far below the millions of noncitizens President Donald Trump believes to have voted in 2016 — it would still be a massive problem.

Not surprisingly, however, the numbers didn’t hold up, and any assertions of tens of thousands of noncitizens having voted in the Lone Star State unraveled almost immediately (but not quickly enough to prevent Trump from tweeting about it).

Since the list was released, tens of thousands of names have already been cleared. In one county, for example, all 366 of the names that had been flagged have been determined to be citizens.

That begs the question why high-ranking Texas officials would roll out this sham of a list with great fanfare only to open themselves up to ridicule and lawsuits.

There are a couple of reasons: For one, actions like this intimidate new voters — in this case people who became naturalized citizens but are worried that maybe they are not eligible at all and don’t want to take the risk of running afoul of the law.

Perhaps more importantly, by sowing distrust in elections, Republican officials from Trump on down are laying the groundwork for writing new election laws that disenfranchise eligible voters.

That is certainly consistent with something we have tried to alert the public to in the past. Instead of trying to adjust their politics to an increasingly diverse country, the GOP has been on a crusade to tailor the electorate (and congressional districts) to people who support their old ideology.

But the more young people and minorities vote, the more difficult that task gets and the more extreme the disenfranchisement of these voters has to be.

That is one explanation for why Trump has been trying to gaslight America on this issue since shortly after he was elected.

But don’t expect those to get addressed in Texas, a state whose election laws seem to be designed to send as many Republicans as possible to Washington and not to ensure that eligible voters get to participate in elections.

As Democrats in Congress and in state governments across the country are trying to fix the broken election system, and as activists seek to get democracy-restoring measures onto state ballots in 2020, expect Republicans to do what they do best: obfuscate the issue, disregard science, and invent non-existent dangers in an effort to cling to power.

The cartoon above was created by DonkeyHotey for WhoWhatWhy from these images: Factory (Andreas Praefcke / Wikimedia – CC BY 3.0) and tanks (Ryan Lackey / Flickr – CC BY 2.0).