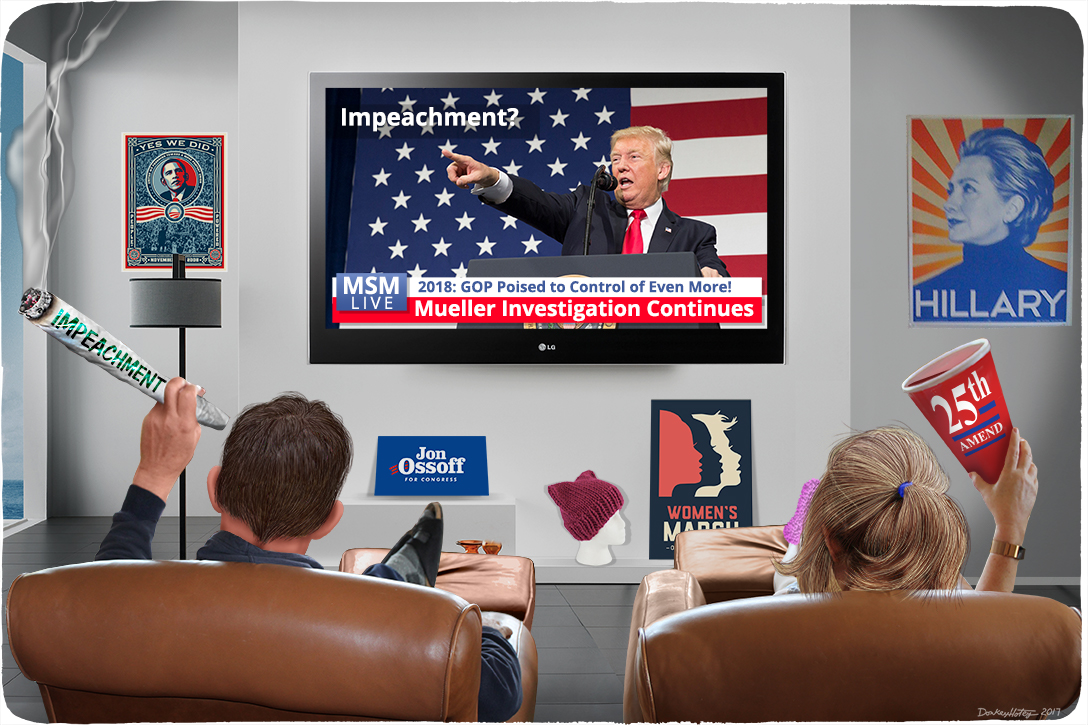 Impeachment Is Fool’s Gold for Democrats

Seeking a cheap high, a large group of Americans is at risk of destroying its dreams and aspirations. No, we’re not talking about the millions of people addicted to opioids but rather about Democrats who are on track to blow their chance to beat a historically unpopular president.

And if they can’t manage to defeat Donald Trump — whose approval rating sits at 35% even though the economy is humming — then Democrats simply don’t deserve to win.

While Trump’s dismal numbers should be good news for his opponents, it appears that the sizeable margin is keeping the Democrats from doing what is needed to win back the House of Representatives next fall. The president is so unpopular that many of them seem to think all they have to do is oppose him.

And they seem to be intoxicated by the thought of finding some way to get rid of Trump before his term is up.

Last week, a group of Democratic lawmakers vowed to introduce articles of impeachment later this month — again. Their thinking might be that they can eventually force a vote and get Republicans to stand behind Trump. But what’s that going to accomplish? Incompetence is neither a high crime nor a misdemeanor and these stunts are just going to consolidate the president’s base.

News flash: There won’t be an impeachment, and the provision in the 25th Amendment under which Trump could be deemed unfit for office will not be triggered. And even if these things were to happen because some smoking gun evidence is uncovered — then Vice President Mike Pence will step up, and there will still be a GOP-controlled Congress. Only the tweeting will have stopped.

There is also nothing the Democrats can do to influence the Mueller investigation. That’s going to run its course one way or another.

So instead of clinging to an impeachment fantasy, Democrats should focus their efforts on finding good candidates, raising money, getting their own house in order (which is a very high priority as the events of this week have shown) and, most importantly, coming up with a message that resonates with American voters.

All of that will be difficult enough without being distracted by the daily Trump circus.

Republican-controlled state legislatures continue to stack the deck in favor of the GOP through voter suppression efforts, gerrymandered redistricting, etc. To succeed, Democrats have to fight these tactics in the courts as well as by educating potential voters and getting them registered in time so they don’t get tripped up by new rules designed to keep them from the polls.

In addition, voter files across the country have to be updated. That takes time and money that the national party has to invest right now if they want to win again.

And while the Republicans are split between the followers of Trump and those who believe he will ultimately doom the party, the Democrats are in disarray as well. There is still a deep rift between the progressive and the establishment wings of the party. That has to be mended quickly or the Democrats are going to suffer yet another painful defeat in 2018.

With all of this hard work ahead, there is simply no time to waste on an impeachment high.