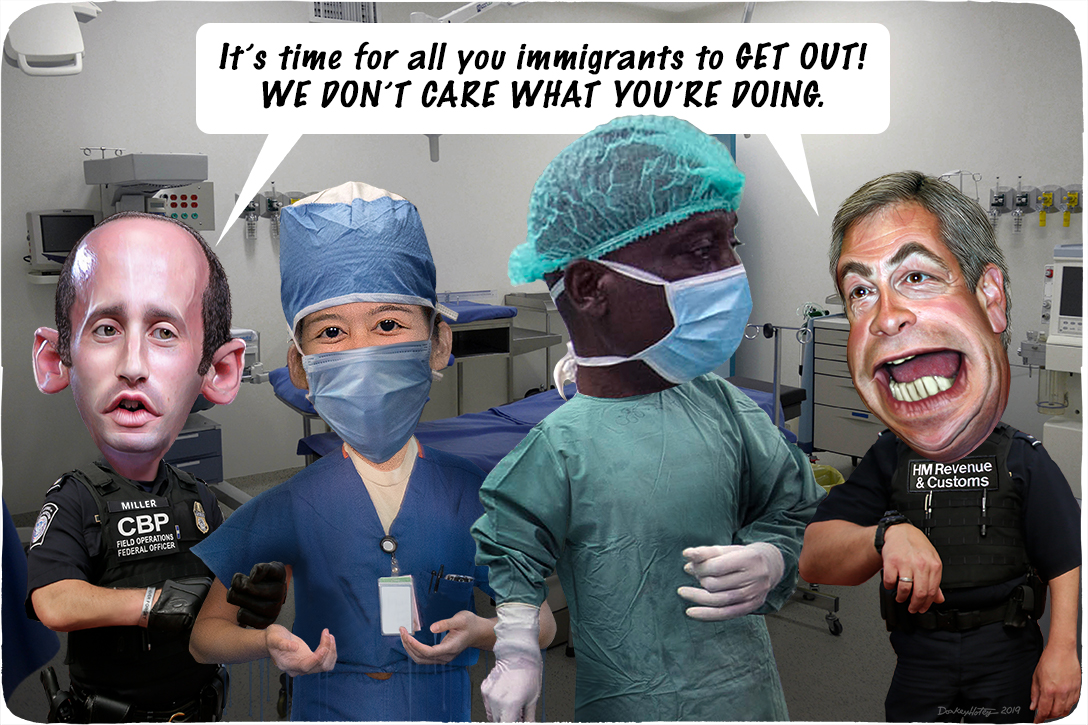 Immigrants in Healthcare: Essential but Exploited by Populists

I covered healthcare in Washington, DC, for a few years at the start of my journalism career. Back then, it was all about abstract policy for me, because, fortunately, I had not had any real experiences with the US healthcare system.

More recently — earlier this year to be precise — I got a much more intimate look at healthcare in action. Following open heart surgery and various complications, I was forced to spend nearly two months in a hospital — a large portion of that in the ICU.

When you are hooked to half a dozen cables, breathing through an oxygen mask, surrounded by beeping machines 24/7, and forced to lay on your back for weeks on end, the nights get pretty long and some very dark thoughts creep into your mind. So it shouldn’t surprise readers that there were lots of times when I didn’t think I would make it out alive.

But here is something I never worried about: Not once was I concerned whether my massive hospital bills would leave me bankrupt. The reason is that my surgery was in Germany — and my expenses were capped at €10/day ($11/day) for no more than 28 days.

That means my copay for two major heart surgeries, three minor procedures, hundreds of pills and injections, three weeks in the ICU, and seven weeks in the hospital (plus three weeks of rehab) overall was €280 ($310). That’s about the cost of one night’s lodging in a nice hotel.

It’s something Americans should think about when they head to the polls next year. Healthcare for all is not some sort of pipe dream. It is a reality in many countries.

But this editorial is not about the terrible US healthcare system, it’s about immigration. How are those two related, you ask?

Well, throughout the world, it’s often immigrants who make sure that quality healthcare is accessible and affordable. In my case, the head of the cardiology department who performed the surgery was Iranian, many of my doctors were Turkish, and my nurses came from all over the world — Serbia, Greece, Ukraine, Cuba, and Poland.

To some people, that seems to be unacceptable. Such people, if they found themselves in my position, would prefer to be cared for only by German doctors and nurses. Demanding that the people keeping one alive all have a certain passport makes no sense, of course. It’s bafflingly shortsighted. But xenophobia is not based on logic.

Some healthcare workers have to deal with racism and xenophobia on a personal level.

Obviously that’s unpleasant for them but it is a symptom of a larger problem. We know that many people stick to their own race when they interact socially, and, just this week, a poll found that many Americans, especially white Republicans, are bothered by people speaking anything but English.

In a healthcare setting in the US, however, where 16 percent of registered nurses and almost one-third of physicians are immigrants, xenophobic patients won’t be able to avoid people from another race or those who speak another language.

For some, that could turn out to be an epiphany when they realize that these “others” are doing their best to make sure that all patients get better.

But many others won’t have an open mind, and will feel threatened that not all healthcare workers are lily-white. They will think that immigrants are taking jobs from people who are like them — even though aging populations across the world are resulting in a shortage of healthcare workers.

Populists in the US and in Europe are exploiting this xenophobia and these unfounded fears.

When an attendee at a Trump rally suggested shooting immigrants, the president made a joke about it. It’s against this background that a Trump confidant like Stephen Miller can come up with one devious immigration policy after another and retain the ear of the president. Meanwhile, children are separated from their parents and locked up at the border, parents of American citizens are deported, ICE raids become more common, and a wall has become the symbol of the Trump presidency.

In the UK, where 12.7 percent of National Health Service (NHS) staff are foreigners, Nigel Farage and others of his ilk tapped into the Kingdom’s xenophobia to push through Brexit. It is very likely that the NHS will suffer as a result; indeed, the British government is already trying to take steps to prevent some of the worst consequences.

In the end, both countries will be hurt because of these policies. I know this from a policy perspective, yet this truth was driven home to me when I relied on both immigrants and Germans to keep me alive.