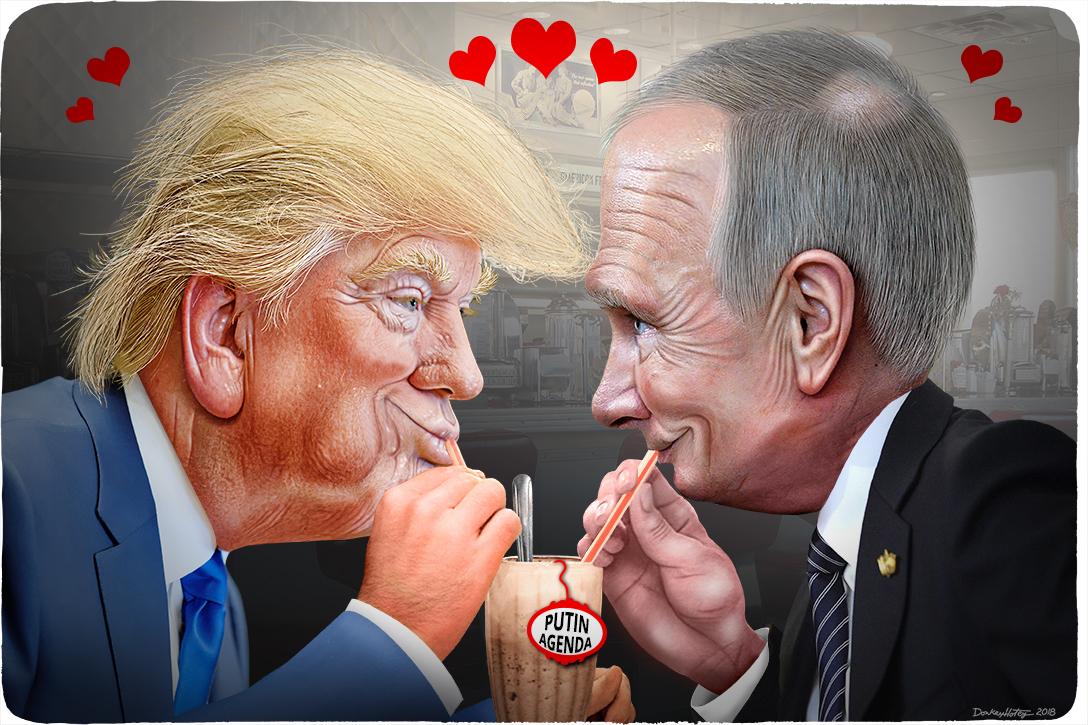 Imagining Trump and Putin in Private

The fact that President Donald Trump insisted on meeting one-on-one with his Russian counterpart Vladimir Putin raised a lot of eyebrows. It’s easy to see why. First and foremost, there is Russia’s role in getting Trump elected in the first place. But that’s hardly where it stops. There are also nebulous financial ties to Russian oligarchs, Trump’s admiration of Putin, and the many actions he has taken that seem to be playing right into Russia’s hands.

Since we won’t know what will go on behind closed doors — and because we obviously will not be able to believe any account offered by the truth-averse Trump and the former spymaster Putin — it is left to our imagination how the conversation will go.

Here is what may transpire:

Trump: “Let me first address the elephant in the room. The American people expect me to tell you in the strongest possible terms not to meddle in the midterm elections.”

After a moment of silence, both men start laughing hysterically.

Trump: “Seriously, how is the meddling going?”

Putin: “Rest assured that we are well on track to doing our part once again. If your party loses, it won’t be our fault. Please thank the Republicans in Congress for not passing any meaningful legislation that would have made it more difficult for us to be involved. We are thinking about awarding the Order ‘For Merit to the Fatherland’ 2nd Class to Paul Ryan for all he has done and the Order ‘For Merit to the Fatherland’ 1st Class to Mitch McConnell for standing in the way of a bipartisan condemnation of our activities in 2016. Their service to Russia is much appreciated.”

Trump: “But I will still get the biggest medal?”

Putin: “Yes, as I have explained to you many times, you will receive the grandest medal in this history of our country. Russia loves you and your approval ratings are through the roof.”

Trump: “Will it also be the shiniest?”

Putin (exasperated): “Yes, it will be the shiniest medal. But let’s get to business. There is much to discuss.”

Putin: “Consider this your 18-month performance review. Usually we would have liked to do this after your first year but it is obviously difficult to meet. Overall, I am pleased with your performance.”

The Russian president looks at a section that says ISOLATING THE UNITED STATES in Russian: “You have done a brilliant job of putting America first and should continue your trade policies. Remember that China and the EU are trying to take advantage of you. You have to be tough on them.”

Trump: “And also Mexico and Canada.”

Putin mumbles in Russian: “We don’t give a damn about Canada and Mexico. They are no problem for us, you fool.”

Putin: “I said: ‘Of course also Canada and Mexico.’ How could I forget them?”

The Russian president goes down the list of items in his folder. The next one says UNDERMINING ALLIANCES.

Putin: “I am also pleased with your performance at the NATO meeting. Keep in mind that they, and the EU, are just trying to take advantage of you. I suggest that you start withdrawing American troops from Europe. Imagine how much money this would save and it would obviously put America first. In addition, you should stop assisting the Baltic countries and selling weapons to Ukraine. They are very ungrateful and I heard that your poll numbers are very low there. They don’t like you.”

Trump: “What do you mean by the Baltic countries? Like Serbia and Croatia?”

Putin: “What? No, that’s the Balkan. I mean Latvia, Lithuania and Estonia. You know, they were part of my country once…”

Putin (continues in Russian): “… and they will be once again when you destroy NATO.”

Trump: “Yes, it’s like that one hotel with my name on it in Panama and they just took it off. It’s so unfair. A total witch hunt. Do you think there is anything you can do about this?”

Putin: “I will look into it. But you have to keep pressure on NATO and stop assisting any country that was once part of the Soviet Union.”

Putin: “When you met with my foreign minister in the Oval Office, you passed along some very interesting information. We were very impressed because the media had said you pay no attention during classified briefings and are not in charge of US secrets.”

The next part of the meeting is redacted as Trump spills the beans on US sources and methods across the world in an effort to impress Putin with how much he knows.

Putin (furiously taking notes): “Impressive. Clearly, the media was wrong about you.”

The Russian president consults his list again and shifts to DESTROYING CONFIDENCE IN AMERICAN INSTITUTIONS.

Putin: “That brings us to the next point. You have been masterful in pointing out that all US media is fake news and that your own Justice Department is out to get you. This might be the area in which your performance has been strongest. Your supporters have to understand that they cannot trust the media.”

Trump: “Well, in Russia you have other ways of dealing with journalists. Maybe you could arrange it so that some American reporters mysteriously fall down elevator shafts. I could give you a list…”

Putin: “Maybe we could work something out if you had better control of your Justice Department. But as the indictments from Friday show, they are working against us. And this brings us to the areas in which you have performed below expectations. You need to get DOJ under control before this gets out of hand.”

Putin: “Save it for Twitter. You need to start firing some people and get more reliable persons in office or this is not going to end well for you. I expect Sessions and/or Rosenstein to be fired this month. When you do that, more of my friends will buy some of your condos. And I don’t need to remind you that I have some information that you don’t want the public to see.”

Putin: “Just so we are clear. But for now, you have done a good job and we’ll keep the money flowing. But you also have to do something about these sanctions against my friends. If they have no money, they can’t funnel it to you.”

Putin (in Russian): “If you could understand, we wouldn’t be having this conversation.”