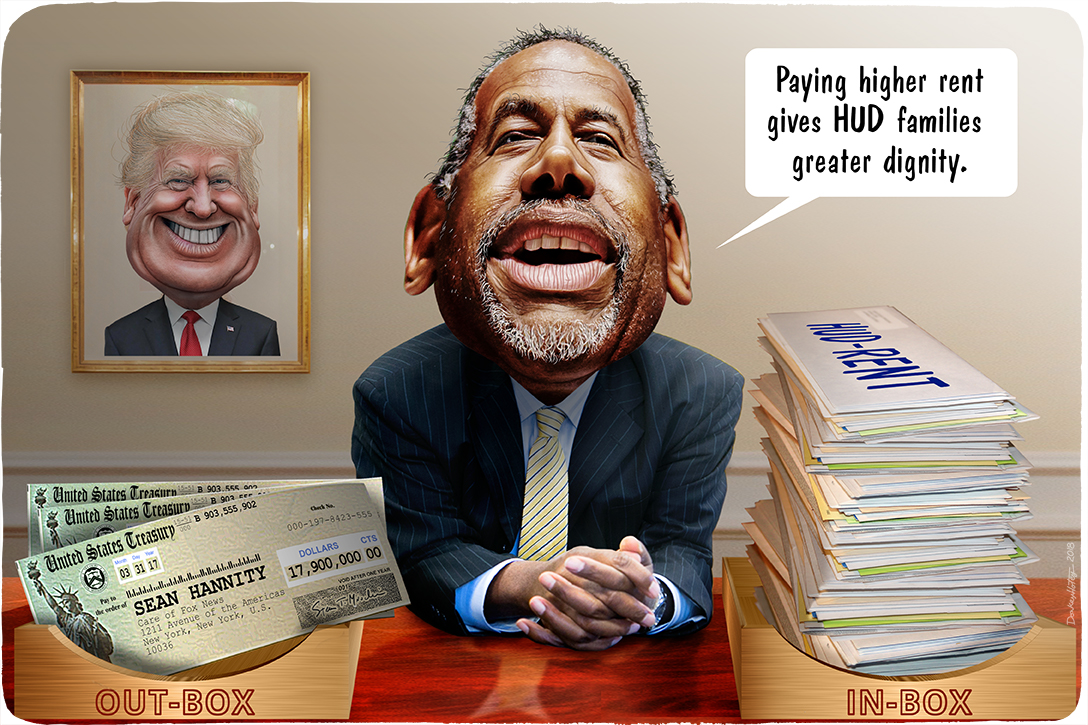 How HUD Screws the Poor and Helps Hannity

When the Senate considered the nomination of Ben Carson as secretary of Housing and Urban Development (HUD), Sen. Marco Rubio (R-FL) delivered a passionate statement in favor of letting somebody with zero relevant experience serve in President Donald Trump’s cabinet.

“HUD is not just about providing people with a place to live. HUD is about the American dream,” Rubio said. “Dr. Carson believes this not because he read about it in a book or in a magazine or because he watched some documentary on PBS. He believes it because he has lived it, and that cannot be easily replicated.”

It’s true that Carson has come a long way. As a kid, when his family was living on food stamps, he probably didn’t envision that one day he’d be eating from a $31,000 dining room set that he wanted taxpayers to foot the bill for. To be fair, he’s not doing that anymore because he got caught and the order was canceled.

It’s hard to square the dining room set debacle with Rubio’s praise of the “values” and “character” that Carson was supposed to bring to HUD.

It’s even harder to recognize the former surgeon’s alleged “compassion” in his new plan to triple the rent of hundreds of thousands of the poorest households.

But not to worry, there are still Americans HUD is helping. For example, Sean Hannity. The Guardian reported earlier this week that the Fox News host is linked to the purchase of nearly a thousand homes through shell companies. Some of them, according to the paper, were purchased with support from HUD. This isn’t illegal but the optics aren’t exactly great for Carson and the Trump administration.

So much for hiring the best people and draining the swamp.

However, the news that HUD wants poor families to pay more in rent — while simultaneously helping a conservative multi-millionaire who is a friend of Trump — is consistent with the GOP’s attempt to turn every negative stereotype associated with Republicans into reality.

There is so much of it happening that it’s difficult to keep up.

Another example is that of House Speaker Paul Ryan (R-WI), who forced House Chaplain Rev. Patrick Conroy to resign from the post. Father Conroy told the New York Times that he believes the decision was related to a prayer he gave prior to the passage of the Republican tax reform legislation.

At the time, he said there should be no “winners and losers under new tax laws, but benefits balanced and shared by all Americans.” A week later, according to Conroy, he heard from the Speaker’s office that people were “upset with this prayer.” That certainly makes sense, because the final bill did none of the things Conroy prayed for.

On Friday, Ryan offered some other reasons, but even Republicans weren’t buying it.

In a week in which Environmental Protection Agency Administrator Scott Pruitt also had to testify before Congress about his various scandals, the takeaway seems clear: Screwing over the American people won’t cost you a job in this government — but praying for fairness will.