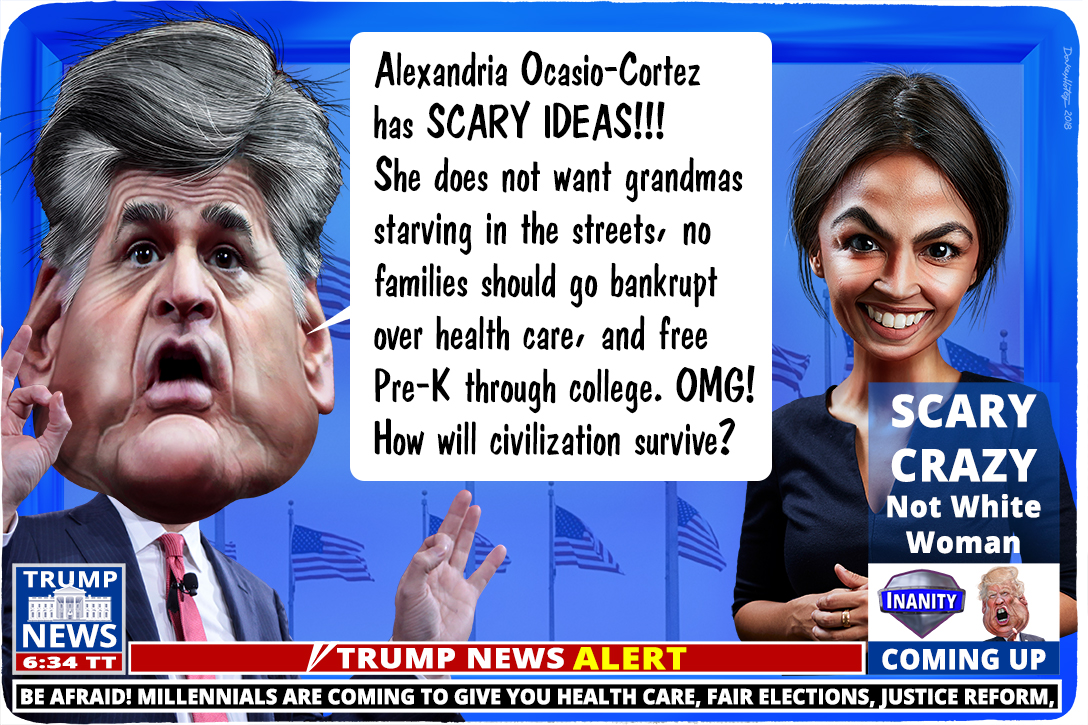 Has the Right-Wing Spin Machine Met Its Match?

Alexandria Ocasio-Cortez is the perfect figurehead for the progressive movement in the US. At 28, she represents a new generation of Americans. As a Hispanic woman, she represents minorities. As a Democratic Socialist, she represents different solutions to the growing inequality in the US.

But don’t be surprised if conservatives, who will attack her for precisely the reasons listed above, will be the ones to talk about Ocasio-Cortez the most. To them, the Democratic Socialist who shocked the political world by beating Democratic incumbent Joseph Crowley in the primary for New York’s 14th Congressional District, is the ideal person to scare their base into action.

Because the conservative outrage/fear machine needs fuel to keep running at peak capacity. Here is how it works: Lots of research has shown that fear makes people more conservative. If you view the world as a scary place — one in which various brown people like MS-13 (the villains du jour), terrorists, Muslims, immigrants, thugs, etc. are trying to take things from you — then you are more likely to back the guys who promise security, walls, more prisons, huge defense budgets, and a return to the good old days. Especially if the same guys also say that they will fight the war on terror/drugs/crime/Christmas on your behalf.

So all you had to do is to convince people that the US is such a frightening place and you had yourself a winning formula — until now. President Donald Trump excels at this but even he can’t do this alone. Enter the aforementioned outrage machine, aka Fox News and the conservative media. They will not only amplify Trump’s message but also bombard you with tales of how danger lurks around every corner, courtesy of the “others.” As a bonus, they will make you believe that there is no such thing as progress and that life in the US is a zero-sum game, i.e., for anything good that happens to another group of people, something will be taken from you.

That’s why, at first glance, Ocasio-Cortez seems like such a great target for Fox News and the like. Who better to get the Trump base’s blood boiling than an “other,” a woman, a millennial, a socialist, and an East Coast elitist?

But the first broadside from the network’s flagship blowhard only invited ridicule. When Sean Hannity wanted to show his viewers just how radical Ocasio-Cortez’s platform was, his list of her “crazy” ideas included her support for women’s rights, seniors, Medicare for all Americans, cleaning up campaign finance laws, criminal justice reform, and curbing Wall Street gambling on the economy.

That might sound frightening to a multi-millionaire like Hannity, who would probably be asked to pay higher taxes, but, to young people, Ocasio-Cortez’s vision of a better America isn’t scary at all — it is in line with their views on fairness and equality.

In addition, Ocasio-Cortez is not at all apologetic about her platform or who she is. That is in sharp contrast to many Democrats who do not embrace progressive ideas because they are worried that doing so will hurt them with voters in the political center. As a result, they run on a platform that excites nobody.

This is one of the things that doomed Hillary Clinton, who ran a campaign trying to appease everybody and offend nobody. That’s not a recipe for building excitement.

On the other hand, there is no confusion about what or whom Ocasio-Cortez is for. She is an unabashed progressive and embraces her platform, which is why the conservative outrage and fear machine may prove to be much less effective against her.

Because an attack of “She wants Medicare for all” doesn’t really work on somebody who doesn’t apologize for that position and instead says, “Of course I want good healthcare for everybody. Let’s talk about why you don’t!”

In addition, demographics are on her side. In 2016, young people (Gen X and Millennials), who tend to be more progressive, for the first time voted in greater numbers than old people (Baby Boomers and older), who tend to be more conservative. What was a small gap two years ago will be bigger in November and keep increasing as older Americans die and young ones become eligible to vote.

So when Ocasio-Cortez is attacked for voicing the ideas young people believe in, they take it as an attack on one of their own. That is very different from an attack on somebody like Clinton, Chuck Schumer, or Nancy Pelosi — old career politicians with whom young people have no connection.

Obviously it is too early to tell, but Ocasio-Cortez may have rocked the political world in two ways. Her victory undeniably provided young progressives with a blueprint for getting into Congress, i.e., by embracing a bold agenda and taking out incumbents (which is why establishment Democrats don’t really like to talk about her at all.) And her passion, appeal to young people, and embrace of a truly progressive platform, may cause any attacks on her to backfire: they only will rile up a new generation of voters looking to make their voices heard at the ballot box.