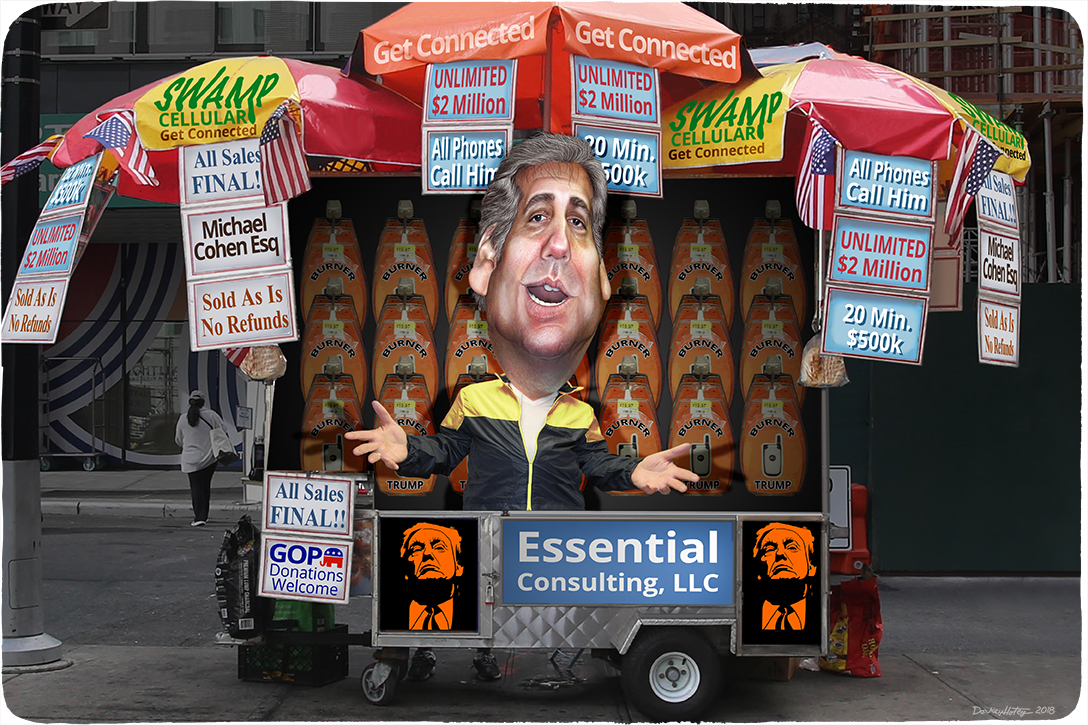 To anyone even vaguely familiar with Donald Trump, the notion that he and his gang of grifters would drain the swamp instead of wallowing in it always seemed ridiculous.

So it came as no surprise that several major corporations shelled out hundreds of thousands of dollars to Michael Cohen in the hope that Trump’s fixer could grease the wheels a bit as they were trying to curry favor with his boss.

The only truly shocking thing would be if the president didn’t somehow receive a kickback from this money. Maybe we’ll find out through Special Counsel Robert Mueller, who has interviewed all the major players in this saga — apart from the president.

If Cohen, and anybody else involved in this apparent pay-to-play scheme, doesn’t get into legal trouble over this, then it’s just further evidence that the US currently allows corruption and bribery at the highest levels of government.

Ostensibly, companies like AT&T paid Cohen’s “Essential Consultants” for insights into how the Trump administration operates. But let’s not kid ourselves. Cohen probably understands as much about “legal consulting concerning standards on production costs,” for which he pocketed $150,000 from Korea Aerospace Industries, as a reasonably intelligent grade schooler does — or a smart tree.

And he likely knows nothing about healthcare policy but still managed to get paid $1.2 million by pharmaceutical manufacturer Novartis for information on what Trump may do on “certain US healthcare policy matters.” This week the company said its executives quickly “determined that Michael Cohen and Essentials Consultants would be unable to provide the services that Novartis had anticipated.” While the company admitted it made a mistake, it didn’t specify what it expected to get in return for its money when it hired a lawyer whose primary skill seems to be arranging payments to Trump’s alleged mistresses — and he even sucks at that.

But it’s not difficult to figure out: they wanted Trump’s ear and everybody knows that the way to that orifice would have to be lined with favors and flattery. Just because they might have gotten conned by Cohen’s overpromises, which is the best-case scenario for the companies involved, doesn’t make them look any better.

By the way, there is no evidence that Cohen or Essential Consultants are registered lobbyists, which makes the entire thing even shadier. And, of course, a Russian oligarch may also be involved. It seems nothing is going on in Trumpworld without a rich Putin crony in the mix.

AT&T, which paid Cohen $600,000, also said it made a mistake and Bob Quinn, the company’s senior executive vice president for external and legislative affairs, i.e., its top in-house lobbyist, is being forced out.

Seeing how these companies have not stepped forward on their own, it appears as though the “mistake” they are alluding to is not that they tried to buy influence with Trump but rather that they tried to do it through somebody who was dumb enough to get caught. After all, AT&T hired Cohen more than a year ago, the contract ended in January, and it’s only now that Quinn is asked to retire.

It also raises the question of how many other companies — or governments — found smarter ways to funnel money to Trump and his inner circle, e.g., through real estate deals or through people who aren’t caught up (yet) in Mueller’s web.

For all that talk from conservatives that the “deep state” is trying to take down Trump, what’s really surprising is that there hasn’t been a single IRS employee with access to the president’s tax returns who decided to take one for the team. The maximum sentence they’d get is five years and, let’s face it, anybody who releases Trump’s tax returns could probably raise a billion bucks through a crowdfunding campaign for their legal defense fund. That way they could get a much better lawyer than Cohen — although it’s becoming increasingly obvious that’s not saying a lot.