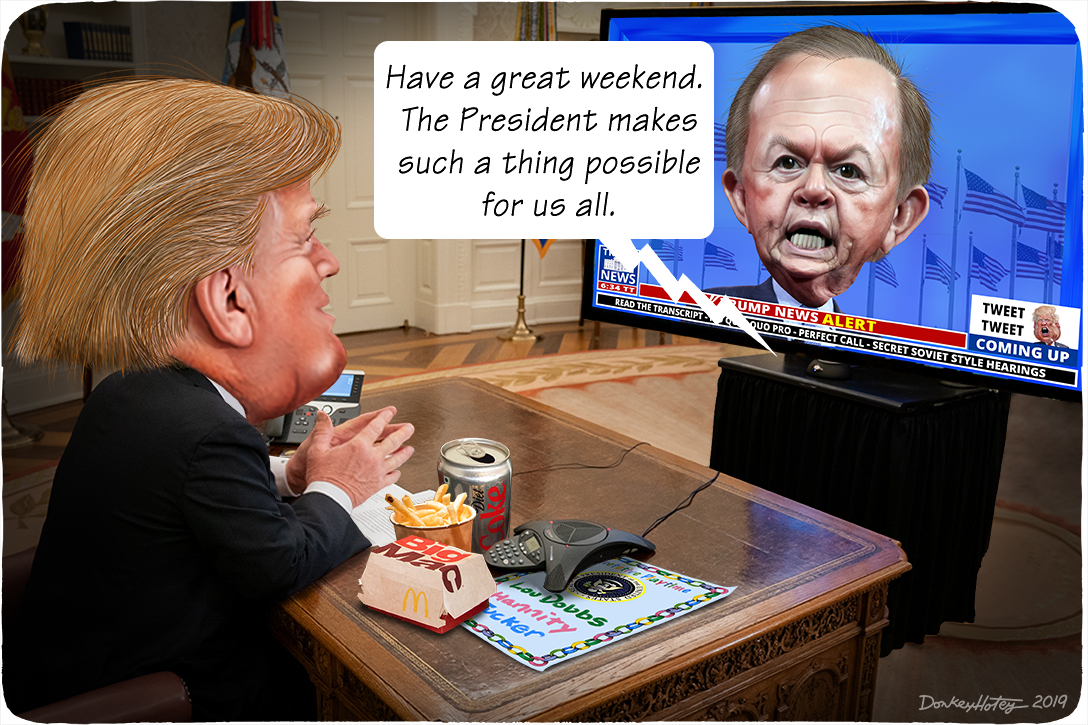 When reality meets the right-wing fantasy wonderland created by Fox “News,” it’s usually not a good look for the network that, as we’ve pointed out, was created to monetize the fears and insecurities of white conservatives.

The impeachment hearings are a perfect example: Anybody watching the real thing is witnessing an evolving, damning case for impeachment that is supported, in part, by President Donald Trump’s own words, statements made by various people in his inner circle, a partial transcript released by the White House, and numerous government employees with distinguished records and great reputations. All of them are saying the same thing, and what Trump did is entirely consistent with who he is as a person.

Anybody following along exclusively through the lens of shows like Fox & Friends, Hannity, or The Ingraham Angle, however, is convinced he or she is witnessing a coup unfold.

It should be noted that, in order to succeed, this “coup” would have to rely on the cooperation of more than one-third of Senate Republicans, and its ultimate outcome would be the ascent of ultraconservative Mike Pence to the presidency. Some coup that would be.

And that’s only where the insanity of the narrative pushed by Fox News begins.

A perfect example came during Friday’s testimony, when Trump tweeted about the day’s witness, former US ambassador to Ukraine Marie Yovanovitch.

Everywhere Marie Yovanovitch went turned bad. She started off in Somalia, how did that go? Then fast forward to Ukraine, where the new Ukrainian President spoke unfavorably about her in my second phone call with him. It is a U.S. President’s absolute right to appoint ambassadors.

The initial reaction, even from several of his allies on Capitol Hill as well as conservative commentators, was disbelief that the president would try to smear a credible and likable witness while she was testifying.

Fox News, however, saw things differently. They described Trump’s attempt to besmirch and possibly intimidate the witness as “trolling.” Others have already done a good job of pointing out that the opinion-mongers on Fox News are presenting viewers with a stew of disproven conspiracy theories and things the president likes to hear, while casting doubt on the credibility of witnesses for doing outrageous things like drinking water.

But because the network’s disconnect from reality has become so comical, we thought we’d have a little fun with it.

So here are some ways we think Fox News would try to portray various things Trump has done, has suggested or could conceivably do.

Scenario 1: The president tests his theory that he could shoot somebody on Fifth Avenue and not lose any votes.

Likely spin: Fox News host Tucker Carlson praises Trump for “expressing family values at a time when so many ‘urban children’ grow up without a father.”

Scenario 3: The president authorizes the detonation of a nuclear warhead inside a hurricane.

Scenario 4: Trump announces a national initiative to fight windmill cancer, which is a thing he made up.

Likely spin: The Fox & Friends hosts applaud Trump for tackling this vitally important issue, and all of them agree that the president will succeed where Don Quixote failed, and defeat the windmills.

Scenario 5: Early next year, a foreign government releases the audio of a call between Trump and Turkish President Recep Tayyip Erdoğan that took place before he recalled troops from Syria. In that conversation, the US president promises to sell out the Kurds if he can build a resort in Anatolia with Turkish government funds.

By the way, we didn’t make the last one up. That really happened.

And, all kidding aside, here is a scenario we truly fear:

The day is Wednesday, November 4, 2020. President Donald Trump has lost the election. While it is not quite a landslide, he was soundly defeated. However, he does not concede and instead makes up completely unsubstantiated claims that voter fraud cost him the victory.

Likely spin: Realizing that their coverage has contributed to Trump’s voters believing that he could not possibly lose, Fox News doubles down and endorses the president’s conspiracy theories, leading to violence in the streets.

Thanks for reading. Enjoy the rest of your Sunday, and don’t forget to thank Donald Trump for this day off.