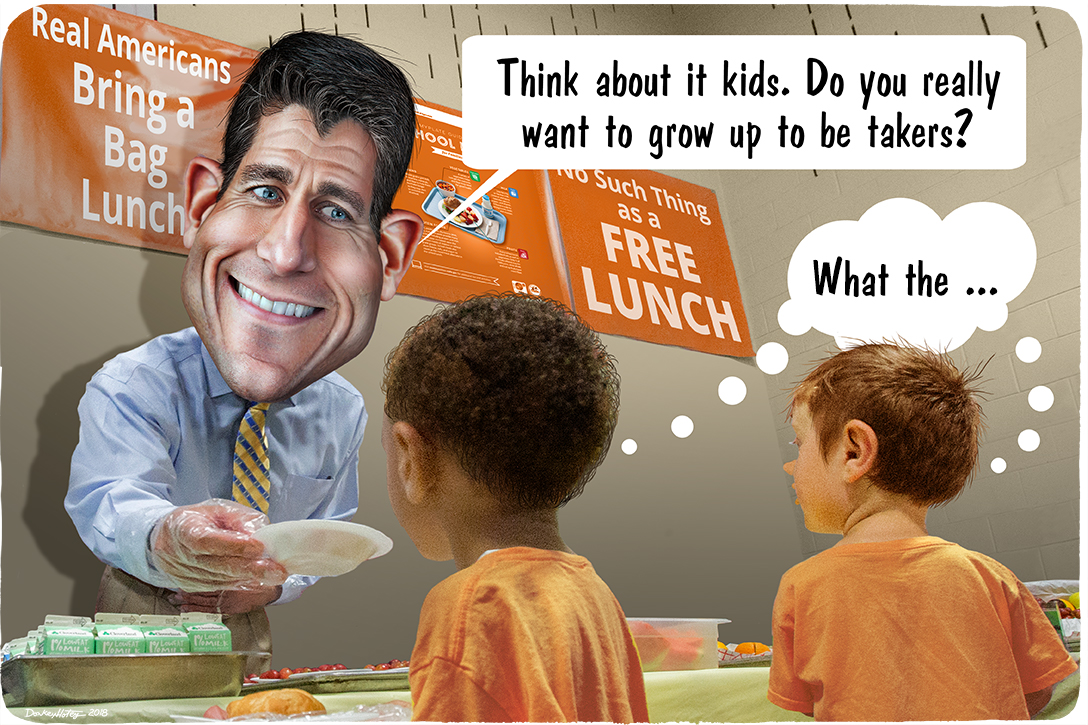 Farewell to a Hypocrite

Mary Jackson stands for many of the things conservatives don’t like about the way the US operates these days. She began getting government checks from the time she was 16 and used the money to go to college. Taking advantage of her personal connections, Jackson then scored a government job. After working on and off in different positions there — interspersed with brief stints in the private sector — she finally got a cushy job in Washington and kept drawing a government paycheck for the next 20 years. A lot of the people she worked with couldn’t name a single productive thing she did in all that time. On the contrary. Now at age 48, she will retire and get a nice pension for the rest of her life.

Actually, we made up Mary Jackson. The above paragraph, however, accurately sums up the career of House Speaker Paul Ryan, who announced his retirement this week — praised by the same conservatives who complain about ineffective taxpayer-funded programs, entitlements, and lazy government workers.

Obviously, the point of this little exercise is not to suggest that Ryan shouldn’t have gotten all that taxpayer money he received. For example, his father died when he was 16 and, subsequently, he was eligible for and collected Social Security benefits. Ryan used that money to pay for college.

That’s exactly what is supposed to happen. His family was dealt a blow and lost a source of income. Fortunately, there was a government program that helped young Paul Ryan go to college. Without that money, that might not have happened and he would have been denied the opportunity to become House Speaker. No matter how you feel about his politics, the system worked to assist a deserving young man.

So this isn’t about Ryan being a “burden to the taxpayer.” Rather, it’s about him being a huge hypocrite because he has spent his entire career in government trying to deny others the same opportunities he had.

Ryan’s biggest regret is probably that he didn’t completely gut Social Security, Medicare, and Medicaid. It certainly wasn’t for a lack of trying. And because his crowning achievement — passing last year’s “tax reform” legislation — will permanently rack up huge deficits, Republicans will keep trying to make his dream come true by “balancing out” the money they need to give to corporations by making cuts to “entitlement” programs.

It’s entirely fitting that Ryan is calling it quits to cash in right after shepherding a tax cut for the rich through Congress. The big question everybody is asking: what’s he  going to do now?

We have some suggestions for potential jobs based on his experience and passions:

Whatever it is that he will be doing next, it would save taxpayers some money if he would do it right now.

According to congressional rules, the pension of a lawmaker “depends on years of service and the average of the highest three years of salary.” In Ryan’s case, he got a huge pay increase after he was elected as House Speaker in October 2015. That means, if he leaves office before that date, his pension would be noticeably smaller because, as Speaker, he makes $50,000 more per year than rank-and-file members.

Therefore, if Ryan were to retire now, his pension would be calculated based on a three-year average of $207,000. If he serves out this lame-duck term, however, the pension would be based on an average of $223,500. We’re not holding our breath because, for Ryan and others like him, it always seems to be easier to preach something than to practice it.

The cartoon above was created by DonkeyHotey for WhoWhatWhy from these images: Paul Ryan caricature (DonkeyHotey / Flickr – CC BY 2.0), cafeteria (U.S. Department of Agriculture / Flickr), and sign (USDA).