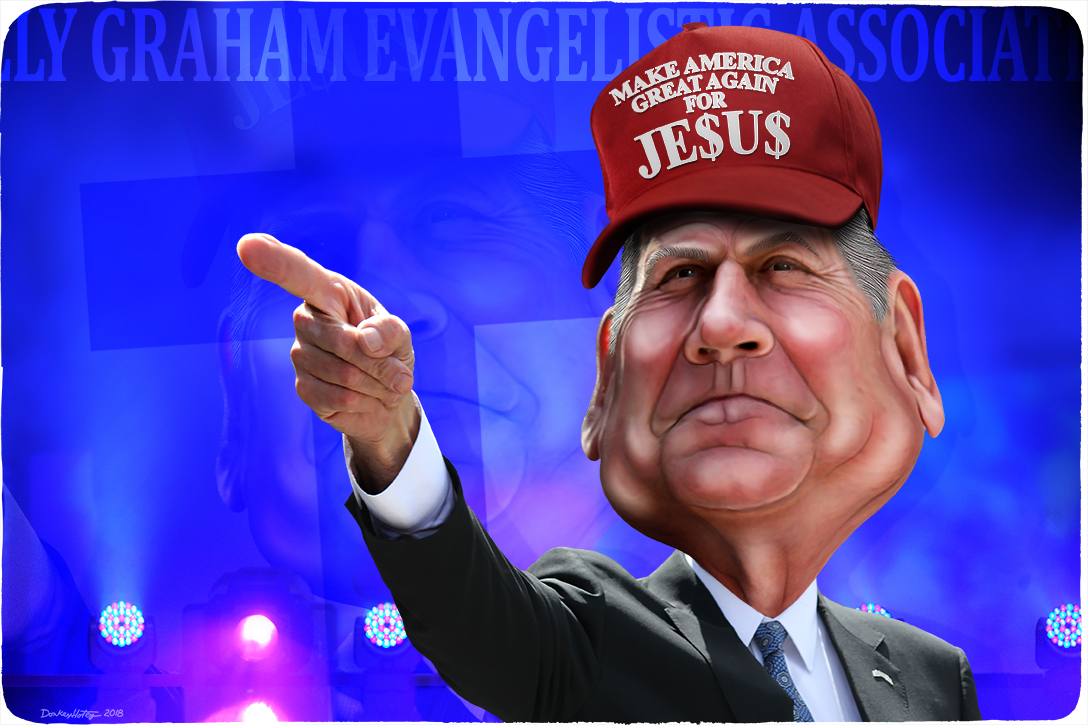 Evangelicals: Putting the ‘Ass’ in ‘Compassion’

A Pew Research Center survey last week found that the group least likely to say that the US has a responsibility to allow refugees into the country were white evangelical Protestants. It’s ironic that the same people who claim to embrace the teachings of a Middle Eastern refugee from 2,000 years ago are now most eager to slam the door shut in his face.

“This is heartbreaking and embarrassing,” responded Daniel Akin, the president of the Southeastern Baptist Theological Seminary, on Twitter. “This is not the spirit of our Lord Jesus.”

The findings may be embarrassing, but they are also entirely consistent with what many white evangelical Protestants have become — or what they always were: members of a cult that couldn’t care less about the central tenets of the faith they claim to represent.

And while the survey results may not be in the spirit of Jesus, they are absolutely in the spirit of many of the movement’s leaders: a bunch of hypocrites who seek power and wealth above all else and to whom the phrase “turning the other cheek” seems to mean that they want to have their butts kissed, from both sides, by politicians looking for help in attracting “values voters.”

Last year, President Donald Trump made it easier for them to do just that. He signed an executive order directing the executive branch to make it easier for churches to engage in political speech. Essentially, it allows “any individual, house of worship, or other religious organization” to endorse or oppose candidates from the pulpit without fear of losing their valuable tax exempt status.

Obviously, as with most of the things he has done in office, this is very much self-serving since many prominent evangelical leaders went all-in for Trump.

In doing so, however, they might be hurting themselves in two ways. First, when you back somebody like Trump, you pretty much concede the moral high ground for the foreseeable future. We have written about this “unholy alliance” in the past, so let’s focus on the second way in which this might backfire.

There are several reasons why evangelical leaders can afford their lavish lifestyles. One is that they manage to con enough people into giving them money. Televangelist Jesse Duplantis, for example, made news this week when he said God told him to purchase a $54 million plane. Chances are he’ll find enough suckers to help him buy one.

But another big reason is that churches, many of which now resemble Temples of Mammon rather than places of worship, are tax exempt. Generally, there is no problem with that as long as the church or religious group does “church things.” And even if some televangelist ends up being the main beneficiary of congregants’ donations, the harm to the general public is low.

However, the separation of church and state is one of the core principles on which the US was founded, so when a religious group crosses that bright red line into politics, it should literally pay the price — in the form of taxes.

This year, the possibility of that becoming an issue seems greater than in the past. By behaving even more overtly political — emboldened by Trump’s executive order — evangelical leaders might just go so far that the public will start paying attention and, ultimately, demand action.

Take Franklin Graham, the son of “America’s Pastor,” the late Billy Graham. The young Graham believes God put Trump in office, and he is a frequent defender of the president’s various transgressions. He is currently touring California to get evangelicals to vote against Democrats. Most of the time he manages to say the right thing — carefully skirting the line of not being too overtly political.

His goal, he says, is to take on the “blue wall,” i.e., the bastion of progressivism that stretches along the entire West Coast. However, he stresses that he doesn’t want to do so for political reasons.

“I want to pierce that blue wall for Christ,” he told a crowd in Escondido. However, Felix Martin del Campo, a board member of Graham’s international humanitarian organization, Samaritan’s Purse, minces his words less carefully; he indicated in an interview with the New York Times at one tour stop that the goal is for California to go red again.

Graham himself says, “Churches have got to get behind this” and must “get involved politically.” This week, he is leading the way. His 10-stop “Decision America” tour is pretty much set up like the barnstorming campaign of a candidate for state office; and it ends on June 5, the day of the crucial California primary.

As we get closer to the midterms, and certainly the 2020 election, it stands to reason that evangelical leaders will once again put all their chips on the GOP and Trump. The more vocal they are, the more overtly they are campaigning, the greater is the chance that people will start paying attention to the fact that many “ministries” now resemble arms of Trump’s political machine or conservative super PACs.

And hopefully it will dawn on them that people like Graham are not the spiritual leaders they claim to be, but rather have become something akin to political operatives and, as such, the organizations they lead should not qualify for tax-exempt status.