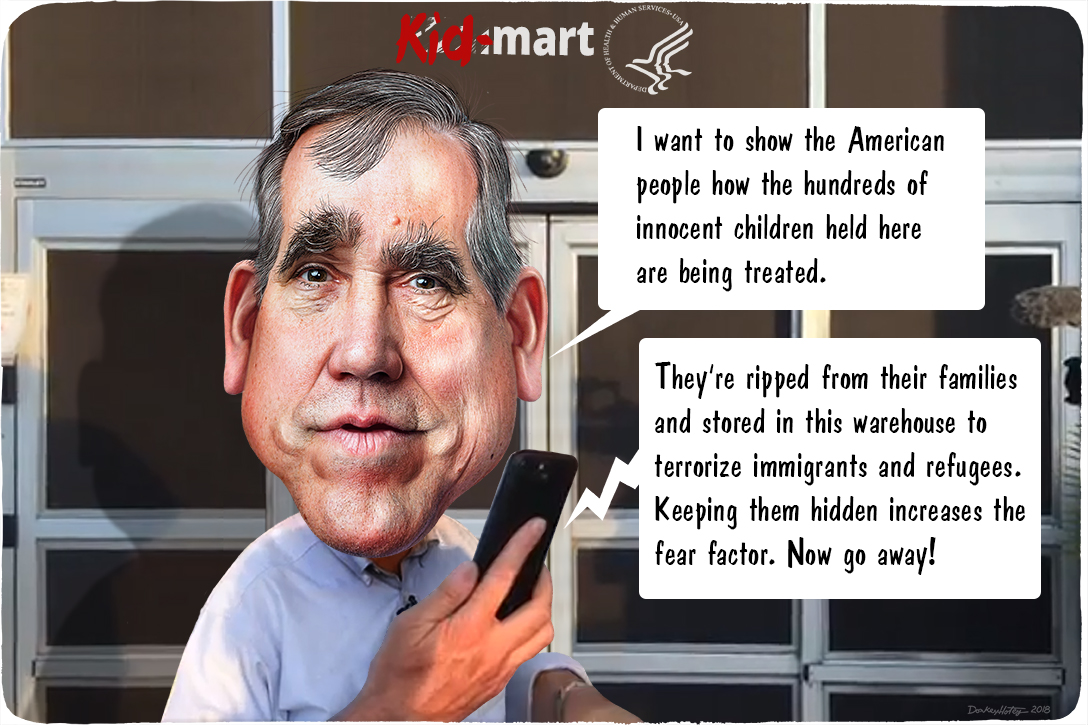 I cover US politics for a living and, with less than five months to go before the crucial midterm election that will determine whether American voters will impose some checks on President Donald Trump, I couldn’t tell you what the Democrats’ platform is… or their plan for winning this November.

Instead of coming up with policies that will change the lives of Americans in a meaningful way — as well as a strategy of telling voters about them — they keep getting sucked into the Trump trap.

The president will do or say something that is so ridiculous or reprehensible that Democrats are sure that, this time, the public will surely realize that he is a know-nothing liar and demagogue who is destroying the US from within.

But it won’t happen. Anybody who hasn’t cared this far won’t start now, and the people who do care are already enraged. The ones in the middle are probably just numb from the avalanche of scandals and lies. In the end, they are going to make their decision based on what they think is best for them.

This is where Democrats have to compete for votes. Being against Trump clearly is not enough. They need to explain to Americans how they will make their lives better.

Contrary to what they might think, that could prove to be difficult.

Independents are now feeling more confident about the economy than before Trump’s election and they also believe that current economic conditions have improved since then. It’s not hard to see why. The unemployment rate is down to 3.8 percent and the stock market rose sharply in the year following the election, peaking at 26,616 points in January of this year. Those are probably the two numbers most people look at when trying to evaluate the state of the economy.

Trump has loudly taken credit for both even though he inherited 75 months of job growth from Obama, the Dow Jones has fallen nearly 1,500 points since its peak, and his record in both areas isn’t actually better than that of his predecessor.

In addition, the president and the Republican majority in Congress pushed through a tax cut that increased the paychecks of many Americans, and Trump has touted anecdotal evidence that companies have given employees bonuses. Since the Democrats opposed the legislation, any credit for the increase in take-home pay therefore goes to the GOP.

Of course, most people won’t look beyond those extra dollars. If they did, they would realize that their tax cuts are temporary — while the much larger cuts for corporations are permanent.

Or they would realize that the GOP wants to pay for those tax cuts by gutting services that help ordinary Americans, which means that, in the end, they will end up getting screwed.

Or they would wonder why corporations are paying bonuses in election years instead of raising pay, which would be a less noticeable but more permanent benefit.

But politics is no longer about explaining complex issues to voters. It’s about buzzwords and “winning the message war.” And with Trump monopolizing the so-called “earned media,” Democrats have a steep mountain to climb to make the case that the economy is not doing as well as the president would have voters believe.

Higher insurance premiums are another problem for Democrats. While part of the expected increases can be attributed to the elimination of the individual mandate and uncertainty of what will happen next, the time required to explain that to the average voter probably exceeds their attention span. It’s tough to blame the GOP for the higher costs associated with a program most commonly known as Obamacare.

They do have an opening when it comes to gas prices, which have shot up under Trump. The recent spike can be attributed to the president’s decision to pull out of the Iran nuclear agreement.

But, unless Trump is dumb enough to start full-blown trade wars with China, Canada, Mexico, the EU, and whoever else, the Democrats have got their work cut out with regard to so-called pocketbook issues.

Still, that’s what they have to relentlessly focus on — because it’s pretty clear that the voters in the middle seem pretty indifferent about the long-term damage the Trump administration is doing to the environment, international relations, the national debt, etc. Most Americans simply don’t understand any of that — or they don’t care because it doesn’t personally affect them right now.

A great example is what’s happening at the border. There is no question that the administration’s “zero tolerance” policy, which separates the children of undocumented immigrants from their parents at the border, is cruel and inhumane.

And Democrats have seized on that issue, for example Sen. Jeff Merkley (OR), who traveled to Texas to visit a detention facility in Texas and was denied access. Good for him — and, of course, this is something that deserves our attention. As do dozens of other issues. But they are not going to get voters to the polls.

Trump supporters will likely applaud the policy, progressives are already up in arms 24/7 about everything that is going on, and independents don’t care enough to vote based on the agony of immigrants, or the gutting of environmental rules, the alienation of traditional allies, etc.

So, if they want to win in November, Democrats have to focus on issues that directly affect regular Americans. More money in their paychecks, lower prices at the pump, better education for their kids. Anything else is just a distraction. And it can’t all be about Trump. People are tired of the negativity, so they need to offer a positive vision for America.

Yet, with five months to go, there is no sign that they are working on anything like the above. A recent poll asked independents which issues they heard Democrats talk about the most. The top three were gun control, Trump’s record, and immigration. The economy didn’t crack the top five. Based on those numbers and the apparent lack of a plan, we can safely assume that Democrats will do what they usually do in “must win” elections: screw it up.

The cartoon above was created by DonkeyHotey for WhoWhatWhy from these images: Jeff Merkley caricature (DonkeyHotey / Flickr – CC BY 2.0) and HHS logo (HHS / Wikimedia).