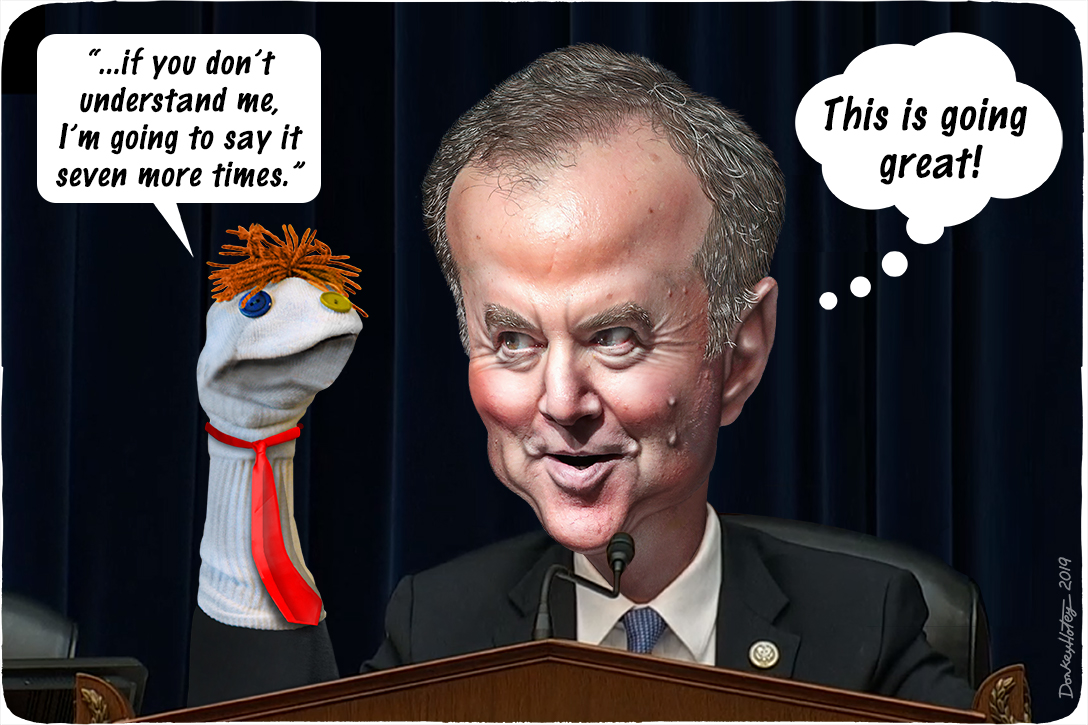 An increasingly unhinged President Donald Trump started the week by suggesting that Rep. Adam Schiff (D-CA) is guilty of treason and should be arrested. While that is, of course, completely nuts, what Schiff did was so dumb that you would have thought he headed the House Stupidity Committee, and not the Intelligence panel.

Here is what happened: Schiff began the first hearing on Trump’s attempt to strong-arm a foreign government into digging up dirt on one of his political opponents by embellishing a conversation between the US president and his Ukrainian counterpart Volodymyr Zelensky. There was absolutely no need to do that. He could have simply read the part of the transcript that was released.

Trump’s own words are extremely damning. They make it very clear that the US president — again — wants a foreign leader to help him win an election, and it remains a mystery why the White House thought it would be a good idea to make parts of the call public.

However, it’s equally baffling that Schiff thought it would somehow benefit his cause to put words into Trump’s mouth. It does the opposite.

As we have noted before, one thing the president does really well is play the victim. Schiff gave him an opportunity to do just that. Trump is also very good at deflecting and obfuscating the truth. Schiff also made that possible.

Predictably, the president and his allies have seized on Schiff’s foolishness to cast doubt over the entire investigation. Rep. Andy Biggs (R-AZ) introduced a resolution to censor Schiff that says he “misled the American people” and made “a mockery of the impeachment process, one of this chamber’s most solemn constitutional duties.”

Even during the hearing, Republicans began to criticize their Democratic chairman. Schiff appeared to realize that he had made a mistake when he clarified that his summary of the call “was meant to be, at least part, in parody.”

For his part, Trump has been referencing Schiff’s opening remarks in tweets since the day of the hearing. This is the most notable one:

Rep. Adam Schiff illegally made up a FAKE & terrible statement, pretended it to be mine as the most important part of my call to the Ukrainian President, and read it aloud to Congress and the American people. It bore NO relationship to what I said on the call. Arrest for Treason?

A lot of that is the usual nonsense we have come to expect from Trump. It was not illegal for Schiff to say what he did. It is also categorically false to claim that the summary of the call “bore NO relationship” to what the president said on the call. It was actually fairly close and it accurately reflected the message Trump was sending. Finally, it’s laughable to say Schiff’s remarks were treason or could lead to his arrest.

However, if you strip away the insane parts, Trump actually has a point. Schiff did make up a partially false version of the call and, to those who hadn’t read the partial transcript, it wasn’t apparent whether he was quoting from it.

It would be easy to say: “Why does it matter? Trump lies all the time.” While that’s true, the impeachment process is no joke. If the Democrats want that process to succeed — which means convincing a large proportion of Americans that it is necessary and supported by overwhelming evidence — they have to be near perfect. At the very least, they have to be better than Trump. Granted, that’s not a high bar.

But these types of unforced errors are all that the president and his allies have left. With devastating revelations each day on how Trump is abusing his office, they have little else to cling to.

And keep in mind that one of those allies is Fox News, an enterprise that will help obscure the truth for as long as that is profitable. To all of them, Republicans and the right-wing media, Schiff’s stupid stunt is a perfect distraction because they don’t have to address what Trump did and how wrong it was.

Related front page panorama photo credit: Adapted by WhoWhatWhy from the US House.