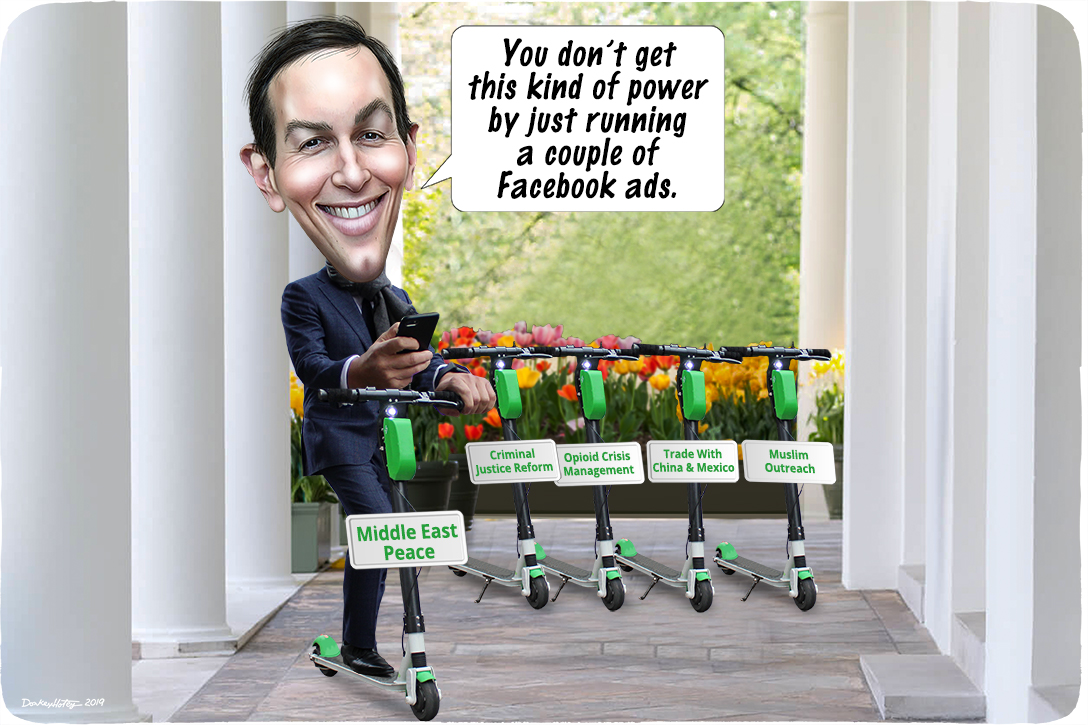 Jared Kushner’s suggestion that Russian interference was limited to “buying some Facebook ads” is akin to claiming that all the US did in Vietnam was send some military equipment.

Even if it weren’t a blatant, easily disprovable lie, it would still not change the fact that a foreign power, using illegal means, sought to interfere in a US election on behalf of the candidate it felt would be more pliant to its strategic goals.

However, as we have known for a long time — and the Mueller report confirmed again — Kushner’s statement is completely false. The Facebook ads were the smallest part of Russia’s campaign in favor of Donald Trump.

The biggest (that we know of) was the hacking of Democratic email accounts and finding a way to feed that information to the US public in a drip-drip fashion. Thanks to the compliant WikiLeaks as well as the equally compliant corporate media, there were nearly daily front page stories about the not-really-all-that-salacious details of those emails from the Democratic convention onward.

In short, Vladimir Putin played American journalists like a fiddle.

It’s impossible to quantify the impact of Russia’s meddling. We simply don’t know, for example, how many supporters of Sen. Bernie Sanders (D-VT) stayed home or voted for somebody else because of the (not really surprising) revelation that the Democratic National Committee wanted Hillary Clinton to win. Would these voters have made the difference in states like Pennsylvania, Michigan, or Wisconsin? We will never find out.

The same is true for independents who felt that they could not choose between two bad candidates.

But it would be ridiculous to argue that not a single voter was swayed by the month-long, generally negative coverage of those emails. Not surprisingly, Trump and his cohorts are trying to make exactly that claim. In the coming months, you’ll hear it a lot.

The reason why he keeps saying that Russian interference made no difference is that there may not be an issue that the famously thin-skinned and vindictive US president feels more insecure about than the legitimacy of his election. And that’s saying something.

He is in complete denial that he got a huge assist from Putin, and that’s a real problem.

While the US government itself is guilty of interfering in elections abroad, sometimes in a way that was far more deadly than what Russia did, the president’s nonchalance about the fact that Putin’s regime massively helped him is still deeply troubling.

Because if the commander-in-chief does not even want to hear about election security, then how can this administration fight the problem which, according to Deputy Attorney General Rod Rosenstein, is bigger than anybody thinks?

“The bottom line is, there was overwhelming evidence that Russian operatives hacked American computers and defrauded American citizens, and that is only the tip of the iceberg of a comprehensive Russian strategy to influence elections, promote social discord, and undermine America, just like they do in many other countries,” Rosenstein said Thursday.

Add to that the ham-handed attempts of Trump’s team to get Russian help in 2016, and the result is one certainty: Putin will do it again next year.

And why wouldn’t he? It’s as though somebody robbed a bank and, instead of being held to account, they are invited back. That’s not hyperbole. Just consider what Rudy Giuliani, Trump’s lawyer/confidante/surrogate, told CNN this week: There is “nothing wrong” with accepting information from the Russians (hint: It’s highly illegal).

While administration officials insist that they have made it more difficult for Putin’s regime to interfere in 2020, those claims ring hollow in light of the statements from Kushner and Giuliani — and Trump’s complete dismissal of the threat.