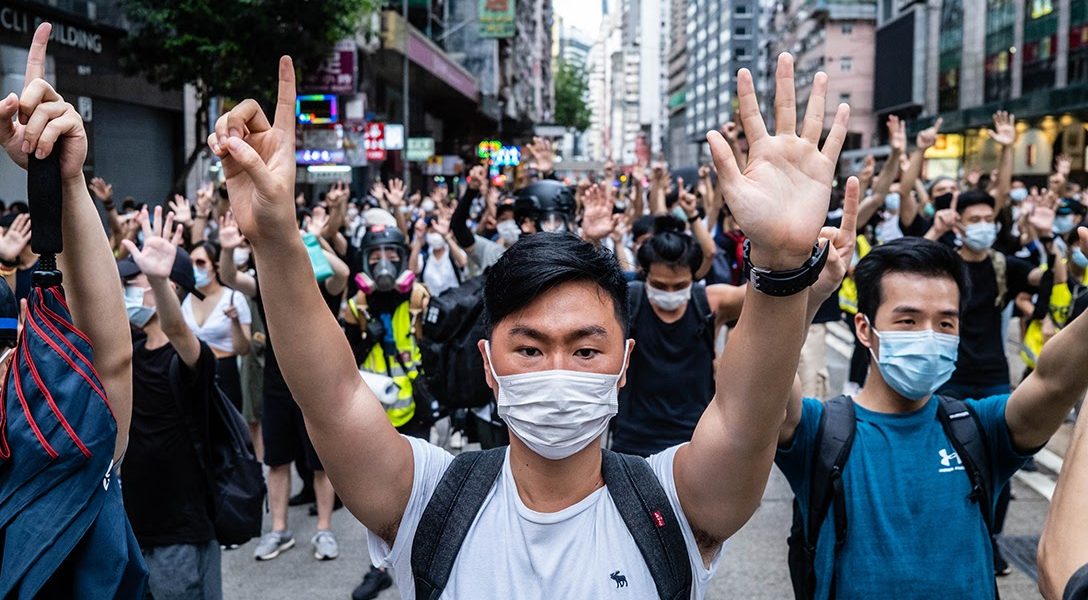 Demonstrators make gestures of one and five fingers, symbolizing the demands of the protest movement, on July 1, 2020, in Hong Kong. Following the passing of the National Security Law that tightens freedom of expression, Hong Kong protesters marched on the streets to demonstrate. Photo credit: © Willie Siawillie Siau/SOPA Images via ZUMA Wire
Government Integrity Opinion

As America celebrates its independence, Hong Kong residents are surrendering their own. On June 30, draconian new “security” measures for the Chinese territory took effect, and a pro-democracy effort that had drawn worldwide attention quickly began to fade away.

Within minutes of the law being implemented by the mainland government, even before its details were revealed, activists pulled back from direct confrontation with Beijing. Some vowed to continue their fight from abroad.

“Under this legislation Beijing just passed about 24 hours ago, anyone who would dare to speak up would likely face imprisonment,” prominent activist Nathan Law told a US congressional hearing via video link. “So much is now lost in the city I love: the freedom to tell the truth.”

Law said in a Facebook post July 2 that he had already left Hong Kong for an undisclosed location. “As a global-facing activist, the choices I have are stark: to stay silent from now on, or to keep engaging in private diplomacy so I can warn the world of the threat of Chinese authoritarian expansion,” he said.

China’s decision to flout a provision in Hong Kong’s Basic Law, which took effect in 1997, that Hong Kong’s 7.5 million residents would enjoy limited freedom and self-government for 50 years, has important consequences for the US and other countries. One key question: Can China be relied on to keep any of its promises?

Within a few years, China will have the world’s largest economy, and millions of people have been lifted from poverty since its Communist government embraced state-directed capitalism in the 1990s. But China is also the world’s largest dictatorship, where President Xi Jinping has already amended the constitution to allow his rule indefinitely, with his plans and decrees endorsed by a rubber-stamp National People’s Congress.

For most Chinese, so-called freedom of expression requires avoiding a host of topics, even code words, that run afoul of the Great Firewall, with an army of censors quickly deleting “improper” postings. And from the tame print and broadcast media, when it comes to government and policy, seldom is heard a discouraging word.

For Hong Kong, it wasn’t supposed to be like this. Under the “one country, two systems” agreement that returned the territory to China in 1997 after 156 years of British colonial rule, Hong Kong became a Special Administrative Region. Its new Basic Law, in effect a mini-constitution, was to extend until 2047, protecting rights such as freedom of assembly and freedom of speech.

No longer. The new regulations are ostensibly directed against subversion, sedition, terrorism, and collusion with foreign entities, but could easily be applied more broadly to include various forms of speech or organizing. The July 1 anniversary of Hong Kong’s return to Chinese rule typically draws enormous crowds of protesters, but this year, only a few thousand brave people showed up. Police wasted no time implementing the new law, arresting 10 people under its provisions, including a 15-year-old girl waving a Hong Kong independence flag.

Pro-democracy leaders of the Umbrella Movement — huge protests in Hong Kong beginning in 2014 that eventually led to the Chinese crackdown — are fleeing the territory or going underground. Demosisto, the largest pro-democracy party, decided to disband after three leading members stepped down. Two other independence groups, the Hong Kong National Front and Studentlocalism, said they would wind down Hong Kong operations but continue operating from abroad.

Even before details of the new Hong Kong legislation were revealed, the UN human rights commissioner, Michelle Bachelet, had warned China to respect individual freedoms. “Such laws can never be used to criminalize conduct and expression that is protected under international human rights law,” she said.

China doesn’t seem to be paying attention. The government also has cracked down on dissent by restive Uighurs and other Muslim minorities in the far west region of Xinjiang, with up to 1 million people detained in so-called vocational training centers.

In Tibet, which China rules as an “autonomous” region, protesters seeking greater freedom are routinely arrested and — according to human rights groups — tortured. Buddhism is seen as a threat to China’s sovereignty, and followers of the exiled Dalai Lama risk prison, or worse, if caught with his photo or teachings.

Beyond human rights criticisms, many nations have reason to be suspicious of China. The central government is widely believed to have covered up the initial COVID-19 outbreak in 2019. Critics accuse China of failing to enforce intellectual property rights or stealing intellectual property outright, bullying countries where it provides development aid, disregarding international standards for the safety and purity of food and drugs, and using flexible laws and compliant judges to ensure that in commercial disputes, Western companies usually emerge on the losing side.

The country is also beefing up its military and becoming more assertive, especially on the high seas. China has disputes with many countries — including Indonesia, Malaysia, the Philippines, Vietnam, and Taiwan — about ownership of small islands scattered throughout the South China Sea.

The legislation clamping down on Hong Kong creates even more opportunities for international outrage. Article 38 says the law can apply even to offenses committed “outside the region by a person who is not a permanent resident of the region.”

An online news site in India — a nation already at odds with China for many reasons, including fatal military skirmishes along a disputed border — notes that “if an Indian citizen sitting in India says something overly critical of the Chinese government on Twitter,” under the new law “they could be arrested if they ever traveled to Hong Kong.”

Despite US criticism of China’s human rights record, doubts about the security of Chinese high-tech equipment, President Trump’s on-again-off-again threats to levy more tariffs on Chinese products, rejection of China’s territorial claims, and many other disagreements, few observers expect a military conflict between the two powers. But the wild card could be Taiwan, the island nation formed by Nationalist forces that fled the mainland in 1949 after their defeat by Mao Zedong’s Communists.

China still seeks reunification with its much smaller, independent neighbor, insisting there is only “one China”; some have suggested making Taiwan a special administrative region like Hong Kong. Some analysts say the reason China waited so long to crack down on the former British colony was to ease Taiwanese fears over possible reunification.

Today, that shield for Taiwan, if it ever existed, is gone. And the global community should have few illusions about China’s willingness to be ruthless in pursuit of its goals.

“We’re so afraid of what happened in Hong Kong,” said Mei Li (not her real name), a 7-Eleven store manager and English tutor who lives a few miles from Taiwan’s main international airport. “My students are so worried and so young. They ask if mainland China [forcibly] unifies us, what’s going to happen?” she told WhoWhatWhy.

While the US could come to Taiwan’s defense if China attacked, it’s not automatic and would require a decision back in Washington. Many observers inside and outside the country doubt whether the US would be willing to intervene militarily.

“I don’t think so if the president is Trump,” said Li. “Maybe President Reagan would have, but not Trump.”

In her memoirs, British Prime Minister Margaret Thatcher said Chinese leader Deng Xiaoping boasted to her in 1982 that he could take over Hong Kong in a day, if he wished. “I retorted that they could indeed do so; I could not stop them,” Thatcher wrote. “[But] the world would then see what followed a change from British to Chinese rule.”