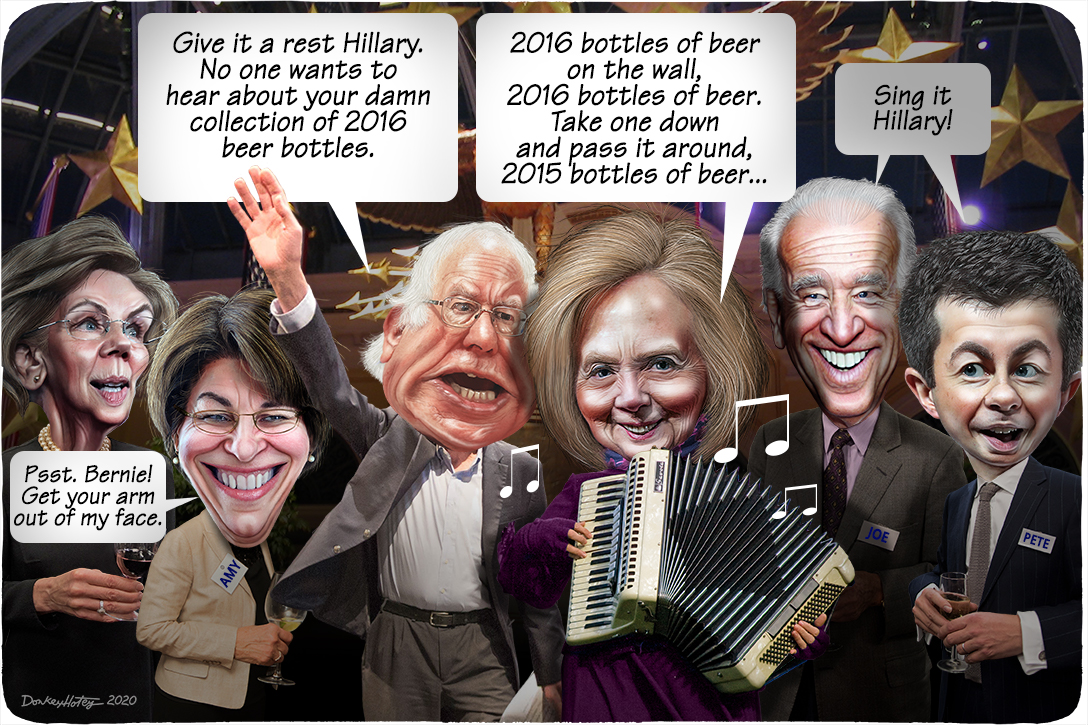 In this super-charged political environment, imagine a group of 30 people with — at times widely — different views coming together to discuss politics. Imagine further that they have been given the means and opportunities to attack each other over those viewpoints, and that they are all competing for one job. Finally, and this might seem like the biggest stretch, imagine that all of them refrain from doing so and are staying entirely civil. Sounds impossible?

Actually, it’s not. By and large, the above describes the Democratic primary. Sure, there have been debates over policy differences and minor spats, but all of the candidates have stayed positive in their ads and their interactions with each other.

Compare that to the 2016 GOP primary. By this point, various candidates had called Donald Trump “unhinged” (Jeb Bush), a “pathological liar” (Carly Fiorina), a “xenophobic, bigoted carnival barker” (Lindsey Graham), “reckless, clueless and irresponsible” (John Kasich), and “un-American” (George Pataki). Kudos, to them, by the way. They were spot on.

You also had Ted Cruz suggest that Trump might wake up one morning and nuke Denmark (not too far off — he just wanted to buy part of it, and who knows how close he was to attacking them after being ridiculed and rejected). In addition, Cruz called Trump a “sniveling coward” for insulting the looks of his wife.

Then, of course, there was Marco Rubio suggesting that Trump was not well endowed.

In turn, Trump had criticized the looks of one opponent (Fiorina), called another “crazy” (Ben Carson, who now serves in Trump’s cabinet), and another an “idiot” (Graham, who now serves as his bootlicker). Add to that Trump’s other insults directed at Rubio (“Little Marco”) and that he suggested that Cruz’s father helped Lee Harvey Oswald kill President John F. Kennedy.

To be fair, a couple of these things happened after mid-January, but you get the picture.

The Democratic primary couldn’t be more different. Sure, the candidates disagree on policy, but there are no personal insults, no attack ads. Nobody is calling anybody else ugly or suggests their parents participated in assassinations. Nobody’s anatomy has come into play and all candidates are displaying a healthy level of respect for each other.

They all seem to understand that getting the nomination is worthless if Trump wins reelection. And, with the possible exception of Rep. Tulsi Gabbard (D-HI), you never get the feeling that they are not committed to go all out to help the eventual nominee.

This was evident last week when Trump tried to drive a wedge between the candidates by insinuating that Sen. Bernie Sanders (I-VT) will have the nomination stolen from him because he is forced to leave the campaign trail to participate in the president’s impeachment trial.

While that argument makes no sense in the first place — not least because Sens. Elizabeth Warren (D-MA) and Amy Klobuchar (D-MN) also have to be in Washington — Sanders’s response was telling.

“Let’s be clear about who is rigging what,” he said in a statement. “It is Donald Trump’s action to use the power of the federal government for his own political benefit that is the cause of the impeachment trial. His transparent attempts to divide Democrats will not work, and we are going to unite to sweep him out of the White House in November.”

So even if the nominee were a moderate Democrat, there is no doubt that Sanders will work hard for them. Conversely, if the Vermont senator were to win the nomination, former New York mayor Michael Bloomberg would go all out to support Sanders, who is not exactly a fan of billionaires.

In that respect, things are looking good for the Democrats. They are certainly in a better place than during the 2008 and 2016 primaries, which were much more acrimonious. Both of those contests involved Hillary Clinton.

And, wouldn’t you know it, here she is again, stirring up trouble and disrupting an unusually harmonious primary. In an effort to promote a documentary featuring her, Clinton expressed disdain for Sanders in an interview with the Hollywood Reporter. After ripping her former Senate colleague and campaign surrogate, she left the question unanswered whether she would support him should he become the nominee.

That is pathetic. Regardless of how she feels about Sanders, or anybody else in the field, there is only one answer for any Democrat to the question: “Will you support the eventual nominee?” And that is a resounding “Absolutely! I will do everything in my power to rid our beautiful country of Donald Trump and the rest of his cult.”

What is especially inexcusable is that Clinton is a pro and she knew exactly which part of her interview would make the headlines. That she said what she said regardless indicates that it was a deliberate attempt to influence the primary. If she feels that strongly about it, then she should just endorse somebody.

Even better, though, she should heed our advice from 2017 and just leave the political stage altogether.

To Sanders’s credit, he did not make a big deal out of it.

That’s really important because he, and all of the other candidates still running, have to make sure their supporters are not disillusioned at the end of the process.

Democrats clearly weren’t united after a contentious 2016 primary and it may well be one of the many reasons Clinton lost. But if she can’t stop being bitter about it, then she should be bitter in private and sit this one out.