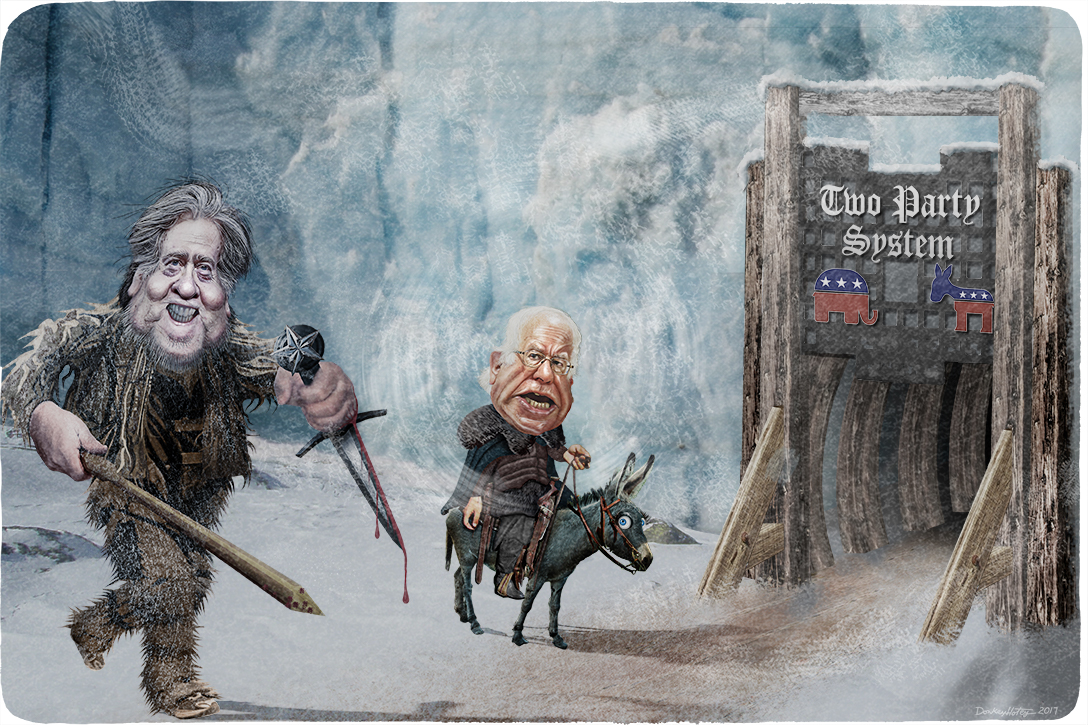 Can the Two-Party System Survive Internal and External Divisions?

The deep divisions within the US — not just between liberals and conservatives but also within each of the two major parties — are giving Americans the glimpse of a chance to rid themselves of the entrenched two-party system responsible for a big part of the country’s current malaise.

Granted, it’s still a long shot — but, for the first time in generations, there is an opportunity to upset the balance of political power in a meaningful way. In fact, there are two opportunities.

First, we need to briefly look at how we got here: Over past decades, the partisan divide in the US has increased. This is also reflected in Congress, where Republicans have gotten much more conservative on average since 1980 and Democrats somewhat more liberal — in particular on social issues.

Before the gap started widening, there was a sizeable contingent of lawmakers who were in the political center, i.e., moderate Republicans and conservative Democrats. This faction is now nearly extinct, which means that American voters whose views fall in the middle of the political spectrum are no longer represented.

One of the results of the congressional polarization is that less has gotten done. The two parties simply are too different now to agree on anything. In the rare case that a lawmaker crosses the aisle to vote with “the enemy,” a primary challenger will surely wait in the wings to try to get him or her kicked out of office. And, since it’s usually the hard-core voters who show up for primaries, such challengers often succeed — and Congress becomes a bit more partisan again.

These victories against moderate voices have also emboldened those on each party’s flank. The Tea Party now is strong enough to effectively hold the rest of the GOP hostage. On the left, the progressive wing of the Democratic Party is moving toward a position where it could soon do the same. Research shows that its 2016 primary voters were much more liberal than in the past.

The consequence is further paralysis until one side gathers enough power, like the GOP today, to unilaterally push through its ideas without much input or help from the other side. It should be noted that a big reason for the Republican dominance is the party’s control of state houses, which it has used to put in place voter suppression schemes and redraw congressional districts.

Inevitably, as these policies are more extreme than the majority of Americans are comfortable with, the pendulum is going to swing back to the other side. That’s going to continue — generally to the detriment of the country — unless the entire system is upended.

And the stars may just be lining up right now for such a radical change because, in addition to the overall partisan divide increasing, the intra-party gaps are also getting out of hand.

On the right, Steve Bannon has declared “war” on the Republican establishment. Essentially, he wants to get rid of anybody who is not willing to burn Washington to the ground. Even a very conservative voting record, for example that of Sen. Jeff Flake (R-AZ), does not protect Republicans from primary challengers anymore.

Bannon loves candidates like Roy Moore: firebrands who can defeat establishment candidates in primaries and then cruise to victory in conservative states. If it had not been for allegations that Moore dated, and in some cases molested, teenage girls when he was in his 30s, he would have cruised to victory — and he might still win.

Faultlines in the Political Landscape

And that’s where the first opportunity for a political earthquake lies. Many Republicans — except those on the fringe right, now a large faction within the GOP — are looking in horror at what is happening in the Alabama Senate race. It’s not just that Moore is a terrible candidate to them; it’s also that, the longer he grabs the national spotlight, the worse Republicans will look to anybody whose views are less extreme.

This conundrum can be summed up in Alabama Gov. Kay Ivey’s (R) statement on the race. On Friday, she said that, although she has no reason to doubt Moore’s accusers, she’d still vote for him.

“We need to have a Republican in the United States Senate to vote on the things like Supreme Court justices,” Ivey stated. In other words, a pedophile is better than a Democrat.

This puts the Republicans in a no-win situation. Either they lose a reliable GOP seat — which will also make it conceivable that Democrats could win the Senate next year — or they have to deal with Moore in their midst. Chances are that they would try to kick him out of Congress right away, but that would further infuriate people like Bannon.

Over on the other side of the aisle, things are a bit less complicated but only slightly less tenuous. The wounds from the Democratic primary continue to fester. The race between Hillary Clinton and Sen. Bernie Sanders (I-VT), as well as the debate over the role the party machine played in it, has revealed a deep chasm between a moderate and a progressive wing.

Establishment Democrats are not willing to see things change as quickly as the new generation of progressives want them to.

What all of this means is that an increasing number of Americans are fed up with the two parties — even those who are in one of them. The GOP is not conservative enough for the likes of Bannon while the Tea Party is too conservative for moderate Republicans. On the other side, progressives complain that the Democratic Party is unwilling to embrace sweeping changes that they deem necessary, while establishment Democrats are shaking their heads at the “Bernie wing.”

What Will Trigger the Shake-Up?

Things are ripe for a change. The most likely — yet still unlikely — scenario would be that the two current parties continue their move toward the edges of the political spectrum and make room for a new movement in the center. The GOP would become the Tea Party, the Democrats would become the Progressive Party and conservative Democrats and moderate Republicans would form a new group in the middle.

That would make it much harder for any of the three to dominate politics the way the GOP is right now. Instead, hopefully, there would be a greater emphasis on coalition-building and compromises that would allow the country’s pressing issues to be addressed. Common-sense legislation supported by representatives of the people would replace purely ideological laws passed along party lines. Health care could be fixed, the tax code reformed, sensible gun laws passed, infrastructure improvements enacted — in short, the work of Congress could actually reflect what a majority of Americans want.

This could actually happen. There is already some talk of a “unity ticket” to challenge President Donald Trump in 2020, which could be the spark that such a new party would need — in addition to a charismatic leader. The names of Ohio Gov. John Kasich (R) and Colorado Gov. John Hickenlooper (D), who introduced a joint health care fix in August, were tossed around as possible candidates on such a ticket but the duo has said it would not run together.

The second scenario would see each party break up into factions, one moderate and one extreme (for example, the US could end up with the Tea Party, GOP, Democrats, Progressives). This would, theoretically, require even more work across the aisles, and would marginalize those unwilling to compromise, i.e., the right wing.

While such a configuration might even be better, the only way it could happen would be for each party to split almost simultaneously, which makes it very unlikely.

It’s not just the rifts between and within the parties that would make the break-up of the Republican and Democratic political duopoly a real possibility.

In the past, one of the main problems for third parties has been funding. In politics, money usually follows power, which means that the coffers of the traditional parties and their candidates are usually full and those of non-establishment challengers empty.

But that’s no longer the case. Sanders, and to a certain extent Trump — as well as any number of “insurgent” congressional candidates on the left and right — have shown that their supporters are willing to open their wallets to help those running against the establishment.

In addition, the accumulation of wealth at the top means that there is an increasing number of billionaires on both flanks who appear willing to write massive checks to get their agendas advanced.

All that being said, how likely is the emergence of one or two new parties? It’s difficult to say but the ideological conditions for such a radical realignment are already there. The four parties mentioned above already exist. It’s just that the Tea Party still operates under the mantle of the GOP and “Bernie’s Party” is, for now, still a part of the Democrats.

Now it’s just a matter of waiting for something to trigger this political earthquake.