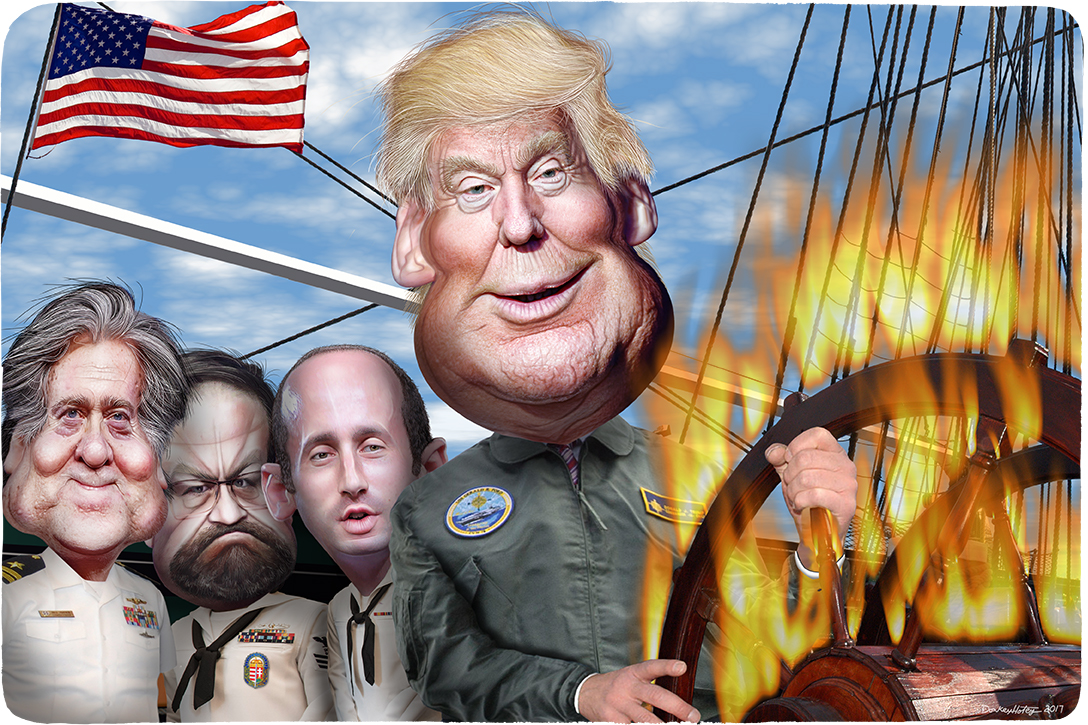 Can Trump Steer the Country When Things Go Wrong?

When President Donald Trump proclaims that his White House is “functioning perfectly” or running like a “fine-tuned machine,” it sounds as ridiculous as if the captain of the Titanic had said the same things after hitting the iceberg.

It’s tough to figure out what’s going on in Trump’s head, so maybe he really feels that way. After all, presidents live in bubbles and their communication access to the “outside” is restricted both for personal and national security reasons. But Trump is different from other presidents in that he gets his information not necessarily from briefings, but rather from Fox News, Alex Jones and other friendly news outlets.

He reportedly is even presented with a folder full of positive news about himself twice a day. Still, he must know that things in the White House are a bit chaotic.

So far it hasn’t made much difference. The people most frustrated by the dysfunction are Republican lawmakers who see their agenda stifled by a president who hasn’t shown much interest in leading the country, other than tweeting and holding rallies to adoring crowds.

It hasn’t helped them that Trump is surrounded by a bunch of amateurs. What we have learned from the first 200 days of the current administration, however, is that it really doesn’t matter all that much who is at the head of the government as long as nothing is going wrong.

That isn’t to say that Trump’s decisions so far won’t have an impact. Especially at the agency level, as WhoWhatWhy has documented repeatedly, the new administration has already decimated environmental and other protections in the name of creating a more business-friendly climate.

What we mean to say is that the day-to-day operation of the government isn’t greatly affected even when the guy at the top doesn’t understand how things work, and has shown no inclination to find out. Social Security checks are still being delivered, there is no civil unrest, the military isn’t going rogue and hundreds of government programs across the country continue to function.

The country is essentially on autopilot but that only works as long as there isn’t a big problem.

This week has provided the world a glimpse of what could happen when things go bigly wrong. Most people probably don’t know what it feels like to go to bed wondering whether a nuclear war is about to start. That is obviously an extreme example. Surely there are enough reasonable people on both sides to prevent a shooting war between the US and North Korea. Right? Right???

But there are lots of things that can happen to throw the nation into turmoil. Hurricane season has begun, so how prepared would the Trump administration be if a massive storm strikes a major city?

What about a large scale terrorist attack? Which civil liberties would be taken away this time and who will be affected? And what would Trump’s military response look like?

What about a pandemic? Or what if the economy melts down — either because the US credit rating is downgraded if the debt ceiling isn’t increased or simply because we’re once again living in a bubble economy with hardly any oversight of reckless Wall Street practices, and eventually that bubble will burst?

Will Trump and his team rise to the occasion or will they plunge the US into chaos? Your guess is as good as ours but we’d feel more comfortable if the president showed a bit more interest in how the country that he wanted to lead actually works.

Keeping a behemoth like the US afloat isn’t all that difficult on autopilot in smooth waters when the weather is nice. But what will happen when the first icebergs show up?