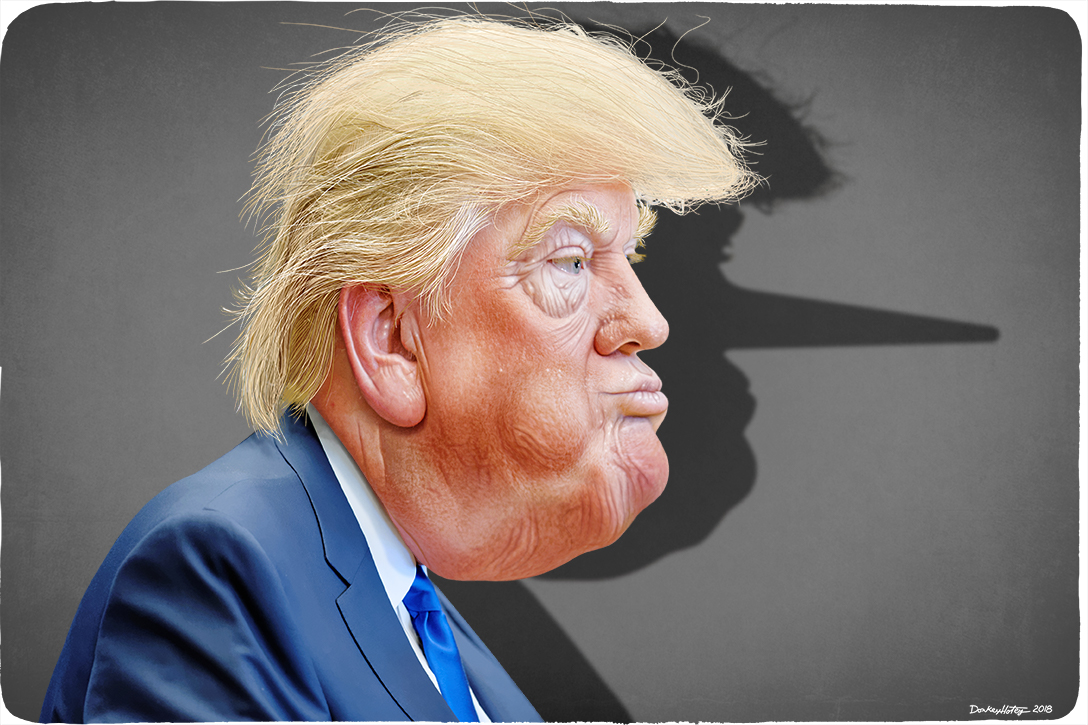 I am the least dishonest person on the planet. Believe me. Photo credit: Adapted by WhoWhatWhy from DonkeyHotey / Flickr (CC BY-SA 2.0) .
Cartoon Government Integrity Opinion

Here is something that doesn’t get said enough: Donald Trump, the president of the United States of America, seemingly can’t stop lying. It’s not that people don’t know. Everybody knows. Still, the media usually skirts around the subject that Trump is a huge liar.

The Washington Post’s fact-checking team revealed this week that Trump has made “3,001 false or misleading claims” so far in his presidency — an average of six per day.

The paper often awards him between one and four “Pinocchios” to show how far from the truth the president has strayed. Using the well-known children’s character whose nose got longer the more he lied is cute, but not at all helpful.

Because there is nothing cute or funny about the most powerful man in the world being unable to stop lying. Where is the value in sugarcoating it by saying that Trump’s statements are “false or misleading?” Sure, in some cases, he is just ignorant and doesn’t know the facts — which isn’t much better — but any sensible person would then keep their mouth shut to make sure they don’t say something false. Trump lacks that sensibility — or any type of filter that keeps him from lying constantly. He also keeps repeating lies that have already been disproven, which is clear evidence that this isn’t just about him being clueless.

Trump lies so much that he has overwhelmed the system. The media seems to be unable to deal with the tsunami of bullshit coming out of the president’s mouth.

So when Trump tells yet another lie, it barely registers.

Professional journalists are used to giving people the benefit of the doubt. Even if it seems apparent that somebody has committed a crime — for example, because they were caught in the act or there is a mountain of evidence — a credible news outlet will always put the word “alleged” in front of the supposed perpetrator’s name until he or she is convicted.

And in most cases, that is the right thing to do. After all, the word “lying” conveys intent. Can we really say with certainty whether a person meant to lie or simply misstated something, was unaware of the facts, didn’t remember something correctly, etc.? That is why journalists usually contrast a false statement with a fact to show that it is incorrect and allow readers to determine for themselves whether it was deliberate or not.

Trump no longer deserves that benefit of the doubt. In fact, every single statement of his within a news story should come with a disclaimer like, “The president is a known liar. Everything he says should be viewed in that context.”

It’s ironic that the man who was elected, in part, because his supporters like that he “says it like it is” — seems unable to actually do that.

Even his backers know — at least the ones who can tell the difference between the truth and a lie. Still, they can’t get themselves to call Trump a liar.

Earlier this week, former Pennsylvania senator Rick Santorum came close when saying “The president says things that don’t comport with the facts. I don’t like calling people liars, but the reality is this president has a problem.”

But it’s not just Trump’s problem. It’s our problem. The president shouldn’t be a compulsive liar. While that should go without saying, in this case it must be said over and over again.

At this point, how can anybody — allies and adversaries alike — trust anything Trump says? Or take him seriously?

And the president’s supporters should be the first to point this out to him. Because by discrediting himself, he is hurting them. However, since Trump is not just a world-class liar but also vindictive, they are all too afraid to speak truth to power.

On Thursday night, Fox News host Neil Cavuto pointed out a bunch of Trump’s lies and he still couldn’t get himself to call the president a liar.

On the closest thing to state TV the US has ever seen, Cavuto said Trump is giving his opponents way too much ammunition.

“Maybe not intentionally. I’ll even give you the benefit of the doubt, Mr. President, and say, maybe not deliberately,” Cavuto stated in a four-minute monologue. “But consistently. Way too consistently.”

A bit later he was even clearer — and still stopped short of what needs to be said often and loudly.

“I’m not saying you’re a liar, I’m just having a devil of a time figuring out which news is fake,” Cavuto said. “Let’s just say your own words on lots of stuff give me, shall I say, lots of pause.”

This got Cavuto a lot of praise but isn’t this what any journalist should be doing? In fact, they should be much more outspoken about the president’s lies.

Because this stuff really matters. Trump has set the bar so low and shattered so many norms that the US will be paying for it for years. Just this week, we got confirmation of something everybody had already assumed — that the letter from his doctor proclaiming Trump would be the healthiest president ever had been dictated by Trump himself.

So in addition to bucking tradition and not releasing his tax returns, and therefore depriving the public of judging his business acumen — and possible ties to shady foreign moneylenders — voters were also deprived of an objective assessment of Trump’s state of health before he was elected.

Instead, they got more lies.

Understandably, the media is a bit touchy when it comes to Trump. The “fake news” label, which he slaps on any story he doesn’t like, not only gets under the skin of good journalists but it’s also sticking with Trump’s supporters, many of whom see the press as an enemy of the state.

That’s why it’s time to shatter some norms of our own and start treating Trump differently. While coverage of the president needs to remain fair, it also has to be accurate. And that means no longer giving him the benefit of the doubt and calling out Donald Trump for what he is: the worst liar to have ever occupied the office.