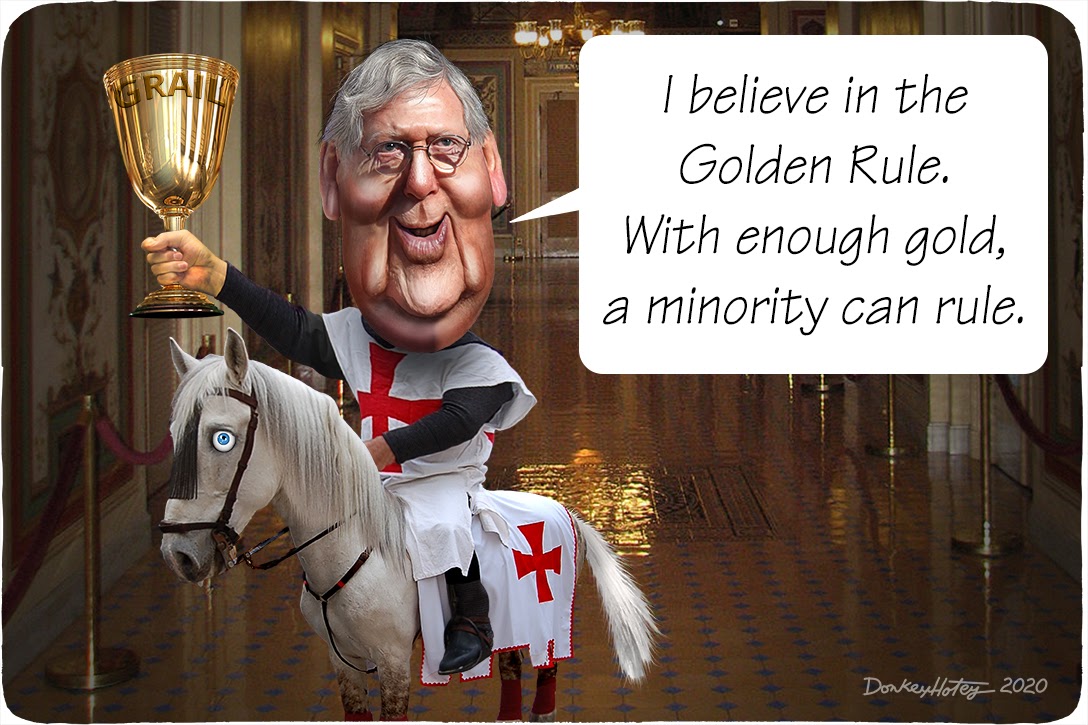 It might be days, weeks or (heaven help us) months before we learn the outcome of Tuesday’s presidential election. But the biggest winner won’t be on the ballot.

The undisputed champion of 2020 is hypocrisy — defined as claiming to have moral or religious beliefs or principles, even when you don’t.

Although the Dissembler-in-Chief has provided many reasons not to vote for him, the current undisputed hypocrisy champion is Senate Majority Leader Mitch McConnell (R-KY), supported by his Republican lackeys.

Here’s McConnell on February 13, 2016, after the death of Justice Antonin Scalia: “The American people should have a voice in the selection of their next Supreme Court justice. Therefore, this vacancy should not be filled until we have a new president.” True to his word (amazing!), he blocked any consideration of Pres. Barack Obama’s nominated replacement, Merrick Garland.

Here’s McConnell again September 20, 2020, after the death of Justice Ruth Bader Ginsburg: “President Trump’s nominee will receive a vote on the floor of the United States Senate.”

The GOP-majority Senate dutifully obeyed, approving Amy Coney Barrett’s nomination on a straight party-line vote October 26, eight days before the election. (Indeed, in many states the election, thanks to early voting and mail-in ballots, was already well under way.) Barrett was sworn in hours later, soon enough to join a conservative court majority that could be asked to resolve election disputes — and all things Trump.

“The credibility of Jesus has been marred by the hypocrisy of his namesake’s religion.”

Every Republican voted to approve the nominee, even Utah’s Mitt Romney, who previously had demonstrated occasional integrity and willingness to cross swords with the president. Two other Republicans, Susan Collins of Maine and Lisa Murkowski of Alaska, initially said they didn’t believe the Senate should consider a high court nominee before the election, but when push came to shove, they joined their GOP brethren. Even Lamar Alexander of Tennessee, who is retiring and could have taken a stand without fear of political repercussion, voted aye.

Christians regard hypocrisy as a major sin — except when committed by somebody whose political views match their own. As one observer noted, “The credibility of Jesus has been marred by the hypocrisy of his namesake’s religion.”

Among those embracing situational ethics are the Bible-thumping hypocrites who demand a return to “traditional values” but have no difficulty overlooking Trump’s record of serial philandering, or his habit of groping women.

McConnell and his fellow travelers, who all profess deep religious beliefs, can expect a final judgment after they shuffle off this mortal coil. With luck, voters will chuck them out of office even sooner (for Collins, perhaps on Tuesday).

But in 2020, the river of hypocrisy runs deep and wide.

For example, tens of millions of workers and employers affected by COVID-19 have received no federal pandemic assistance since July. Senate Republicans have been hand-wringing about the cost, allegedly concerned about padding an already enormous federal budget deficit.

The disastrous US response to managing the pandemic — much less efficiently than countries with far fewer resources — would be almost funny, except for the quarter-million Americans whom the virus has already killed.

Fair enough — except they had no such worries when Trump signed a package of tax cuts in December 2017. Just over two years later, the Congressional Budget Office predicted the federal deficit in 2020 would exceed $1 trillion, 28 percent higher because of the tax reductions. And that was before the pandemic’s arrival slammed the brakes on the economy.

Lower taxes on the rich? But of course. Help lower-income Americans struggling to feed their children or pay the rent? Send them to the back of the bus.

Or consider Trump’s plan in 2018 to vastly expand oil and gas drilling along the Atlantic coast — oh, except in Florida, where offshore exploration could annoy voters in an important battleground state. That finally was a bridge too far for elected officials in neighboring states, even Republicans, who demanded equal protection.

So the president announced in September that he would extend a moratorium on drilling in the eastern Gulf of Mexico, including Florida’s west coast, as well as expanding it to include the Atlantic coasts of Florida, Georgia, and South Carolina — states all led by Republican governors.

Said the president in Jupiter, FL, managing to keep a straight face: “This protects your beautiful Gulf and your beautiful ocean, and it will for a long time to come.”

Although Republicans lead the hypocrisy parade, they haven’t quite cornered the market. Let’s also give a shout-out to Bob Woodward, one of the original Watergate reporters, whose revelations have embarrassed many other politicians (and US generals, for that matter) since Richard Nixon walked the plank in 1974. Woodward portrays himself, mostly accurately, as a man devoted to honest, aggressive journalism.

Trump, in an unguarded moment, told Woodward back in February that he knew COVID-19 was “more deadly” than ordinary flu, and in a March conversation added that he had deliberately downplayed the coronavirus threat so he wouldn’t “create a panic.” Woodward could have shared that information about the looming threat — and the president’s no-tell crisis management strategy — with the American public. But instead, he withheld those juicy tidbits until September, when it was time to publicize his new book. (Its title has been omitted here to avoid rewarding the guilty.)

The Lack of Accountability in US Politics Is Beyond Shameful

The disastrous US response to managing the pandemic — much less efficiently than countries with far fewer resources — would be almost funny, except for the quarter-million Americans whom the virus has already killed. On the campaign trail, an unmasked Trump keeps insisting that the US is “turning the corner” on COVID-19, except that the coronavirus doesn’t seem to be listening.

The number of newly diagnosed Americans set a record Friday with more than 98,000 cases – enough people to fill two good-sized stadiums. Every day, the virus kills about 800 people in the US, and will probably keep doing so throughout a long, bleak winter.

How many lives would have been spared with a simple executive order last March requiring everybody to wear a 50-cent cloth mask in public spaces — shopping malls, supermarkets, schools, and sports arenas? As pro sports teams have demonstrated, most recently with a successful World Series, masks and social distancing are almost 100 percent effective in preventing transmission of the virus.

All it requires is determination. All we got were complaints about government “overreach” from thuggish militia members driving jacked-up trucks to show off their assault rifles, bolstered by reckless reopenings from lickspittle governors. Their operating principle: All facts are fake if they don’t match the scenery in the rosy alternate universe where they reside.

It’s hard to imagine that anyone hasn’t yet made up their mind about who should take the presidential oath of office in January. And an astonishing 90 million voters have already cast their ballots. But anyone still undecided this Tuesday might ask themselves if America can survive four more years of chaos, confusion, needless deaths, and endless hypocrisy.

More than 1,600 US religious leaders — mainly Catholics, mainstream Protestants, and even some evangelicals — have publicly backed Biden. (For the record, 80 percent of white evangelicals backed Trump in 2016.)

Let’s hope this shift toward righteousness makes a difference when all the votes are counted, and that religious and spiritual leaders follow up with a rediscovered emphasis on the need for honesty and moral values — real, not hypocritical. If not, Jesus weeps.