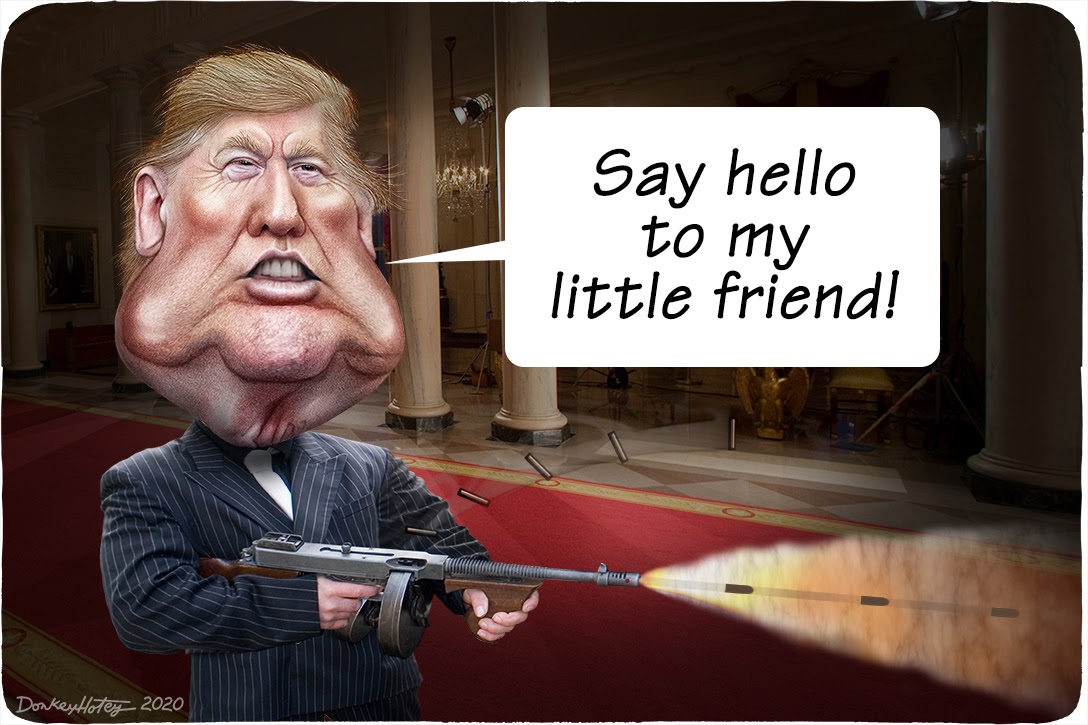 American Outlaw: Get Ready for Donald Trump at His Worst

There have been some lawless times in US history. The Wild West comes to mind, the Prohibition era, and, most recently, the first three years of the Trump presidency. All of them will seem like a church choir outing compared to what’s going to happen in 248 days — not necessarily because of the nature of the crimes but rather because they will be committed in plain sight at the highest level.

Win or lose, on the day after the election, the world is going to see the real Donald Trump. Not that we don’t have a good idea already who this president is, but he is going to take it all to another level — the corruption, the lying, the self-dealing. Right now, even though it often doesn’t seem that way, there is still some level of restraint. Trump knows that he cannot do all of the things he would like to do.

That would change once he wins the election. After getting carte blanche from the Senate and stacking the courts with judges who share his ideology, he will have survived the final obstacle to unchecked power — being held to account by the American voters.

Essentially, Trump will have four years during which he can do whatever he wants.

Some stuff is going to happen right away. If you are the warden of a prison holding one of Trump’s many allies, you better have the keys ready. Because every last one of them is going to walk.

Other pardons will more or less be sold in a way that will make Bill Clinton’s highly questionable pardon of Marc Rich look like a masterclass in political ethics. Trump’s second inauguration will be a textbook example of an autocrat funneling money into his own pockets. It’s going to be so bad it’ll make Vladimir Putin blush. And this time, there will be tanks in the parade.

After that, all bets are off. Maybe he’ll force Mike Pence to resign and appoint Ivanka vice president. Maybe he’ll move a federal agency to one of his struggling resorts and charge them $1,000 per room per day. Maybe he’ll stop funding all science. Maybe he’ll start a war or nuke a hurricane. It’s tough to predict what that addled brain of his will cook up.

There will definitely be a scouring of his “enemies.” And he’ll spend those four years trying to figure out how to stay in power longer.

If you are wondering: “Can he really do those things?” then you are asking the wrong question. The right one is: “Who’s going to stop him?” It won’t be Congress, it won’t be the sycophants he has surrounded himself with, and it probably won’t be the courts. And even if the courts were to rule against him, what if Trump simply doesn’t care? It’s not as though he has shown any respect for the judiciary.

We got a glimpse of this following Trump’s Senate acquittal when he interjected himself into Roger Stone’s case and criticized the sentence, the judge, and even a juror.

Let’s say a court decides that the administration cannot dismantle the Environmental Protection Agency and spend its budget on a gold-plated Air Force One. How is it going to enforce that ruling? Who is going to do it? Do you really trust that the system will work as intended? Because this president has shown over and over that it doesn’t.

Trump has spent his entire presidency undermining institutions and eroding Americans’ trust in them, so why stop now? If he is reelected, the US will be fundamentally changed in ways we cannot currently imagine.

If Trump loses, however, things will be even worse in the short run — especially if it is a narrow victory. There is no assurance at all that there will be peaceful and orderly transition of power. We have mapped out before how Trump will try to stay in office by disputing the outcome of the election. Too much is at stake for him, including whether he is going to be indicted as soon as he leaves office.

In addition to undermining the legitimacy of his opponent’s win, Trump is going to try most of the above. But instead of having four years to do it, he’ll have to cram all of it into 77 days. It’ll be corruption and abuse of power on steroids.

Those two-and-a-half months will be off-the-charts insane, and it’s anybody’s guess what will happen in addition to making Bush v. Gore look like a friendly neighborhood dispute.

Maybe Trump will sell overpriced condos in exchange for executive orders. Maybe he’ll conjure up some crisis that would require him to stay in office longer. Maybe Diamond & Silk will become secretary of defense. Maybe Trump will try to preemptively pardon himself for all crimes he has ever committed. Maybe he’ll give Alaska back to Russia.

All of the above assumes that there even is an election, which would be a 100 percent certainty in every other year. But in 2020, on Election Day, there is at least a chance that it won’t be business as usual. Who is to say, for example, that Trump won’t cancel the election because of coronavirus concerns? He’d be hailed as a champion of public health on Fox News. Or that he wouldn’t dispatch goon squads to polling places in heavily Democratic districts to “prevent voter fraud”?

It’s impossible to say what exactly will happen. The only thing we can predict with a high degree of certainty is that it’s going to be absolutely nuts — so buckle up for a really wild ride, America!