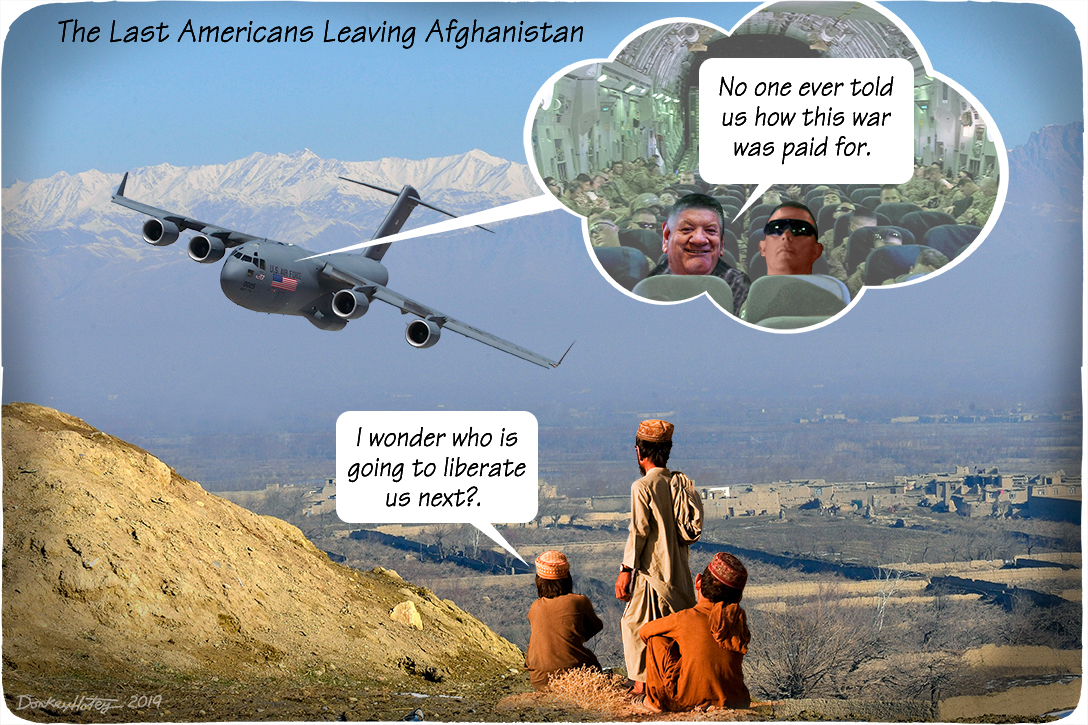 Afghanistan — the Gift That Keeps on Giving (to Defense Contractors)

This week, the Washington Post published a devastating account of the situation in Afghanistan. What the paper revealed should come as no surprise to WhoWhatWhy readers and anybody who has been paying attention.

In 18 years, the US has achieved virtually nothing. For this complete failure, it has paid a staggering price — not only in terms of taxpayer money but, most importantly, the loss of life of Afghans and coalition forces alike.

We thought we’d take this opportunity to look ahead and predict what it might sound like when the US finally withdraws from this ill-fated adventure.

US Declares Victory as Few Remaining Afghanis Are Deemed Pacified

KABUL, Dec. 15, 2051 – The shutters of dozens of cameras were drowned out by the engines of the massive transport plane roaring to life. Photographers from all over the world converged on Kabul International Airport to document this historic event.

When the Boeing C-17 lifted off it became official: For the first time in five decades there were no American soldiers on the ground in Afghanistan.

The flight was symbolic in more ways than one. It will be the last trip of a C-17. It is being replaced with the C-27, which was recently in the news because the price tag of the new transporters has ballooned to $2.5 billion apiece following significant cost overruns. That’s nearly 10 times as much as its predecessor. However, the Pentagon’s top brass insisted it was a necessary expenditure.

“Any time you can replace a perfectly good plane with a much more expensive version, you have to do it,” Defense Secretary Les Klute said. “It’s the right thing to do by our military contractors. Wait, did I say ‘military contractors?’ I meant ‘troops.’ Please change that to ‘troops’ or I’ll say it’s fake news.”

Klute added that, in light of the Defense Department’s $1.5 trillion budget, it’s really just a drop in the bucket.

“We gotta spend that money on something, right? Anyways, it’s important that we keep spending more on defense than the next half dozen countries combined,” Klute argued. “Otherwise, they could catch up to our capabilities in just a few short decades.”

The mood aboard the C-17 is somber. Not only is their mission over, but the troops now have a new set of challenges to face. Instead of navigating a battlefield, roadside bombs and harsh conditions, they return to a country that has changed over the years.

The flimsy safety net that was still available to Americans at the start of the century has been eroded further by cost-cutting measures.

Take Staff Sergeant Tom Wilkins, for example, who has spent 12 years in Afghanistan. He kept signing up for deployments because his family needed the extra combat pay while his wife worked three jobs. The reason: Their son has asthma, a highly treatable illness — at least, elsewhere in the world.

“With our insurance no longer covering it, we have to pay the $500 for each inhaler out of pocket, so I had to do what I had to do for my family,” he stated. “I get why we can’t have universal healthcare like all those other countries in the world. We just don’t have the money for it. Anyways, that would be socialism.”

The Congressional Budget Office has estimated that the Afghanistan war has cost $10 trillion so far. However, because it is running massive deficits as a result of corporate tax cuts, the US will keep paying interest on that money indefinitely to the tune of $200 billion annually.

Captain Emily Norton also signed up for multiple tours of duty to help her family.

“My daughter wanted to go to college, so my husband and I had a decision to make: We either could deny her that wish and watch her grow up, or I could go to Afghanistan for 10 years and get that combat pay,” she said. “So that’s what we did.”

Almost as an afterthought, Norton added: “It would be nice to have free college, but that would cost trillions, right? I wonder how they manage in other countries.”

When Norton was told that it would cost $50 billion annually to make college free for all Americans, which equals 20 of the planes she was flying on, she said: “Huh.”

Norton spent the rest of the flight playing with her phone’s calculator with a grim look on her face.

Elsewhere, the mood was much better.

“Mission accomplished,” an ecstatic President Samuel “Whitey” Oldman proclaimed from the White House lawn. “We went in there and did the job.”

Asked by a reporter what that job was, Oldman was evasive.

“Well, we got the guy and we did the stuff and the poppy seeds with the warlords. Anyways, patriotism and the flag, and God bless the United States,” the president said before refusing to take additional questions.

There were mixed emotions on the ground in Kabul.

“Good riddance,” said Hamid Efshani when he saw the plane disappear. Efshani is one of three million Afghanis left from the 35 million who lived in the country at the start of the century.

Asked how he had survived all these years of war while so many others had not, he offered a simple explanation.

“I don’t go to weddings, funerals or hospitals, so I never was in danger of becoming collateral damage of an ‘errant’ drone strike,” Efshani pointed out.

Not long after the C-17 had disappeared in the clouds, a second plane took off from Kabul, this one with less fanfare. It was the lavish private jet of Grant Rich, the CEO of the newly formed Lockheed Raytheon Grumman.

“I think that went well,” Rich said, taking a sip of champagne from a diamond-encrusted golden cup. Then he fired off a group email to the behemoth defense contractor’s 834 lobbyists in Washington and asked them to identify which country the US could liberate next.