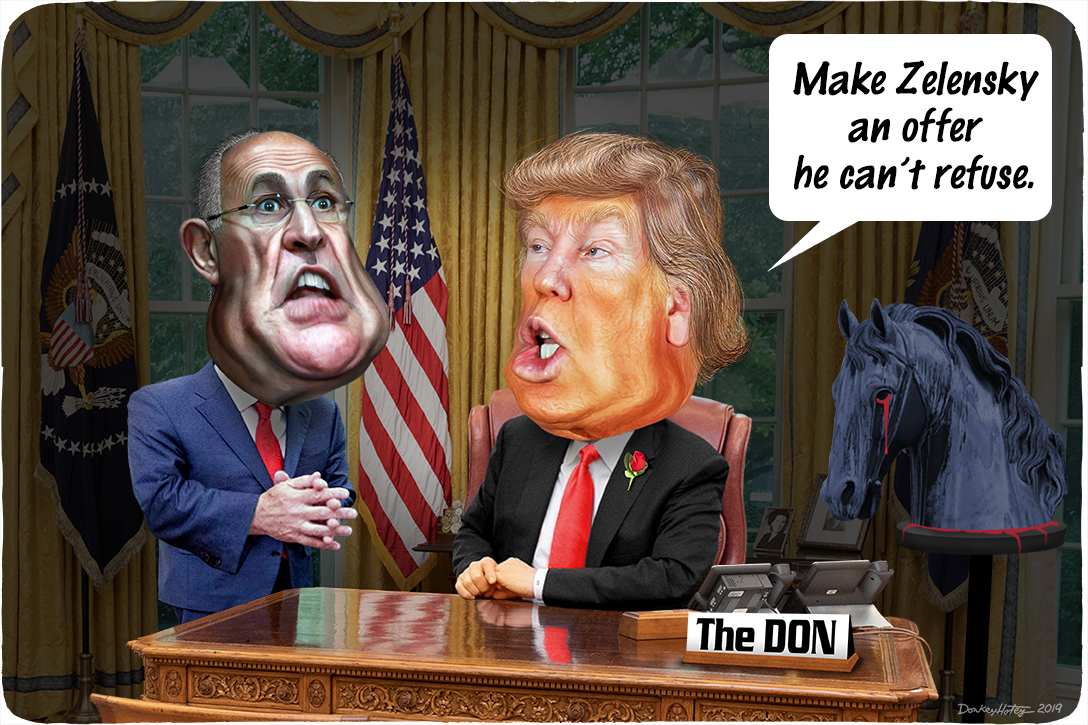 As the Ukraine scandal unfolds, President Donald Trump and former New York mayor Rudy Giuliani are frequently compared to a Mafia boss and his lawyer. We should be so lucky, because that would certainly mean the end of the mob.

It’s difficult to put into words how inept Giuliani is. But we’ll try… by making him a character in one of the most iconic mob movies in history: The Godfather.

It is the story of Don Corleone, a Mafia boss portrayed by Marlon Brando. Trump is often compared to this character while Giuliani is seen as playing the role of Corleone’s right-hand man (consigliere) Tom Hagen.

A key difference is that, while Hagen is extremely capable and effective, Giuliani clearly isn’t. So we thought it would be fun to imagine a mafia film modeled after scenes from the Godfather trilogy.

Our version stars Don Trump and his trusty sidekick Consigliere Giuliani as they hatch a foolproof plan to get prosecutors in the Ukraine to dig up dirt on their hated enemy, Sleepy Joe. We call it “The Ukraine Scandal — a Tragedy (for Democracy) in Three Acts.”

Don Trump is perched behind his desk, looking at a recent poll in which he is trailing all Democrats in a potential 2020 matchup. Consigliere Giuliani is standing next to him, looking concerned.

This poll is very disrespectful. It is fake. We are doing much better in internal polls that show I’m a huge success.

(eager to please the Don)

Yes. This poll is likely the work of Soros, as all bad things are. But we should do something about these Democrats. For example, Sleepy Joe.

What do you suggest?

In 2016, we were very successful in asking a foreign power for help. Why not do that again?

Great idea, especially because crazy Bob Mueller just said yesterday there was NO COLLUSION, NO OBSTRUCTION (starts tweeting about it). I am going to call the Ukraine and make them an offer they can’t refuse. Military aid for dirt on Sleepy Joe.

Brilliant! Should we be worried that this is a serious violation of campaign finance laws?

NO COLLUSION, NO OBSTRUCTION.

Don Trump grabs the phone and is connected to Volodymyr Zelensky.

I have always been very good to you but I can’t remember you ever doing anything for me.

Well, I stayed at Trump Tower the last time I was in America…

Be that as it may. I need you to do me a favor if you want our further assistance. I demand that you investigate a story I read about on 8chan. You will work together with the great Consigliere Giuliani.

I would be honored, Don. You are the greatest, a great teacher for us all, and I can’t wait to kiss your ring when I am in your country next time. And of course I will stay in your great hotel.

The brilliant plot hatched by Don Trump and Consigliere Giuliani seems to fall apart. A whistleblower has ratted them out to the Feds, and the Don and his right-hand man are feeling the heat.

Let’s hope the fake news never gets a hold of this transcript — even though it was a perfect phone call. What should we do now?

Well, my strategy is to go on every cable TV station, make a bunch of conflicting statements and blame the entire thing on Hillary. And then yell at people. As for you, Don, why don’t you do what you always do: Go on TV, admit what you did and explain that there is nothing wrong with it. And complain about the media a lot.

Amazing plan. Let’s do it. And we can always count on Fox News to help us and explain that what we did was perfectly OK, so at least my base won’t question what we did. Let’s book some time with Hannity.

After both Don Trump and Consigliere Giuliani go on TV admitting to their Ukraine scheme and the Don inexplicably release a transcript of the fateful phone call, the Feds are preparing an indictment.

How did things ever get so far?

We are not that clever.

I wish I knew who snitched to the whistleblower and that we could do what we did in the old days — give them cement shoes and throw them into the Hudson.