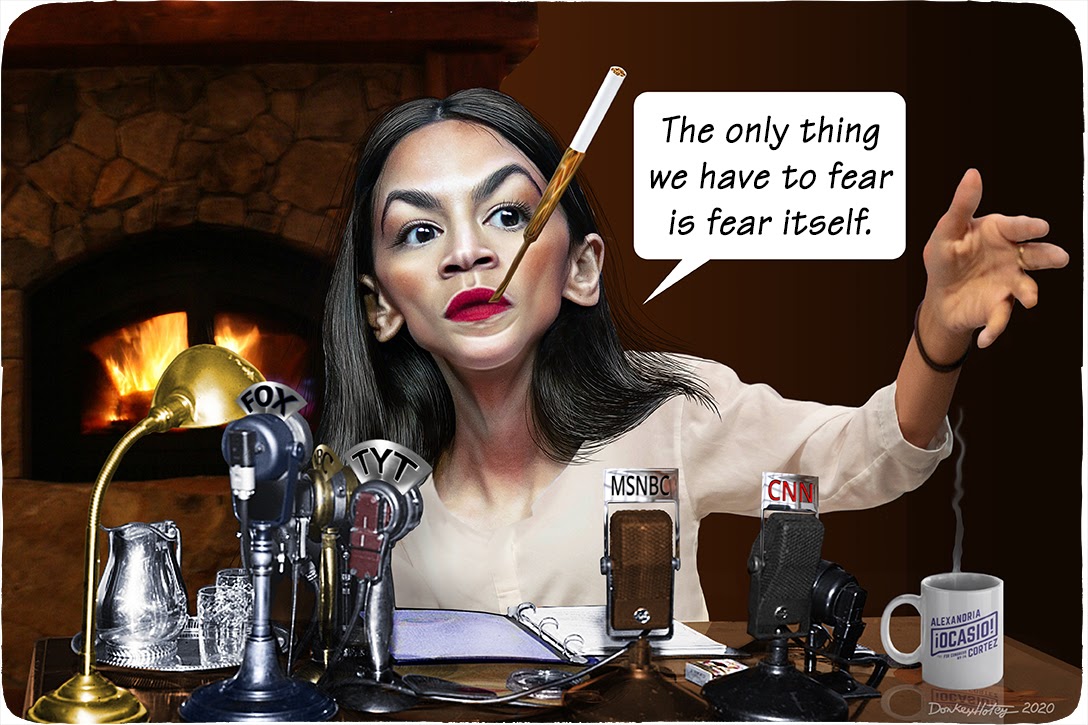 The big winner of tomorrow’s Iowa caucuses isn’t running for president. At least not yet. In fact, that wouldn’t even be allowed … after all, Rep. Alexandria Ocasio-Cortez (D-NY) won’t be old enough to seek the presidency until 2024.

That’s convenient, because, unless President Donald Trump wins reelection and completely dismantles the Constitution, there will be a presidential election that year.

But let’s not get ahead of ourselves. Unless a moderate Democrat loses to Trump this year, 2024 may be too soon for her. That would be the only scenario in which there would be an opening and an opportunity for her, i.e., no Democratic incumbent and a party base fed up with picking “safe” candidates only to watch them go down against the least qualified president in history.

The 2020 cycle has been great for Ocasio-Cortez so far. Since her meteoric rise to political stardom in 2018, she has backed up the hype with solid work in Congress. She has also avoided any major missteps. That’s quite a feat, because she is watched more closely than any other new member of Congress. The right-wing media is following her every move, ready to pounce on any mistake she makes – real, perceived, or manufactured.

Fox News, for example, is obsessed with her. A study from last year shows that Fox News and Fox Business mentioned her every day for six weeks in early 2019 — 3,182 times in total. That’s an average of 75 times per day. Trump also frequently mentions her in tweets.

Their vilification of Ocasio-Cortez, commonly also known as AOC, makes sense. Republicans and their allies must be scared to death of her. They are certainly no idiots and must realize that Ocasio-Cortez is a political threat to them and all they hold dear.

In fact, if you wanted to engineer a Democrat to win the presidency in the late 2020s and early 2030s, she would look a lot like AOC.

Perhaps most importantly, she speaks to young people. An entire generation of voters will grow up knowing her name as a leading progressive voice; and if neither Sen. Bernie Sanders (I-VT) nor Elizabeth Warren (D-MA) wins the Democratic nomination, then AOC will be the progressive voice going forward.

While your average Fox News viewer and many old people may be uncomfortable with her political positions, things like providing universal healthcare, protecting the environment, and making college affordable for all are very popular with the younger generation.

And those old voters will die out while a wave of young people who grow up familiar with AOC will become eligible to vote. By 2028, more than 20 million Americans born before 1964 will have died. At the same time, almost twice as many kids who are now between the ages of 10 and 18 will become eligible to vote. On average, they will be way more progressive than any other voters.

It will also help AOC that she is on the right side of history with her signature political issue, the Green New Deal. Much like Barack Obama in 2008, who made a major campaign issue out of his opposition to the highly unpopular Iraq War from the start, Ocasio-Cortez can say that she has fought climate change throughout her entire career. That is going to be a major advantage over others in a few short years when the devastating effects of climate change will be more and more difficult to ignore.

Ocasio-Cortez is not only on the same page as young people on the issues, she also knows how to communicate with them. She has a strong social media presence, is relatable, and represents a breath of fresh air in the stuffy world of politics.

While it may still be tougher for women to get elected, at some point in the near future, it’s very possible that the pendulum will swing the other way. First of all, women vote in greater numbers than men, and an increasingly smaller percentage of Americans is growing up with an antiquated view of gender roles.

Having a Latina at the top of the ticket may also get more Hispanics, the fastest growing demographic in the US, to show up and vote.

And, while it shouldn’t matter, AOC’s attractiveness will be an asset as well. Research has shown that individuals considered to be good-looking are viewed as more knowledgeable and persuasive.

In addition to these attributes, it is already very obvious that Ocasio-Cortez is going to be a fundraising juggernaut. In the third quarter of 2019, she raised more money than any other House Democrat. The vast majority of it came from small donations and she did it without “dialing for dollars.” For a first-year congresspeson, that is unheard of.

Her fame and grassroots fundraising prowess also mean that she won’t be beholden to any special interests or even her own party — and an independent streak is something American voters have often valued in political candidates.

Finally, and this is what makes her the winner of the Iowa caucus, she is effective on the campaign trail. While Sen. Bernie Sanders (I-VT), whom she endorsed, was in Washington, DC, for the impeachment trial, AOC became his most important surrogate in a state where he is now leading before tomorrow’s vote.

Speaking in front of packed houses, Ocasio-Cortez impressively showed that she can connect with voters not just in the Bronx but also in the Midwest. In addition, the experiences and connections she made while campaigning in the Hawkeye State will serve her well if she ever chooses to run for president.

And that’s a decision she has to make soon.

Every politician has a window of opportunity during which a presidential run makes the most sense. If, for example, a Democrat wins this time around and picks a young running mate who becomes the heir apparent in 2032, then there might be a 16-year block during which she could only run as a party crasher. And nobody likes those.

Conversely, as we noted above, there may be an opportunity as early as 2024.

Some might say it’s too soon to worry about that. But in AOC’s case, it’s not. Because if she has White House ambitions, she has to watch her step now. There are plenty of people on the right, even in her own party, who want to maintain the status quo at all costs and would be thrilled to catch her in an embarrassing mistake.

If she can avoid that, stay grounded, and keep working hard on the issues important to young Americans, Ocasio-Cortez will be a formidable candidate down the road.