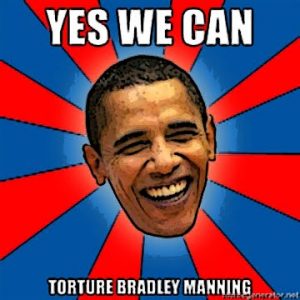 What’s Up With Obama, Torture, and Secrecy? Extraordinary rendition — the abduction of foreigners, often innocent ones, by American agents who sent them to countries well known for torturing prisoners — was central to President George W. Bush’s antiterrorism policy. His administration then used wildly broad claims of state secrets to thwart any accountability for this immoral practice.

President Obama has adopted the same legal tactic of using the secrecy privilege to kill lawsuits. So the only hope was that the courts would not permit these widely known abuses of power to go unchecked.

Last Monday, the Supreme Court abdicated that duty. It declined to review a case brought by five individuals who say — credibly — that they were kidnapped and tortured in overseas prisons. The question was whether people injured by illegal interrogation and detention should be allowed their day in court or summarily tossed out.

The court’s choice is a major stain on American justice. By slamming its door on these victims without explanation, it removed the essential judicial block against the executive branch’s use of claims of secrecy to cover up misconduct that shocks the conscience. It has further diminished any hope of obtaining a definitive ruling that the government’s conduct was illegal — a vital step for repairing damage and preventing future abuses.

The lead plaintiff, an Ethiopian citizen and resident of Britain named Binyam Mohamed, was arrested in Pakistan in 2002. The C.I.A. turned him over to Moroccan interrogators, who subjected him to brutal treatment that he says included cutting his penis with a scalpel and then pouring a hot, stinging liquid on the open wound.

After the trial court gave in to the secrecy argument, a three-judge panel of the Ninth Circuit Court of Appeals ruled that the case should proceed. It said the idea that the executive branch was entitled to have lawsuits shut down with a blanket claim of national security would “effectively cordon off all secret actions from judicial scrutiny, immunizing the C.I.A. and its partners from the demands and limits of the law.”

Last September, the full appeals court, ruling en banc, reversed that decision by a 6-to-5 vote. The dissenters noted that the basic facts of the plaintiffs’ renditions were already public knowledge. But the majority gave in to the pretzel logic shaped by the Bush administration that allowing the torture victims a chance to make their case in court using non-secret evidence would risk divulging state secrets.

The Supreme Court allowed that nonsense to stand.

It is difficult to believe there are legitimate secrets regarding the plaintiffs’ ill treatment at this late date. Last year, a British court released secret files containing the assessment of British intelligence that the detention of Mr. Mohamed violated legal prohibitions against torture and cruel and degrading treatment.

The Supreme Court should have grabbed the case and used it to rein in the distorted use of the state secrets privilege, a court-created doctrine meant to shield sensitive evidence in actions against the government, not to dismiss cases before evidence is produced.

But this is not the first time the Supreme Court has abdicated its responsibility to hear cases involving national security questions of this sort. A year ago, the Supreme Court refused to consider the claims of Maher Arar, an innocent Canadian whom the Bush administration sent to Syria to be tortured. In 2007, the court could not muster the four votes needed to grant review in the case of Khaled el-Masri, a German citizen subjected to torture in a secret overseas prison.

As President Obama’s first solicitor general, Justice Elena Kagan was in on the benighted decision to use overwrought secrecy claims to stop any hearing for torture victims. She properly recused herself from voting on the case. Surely among the eight remaining judges there was at least one sensitive to the gross violation of rights, and apparently law. We wish they would have at least offered a dissent or comment to let the world know that the court’s indifference was not unanimous.

Instead, what the world sees is rendition victims blocked from American courts while architects of their torment write books bragging about their role in this legal and moral travesty. Some torture victims bounced from American courts, including Mr. Mohamed and Mr. Arar, have received money from nations with comparatively minor involvement in their ordeals.

The Supreme Court’s action ends an important legal case, but not President Obama’s duty to acknowledge what occurred, and to come up with ways to compensate torture victims and advance accountability. It is hard, right now, to be optimistic.

So that’s the situation at present, as the American people begin sorting out Obama’s credibility, first-term legacy, whether he deserves re-election—and if so, backed by what degree of enthusiasm.

The real question, in my mind, is: what in the world is Obama thinking? Why take this approach so very opposite “change we can believe in?”

Since I doubt the White House will tell me, I turned to a fellow who follows these matters on a daily basis: Steven Aftergood,  who runs the Project on Government Secrecy, Federation of American Scientists. (You can learn more on secrecy policy here.)

I asked him how he explains Obama’s attitude toward torture and accountability.

Here’s what he wrote me back:

I don’t have any particular insight into the Admin’s thinking.  All that I can infer is the official policy is intended to maximize executive power and freedom of action, not to advance any coherent political or moral set of principles.  Regrettably, the Supreme Court gave its blessing.

Keep in mind that Aftergood is no wild-eyed radical. He’s a careful and precise man, and he thinks before he speaks (or writes.) So, what we have here is this:

The Obama administration’s “official policy” seems to be to “maximize executive power and freedom of action, not to advance any coherent political or moral set of principles.”

This is disturbing on its face. But consider this in light of the choices it’s made, with regard to:

-continuing a virtually indistinguishable policy with regard to wars in Afghanistan and Iraq—then adding a war in Libya.

-refusing to question the treatment of military whistleblower Bradley Manning

-failing to have a candid discussion with the American people about the stranglehold that the military-industrial-espionage-oil complex has over the American presidency itself.

For more background on all of this, please see previous WhoWhatWhy pieces, such as

–The oil industry’s grip on the US government

–Why we are in Libya

–Lack of accountability for killing civilians in Afghanistan and Pakistan

and more on that

–The CIA’s man in Libya

–Evidence of oil industry pressure regarding the Iraq invasion

-And, finally, and perhaps most important, “What Obama is Up Against”:

Then come back here and share your comments. Tell us: what’s up with Obama?