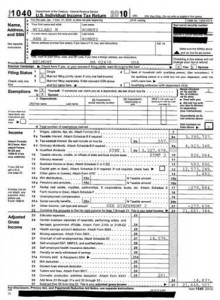 Everybody’s talking about Mitt’s taxes, but questions always remain. Here are a few:

Can we expect to find anything crooked in Romney’s filings?

You kidding? Smart rich people hire smart accountants to keep them out of trouble. It’s not the illegal things they do, it’s how they manage to rig things so that they get away, metaphorically, with murder.

Should Romney’s tax returns be the way to judge him?

To be sure, they do reveal how capital gains tax rates are highly advantageous to the rich and penalize those who work for their living. And that’s an important point. But what we should be interested in with regard to Romney in particular is his values, as shown by the strategies and tactics of his companies.

Are Romney’s recent tax filings the most important ones?

Because Romney left Bain Capital way back in 1999 to embark on a political career, it is the earlier tax filings that would likely reveal the most.

His seasoned political advisers would have been all over him to exhibit exemplary behavior–since ’99, and probably even earlier, when he may already have been considering politics. Also, as he was not actually working at Bain but just receiving passive income from it in recent years, we shouldn’t expect to see much that is worth assessing.

Thus, his 2010-11 release is definitely not very forthcoming.

Was Romney’s delay tactic part of a “limited hangout”?

One of the oldest tricks in the book is to resist disclosure, let anticipation build a bit, then release something that appears to answer questions, while not revealing anything very interesting. This pretty much ends debate.

Consider how long George W. Bush took to release National Guard service records, and how long Barack Obama took to release his birth records. In the end, these controversies fizzled, and people moved on.

Should Romney’s income from Bain even be treated as a capital gain?

No. He actually worked for that money, as a fund manager, plenty of hours every week. Thus, it should be taxed as normal earned income. But because of a loophole in the law (what a surprise!) engineered by the faithful lawyers, accountants and lobbyists of the one percent, it gets treated as capital gains, and therefore the lowest tax rate applies.

What’s with Romney’s having had money in the Swiss Bank UBS?

This looks pretty bad. (For more on UBS, its pernicious activities and how it gets its claws into politicians of both parties, see this, this and this.) There are very few legitimate, or public-spirited business reasons for having a Swiss bank account.

So why did Romney have that account? Someone should ask him. His trustee said he closed it in early 2010. That’s just a short time after UBS was forced to pay huge fines to the US government to settle a criminal investigation that established the bank had encouraged wealthy Americans to illegally hide their income abroad.

Could Romney have been one of those Americans? Possible, but doubtful, mostly because it would have been really dumb. Most of those caught doing that were largely in the “rich but dumb” category.

Could any of the tax shelter stuff turn out to be odious even if not illegal?

Sure, but you probably wouldn’t know unless you looked at, and compared, a whole bunch of different years’ tax filings. And so far, Romney has not agreed to provide that.

Can we trust Fred Goldberg’s clean bill of health?

When Romney released his tax filings, they came with a letter from former IRS commissioner Fred Goldberg saying he’d checked them out, and they looked…supah!

But who is Fred Goldberg? The same guy who, following an unscheduled visit from Scientology’s top leader, abruptly reversed policy to grant tax exempt status to the hyper-controversial, pyramid-style, service-selling enterprise. Worth taking a second look at this guy and why and how he is helping Mitt out.

Does the way Mitt released his taxes demonstrate good faith?

Definitely not. Though this was by far the biggest news out of his campaign on Tuesday, it was released the same day as the State of the Union address, guaranteeing that it would get second billing. Also, the campaign managed to bury it on their website, so much so that after a few minutes, I had still not found it there, and had to rely on the website of the Washington Post.

What about those domestic workers Mrs. Romney paid?

The filing, by Mrs. Romney (not Mr.). show that she paid around $20,000 in total during 2010 to four domestic workers. Sure would like to know more about that—and what it tells us about the rich vs. poor. The Romneys have at least three houses, some pretty substantial places. Assuming they only employ regular help at their main Massachusetts house, $20k is still a paltry total. That’s an average of $5,000 a year to four people. Wonder how much work they did. After all, Mrs. Romney is known to struggle with MS, and it’s doubtful Mitt does much sweeping, dusting, cooking, etc.

The Romneys should be queried about why Mrs. Romney takes legal responsibility for reporting payments to the help (beyond unfortunate stereotypes about stay-at-home wives), and why no payments show up for 2011.

In any case, it’s not a very good ratio of income to job creation, for a guy who talks about creating jobs: the year the Romneys paid their staff $20,000, they earned $27 million.

The worst thing of all is that, depending on their total income, those domestic workers may have paid a much higher tax rate for their hard physical labor at Romney’s house than Romney did on the millions in investment income that piled in while he pursued his political dream.

And that just seems really wrong.