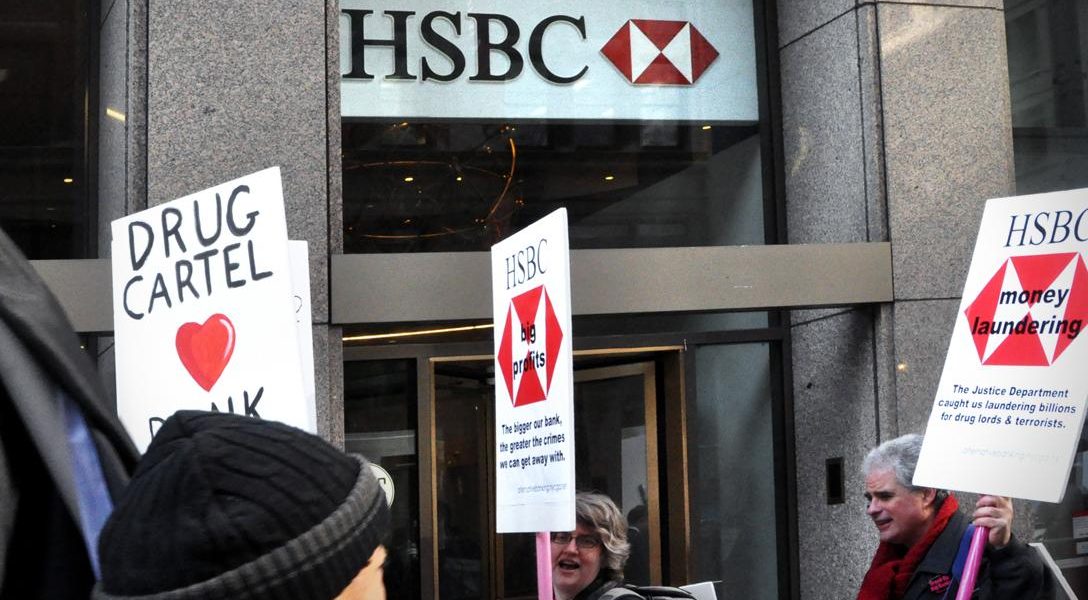 Banks and drug cartels have some things in common. They are both very lucrative businesses and not particularly popular with the general public. And, of course, they use copious amounts of each other’s products – at least if anecdotal evidence of the behavior on Wall Street can be believed.

While bankers can probably get their highs any number of ways, the Mexican drug cartels need financial institutions to clean their dirty money. And, it seems, there is no better bank for that than London-based HSBC, which is one of the world’s largest. In the first six months of last year, it reported a pre-tax profit of $13.6 billion.

According to a lawsuit filed against HSBC earlier this month, it earned some of those profits by allowing the drug cartels to cycle billions of dollars through it.

“From 2004 through at least 2008, HSBC Mexico accepted over $16.1 billion in cash deposits from customers throughout Mexico. This amount eclipsed the amount of USD cash deposits at financial institutions with market shares multiple times greater than HSBC Mexico’s,” the lawsuit alleges.

“The Place to Launder Money”

Why was HSBC so popular? For one thing, its Mexican operation had particularly lax anti-money-laundering policies. Or, as the lawsuit puts it, “a culture of recklessness and corruption pervaded HSBC.”

Cashiers would routinely accept large cash deposits, sometimes more than $1 million, from people with no identifiable source of income. This money was often packaged in boxes designed to fit through the HSBC teller windows.

But the problems went beyond employees not asking questions. Some of them were much more complicit, for example, by fabricating documents, by not reporting suspected illegal activity or by refusing to close suspect accounts. Some employees went even further and accepted bribes for helping the cartels launder money directly. The lawsuit states,

“Despite repeated warnings from authorities that drug proceeds were being laundered through HSBC-Mexico in USD accounts and that HSBC was, according to one drug lord, ‘the place to launder money,’ HSBC Mexico continued to accept billions of USD deposits each year, which it then exported to HSBC US.”

HSBC is no stranger to accusations of helping the cartels. In 2012, the bank paid $1.9 billion as part of an agreement with the United States and admitted that it had failed to establish an effective anti-money laundering (AML) program. In spite of having to pay such a massive penalty, no HSBC employees went to jail.

After paying that fine, HSBC hired current FBI Director James Comey to help get its house in order.

Even though the new lawsuit addresses an old problem, the legal action is unique for several reasons.

It was brought on behalf of the families of several Americans killed by the Mexican cartels. The action seeks redress under a 1996 law (amended following the 9/11 attacks) that allows victims of terrorism to seek compensation from any organization that supported the perpetrators of such crimes.

This is the first attempt to apply the 1996 anti-terrorism law to the actions of the Mexican drug cartels.

“The gruesome attacks on the innocent American victims on foreign soil were unquestionably acts of international terrorism,” said attorney Richard M. Elias, who represents the families.

The lawsuit asserts that cartels now function as “paramilitary organizations” and have become one of the top threats to US national security. Furthermore,

“Beheadings, torture, public hangings of mutilated corpses, military-style assaults, grenade attacks, car bombings, and kidnappings are daily occurrences in many Mexican cities, and the cartels ensure that these acts are publicly displayed as a mechanism to intimidate and control the civilian population and the government.”

The suit alleges that HSBC’s actions, or inactions, amounted to knowingly providing

Among the victims whose families are represented by Elias is Jaime Zapata, who worked as an agent for Immigrations and Customs Enforcement. He was killed on February 15, 2011, by a semi-automatic weapon associated with “Operation Fast and Furious” – the Bureau of Alcohol, Tobacco Firearms and Explosives’ (ATF) controversial gunwalking program.

HSBC is also funding terrorism and the drug cartel. It’s not the only bank. It’s all to continue the war on drugs and terrorism so the 1 percent can gain more $$$$$