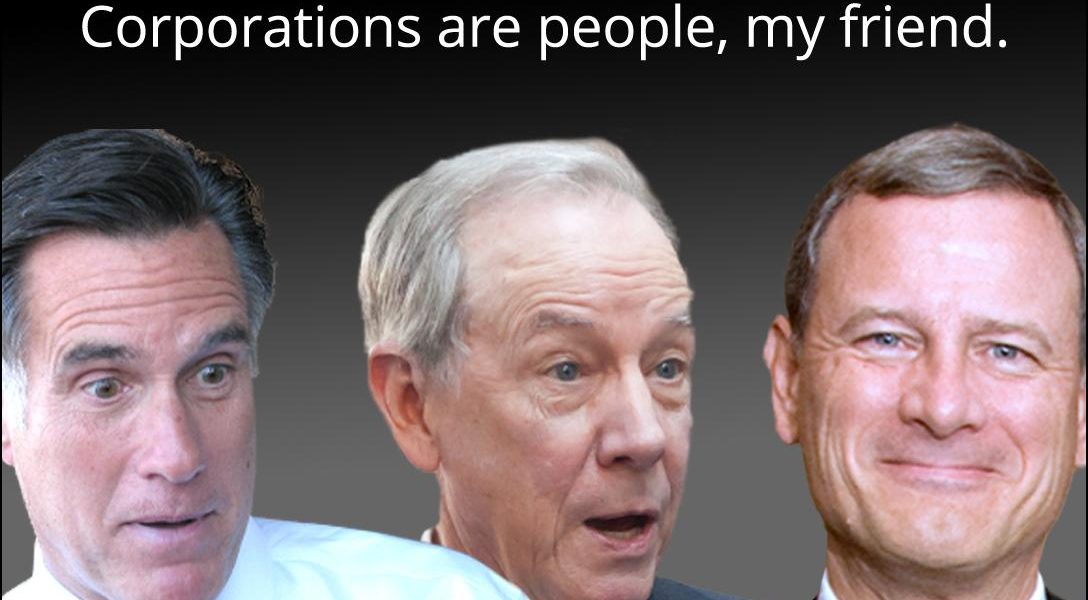 When Mitt Romney declared that “corporations are people” at the Iowa State Fair four years ago, there were quite a few chuckles in the crowd. However, as a new court decision has shown, it is no laughing matter that federal courts are increasingly holding the same view.

The latest win for Big Business came in a case against the Securities and Exchange Commission (SEC). The SEC had mandated that companies disclose whether their products were free of “conflict minerals.”

Because the trade in these minerals helps fund the bloody conflict in the Democratic Republic of Congo (DRC), and as a result contributes to the massive humanitarian crisis there, the purpose of the rule was to cut off that avenue of funding. But the United States Court of Appeals for the District of Columbia Circuit ruled in favor of the National Association of Manufacturers in the case and reaffirmed its view that a business could not be compelled to “confess blood on its hands” because doing so would violate its freedom of speech.

“The Supreme Court has been expanding the concept of corporate constitutional rights for decades, culminating in the disastrous 2010 Citizens United decision,” said Ron Fein, the Legal Director of Free Speech for People, who filed an amicus brief in the case.

Fein noted that the SEC rule merely required a company to disclose whether it could certify that its products did not include conflict minerals and that it gave businesses a lot of leeway in how to include this information.

But even that was not good enough for the court, which ruled that it was unclear what benefit the rule would have and that this type of information fell under the companies’ First Amendment protection.

There are, of course, plenty of instances in which actual persons have to disclose information that is not beneficial to them. For example, sex offenders have to register and in many situations in everyday life, felons have to reveal that they went to prison.

Judge Sri Srinivasan noted in the dissenting opinion that companies “must make all sorts of disclosures about their products for the benefit of the investing public.”

“No one thinks that garden-variety disclosure obligations of that ilk raise a significant First Amendment problem,” he added.

Therefore, Srinivasan argued, there should be no objection to requiring companies to disclose whether a product contained conflict minerals, proceeds of which help fund the conflict in and near the DRC.

“Such a requirement provides investors and consumers with useful information about the geographic origins of a product’s source materials,” Srinivasan wrote.

“If the courts strike down disclosure laws as violating freedom of speech, there could be an unintended consequence for these businesses that governments use more heavy-handed approaches to regulation, which would be ironic,” Fein said.

For now, however, only Big Business is laughing. The decision could also conceivably result in issues being reopened in the future that are now considered to be settled. Tobacco companies, for example, which have already successfully fought having to include graphic images on cigarette packs, could use the ruling to argue that they no longer should be required to print any kind of health warning on their products.

With a spate of recent decisions expanding the notion of “corporate personhood” – like this one or those in the Citizens United and Hobby Lobby cases – it remains to be seen if the judiciary is going to play other jokes on real persons.

(Comment by reader @ETakeBack) This is a big loss in the battle of “Right-to-Know” vs Free-Speech-for-Corporations.

When the TPP and the other pending odious “trade agreements” go into effect, thanks to Mr. Hope-and-change, this will all be moot. Corporations will have, at long last, taken over the world, and no decisions can be rendered by any court or any state or city here, or in the rest of the world, that interferes with their god-given right to profit, profit, profit. Just take your stupid Constitution and lame Bill of Rights and flush them down the crapper – careful, tho, the old crapper might get clogged up with all the other regulations, laws and stuff that will be swirling around in there.

‏(Comment by reader @FSFP) Big business continues to thrive at the expense of voters + democracy.

It’s real simple. If you like the idea of ‘Corporations’ controlling you lives just sit back and do nothing. If YOU want to take back control of YOUR Government, send a letter to you State Congress person and Senator TELLING them to get rid of the ‘Citizen United’ or your going to get rid of them through your vote. Come on people, GROW A PAIR!

And in how many cases do congressmen listen to actual human constituents these days? Some do, it’s true, but for the most part – money talks. And corporations are the ones with the money. That said, yes I do write to my congressmen and, since I live in New Mexico, for the most part Udall and Heinrich and Lujan do listen – or at least they are actual democrats and not DINOs. When I lived in Arizona, I had to hold my nose and write to Kyl and McCain, who would never in a million years do something to benefit real people.