Profiting From Police Reform: Can the Feds Break up Axon’s Body Camera Monopoly?

Along with a badge and a gun, more and more American police are issued body cameras as standard equipment.

Cameras have emerged as a solution to meet demands for better policing since a series of high-profile killings of unarmed Black civilians beginning in 2014 triggered a re-evaluation of law enforcement tactics and transparency.

While cameras haven’t necessarily improved policing or changed the public’s image of police, body cameras are increasingly the norm in law enforcement departments. Seven states mandate body cameras for all law enforcement officers, and of the 75 largest police departments in the country, only one — Portland, Oregon — has yet to use body cameras, though that may soon change as the city tries to comply with a US Justice Department settlement agreement.

The near-universal adoption of cameras has created a business opportunity for companies willing to supply them. But the body camera market is dominated by one company, Axon Enterprise Inc., whose command of the market will mean higher prices and diminished services for police, according to federal antitrust regulators, who are trying to break the firm’s near-monopoly.

Axon has cornered the camera market in two ways: by selling a digital ecosystem that provides police departments with camera hardware and evidence management software where police store and analyze video footage, and by swallowing up its competitors.

Axon attributes its success in part to the customer relationship the company enjoys with 94 percent of American law enforcement agencies — to whom Axon, formerly known as Taser International, sold tasers for over two decades. But in 2018, Axon consolidated the market by acquiring its largest competitor, Vievu LLC, for the relatively low price of $7 million in cash and stock. By acquiring Vievu, Axon became the main body camera supplier for a raft of new customers, including police departments in major cities like Miami, New York City, and Phoenix. 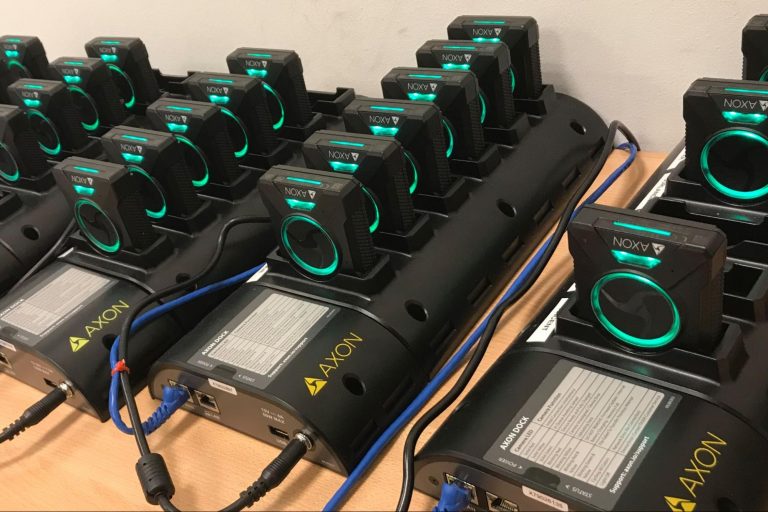 Since then, the company’s profits have soared. Axon’s revenue jumped nearly threefold, from $268 million in 2016 to $681 million last year. Year-over-year profits increased 28 percent from 2019 to 2020. Now, Axon controls roughly 70 percent of the market for body-worn cameras, according to Scott Berg, an analyst for investment banking firm Needham & Company.

The merger drew scrutiny from the Federal Trade Commission (FTC). In an administrative complaint filed in 2020, the FTC alleged the Vievu deal constitutes anti-competitive behavior, and that Axon has substantially increased prices since the merger.

“Competition for the sale of body-worn camera systems since the acquisition has suffered, which means police departments will pay more for body-worn cameras and get less in return,” the complaint alleges.

If the FTC is successful, Axon could be forced to undo its merger with Vievu and force the company to  create “a distinct, separate, and viable business” — essentially a divestiture company equipped with Axon’s own technology. Axon would also be forced to give up assets gained through the merger.

The case has parallels with the breakup of the telephone service provider AT&T in 1984, when the government ordered the monopoly break up into seven separate companies that continued to provide local telephone service.

When asked for comment about the FTC case, an Axon spokesperson said that “the market for body-worn cameras and digital evidence management solutions is more competitive than ever.”

“Axon is like Apple or Amazon,” said Christopher Schneider, a professor of sociology at Brandon University, whose research focuses on technology and policing.

By selling both body cameras with the cloud-based storage and management software necessary to use the footage, Schneider added, “they’ve torn a page from the tech industry,” meaning that once a police department signs on with Axon’s “ecosystem”, it’s difficult to leave.

In 2020, the city of Everett, WA, signed a five-year contract for more than $1.4 million dollars for body camera hardware and software with Axon precisely for that reason: Axon’s product came as an integrated bundle. The city evaluated one other camera maker, COBAN Technologies, but went with Axon because it offered superior features for managing the “digital evidence life cycle.”

A breakdown of the contract illustrates that, for Axon, the big money is in leasing its cloud software, called Evidence.com, not in physical body cameras. The contract details that the city only paid a little over $80,000 in initial body camera hardware, while $779,640 is tallied for access to Evidence.com over a five-year period.

Theresa Bauccio-Teschlog, a purchasing manager for the city of Everett, said the city was aware of Axon’s dominance in the body camera market but still went with Axon after a “comprehensive” bid process.

“I’m aware [Axon] is a large player in the market and I’m aware of the media attention regarding them,” she said. “However, the process that we followed would not have been any different had there not been media attention.”

Axon appealed to have the case moved from the FTC’s internal process to federal court. In early 2021, Axon lost its appeal and the 9th US Circuit Court of Appeals ruled the FTC was within its rights to contest the merger. The FTC case is currently stayed while Axon appeals to the Supreme Court to overturn the 9th Circuit Court’s ruling.

Experts say they believe Axon will survive this effort by the federal government to curb market concentration.Thomas Joo, a professor at the University of California, Davis School of Law and an antitrust expert, said Axon may defeat the FTC’s complaint, but not because Axon doesn’t have a near-monopoly. Instead, the complaint may fail on constitutional grounds.

Joo pointed to recent Supreme Court cases like Lucia v. SEC from 2018, when the court ruled the Security and Exchange Commission did not have the power to internally determine a case.

“With respect to SCOTUS, underneath it all is an antitrust case,” he said. “We see this political movement in favor of antitrust … [and] there is bipartisan talk about breaking up big tech companies.”

“But the immediate issue is [contesting the power of] the administrative state, which has been a winner of an argument lately.” 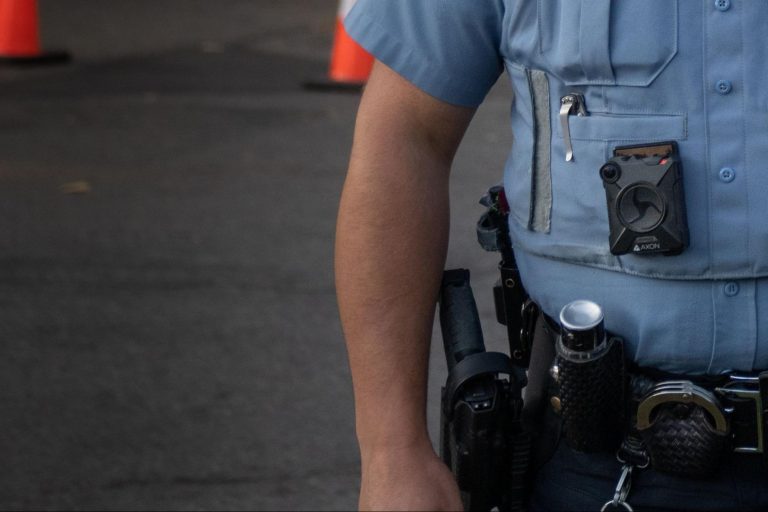 The antitrust challenge has not stopped Axon from inking new deals. Since the FTC filed its complaint, Axon has won lucrative contracts with the federal government, including with US Customs & Border Protection for $13 million and with the Drug Enforcement Administration for $223 million.

Besides smaller contracts all across the country with cities such as Everett, WA, Axon has entered new contracts or renewed contracts with large metropolitan areas like Los Angeles, Baltimore, and Toronto since January 2020.

Even if the FTC can successfully undo the Vievu-Axon merger, it won’t necessarily be a death knell of Axon’s body camera business, according to Scott Berg at Needham & Company. Most of the original Vievu customers are with Axon now, and the clone company that the FTC is arguing for could not compete in the market long term, he said. Axon’s Evidence.com is also an incentive for law enforcement agencies that are now with Axon to stick with Axon.

Even if Axon were split up, “it would be less than devastating, and I think they would ultimately win those customers back,” Berg said.

Axon’s near-monopoly has implications beyond the antitrust case, especially from a transparency and accountability perspective.

In a forthcoming paper, Joo and Elizabeth Joh, a fellow professor at the University of California, Davis School of Law, point out that police departments are not traditional consumers because they’re publicly funded. Taxpayers subsidize the adoption of body cameras and are impacted by their adoption of them, so there’s more to consider than the efficiencies and benefits for police departments that use Axon.

One concern is the “lock-in” effect. Because the majority of Axon’s products are sold as a subscription bundle — not individual pieces that can work with other products and systems — it can be costly for police departments to switch systems.

Before signing a body camera contract with Axon in 2014, Washington, DC’s Metropolitan Police Department (MPD) tested cameras from two other vendors: VieVu and Wolfcom, according to Alaina Gertz, a department spokeswoman.

Since then, the MPD’s contract with Axon has been extended on a sole-source basis at least six times, meaning no Axon competitors were formally considered.

Among the reasons for extending on a sole-source contract, the MPD cited Axon’s “all-in-one” service, adding that “the Department would incur significant cost to transfer and store this data with another provider.”

The MPD is currently in the final stages of negotiating a renewed body-worn camera contract. Gertz declined to provide details, including whether the MPD is entertaining bids from other vendors. According to the District’s Contracts and Procurement Transparency Portal, the MPD has purchased over $22 million in hardware and software from Axon since 2014.

Sole-source contracts are a major part of Axon’s business. A 2016 The Wall Street Journal investigation found that out of 23 major city contracts secured by Axon, 10 were secured in a no-bid process.

Austin Maye, who works in sales at Getac Video Solutions, a body camera maker that is a subsidiary of Getac Technology Corporation, told WhoWhatWhy that there can be accountability issues with relying on sole source.

The bidding process allows law enforcement and vendors to “stay honest with each other,” he said. “Having more vendors in the mix holds everyone to a higher standard.”

Government buyers skip competitive bidding if there’s only one vendor who can provide the goods or services in question. Axon argues that its “ecosystem” fits that criteria.

From Maye’s perspective, that’s not true. “To be forward, they’re not a unique product,” he said.

“The only thing they do that we don’t do is make an absolutely amazing taser.”