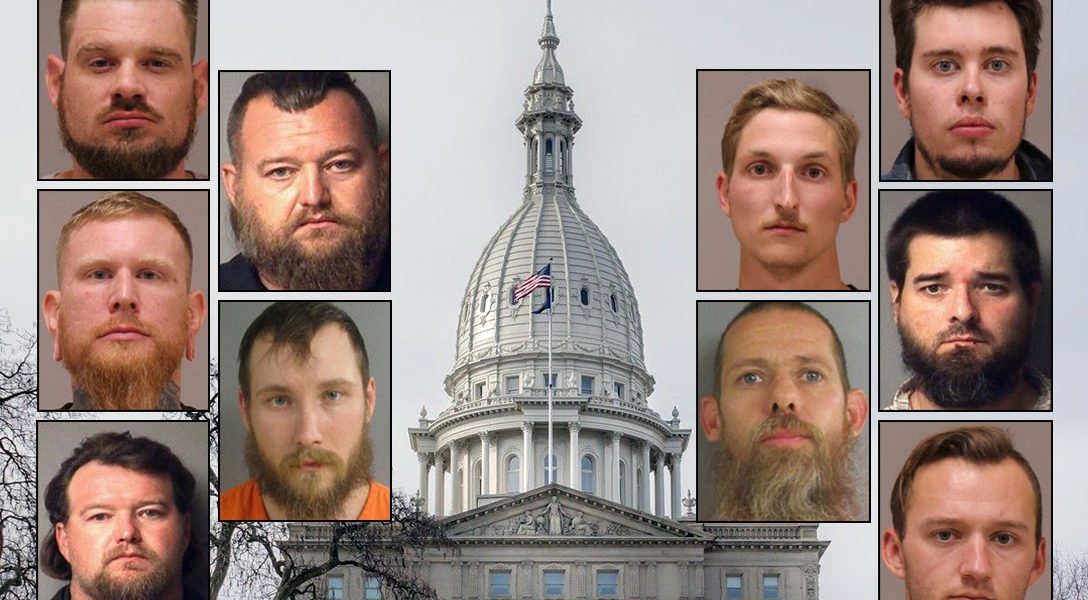 “Stand back — and stand by.” This was President Donald Trump’s response during the first presidential debate to a request that he condemn the Proud Boys, a right-wing white supremacist group. Arrests in Michigan Thursday by federal and state law enforcement officials made it clear that, in at least one state, so-called militiamen had been gearing up for action for months

Nearly six months after armed demonstrators stormed the Michigan state capitol in Lansing in protest of Democratic Michigan Gov. Gretchen Whitmer’s COVID-19 restrictions, FBI and Michigan authorities arrested 13 heavily armed, self-styled Michigan “militiamen” in plans to kidnap the Michigan governor, among other charges, putting a spotlight on the bubbling escalation of right-wing violence across the country.

Starting in early 2020, in response to social media posts discussing anti-government violence, the FBI began an undercover investigation that exposed a plot to kidnap Whitmer, according to a recently unsealed federal criminal complaint against six men.

The defendants are also alleged to have been collecting home addresses of police officers in order to target them, tested out explosives, and surveilled the governor’s summer home several times in the plan to kidnap her.

On Thursday, she said at a press conference in Lansing that the defendants had targeted law enforcement officers and made threats of violence “intended to instigate a civil war and engaged in planning and training for an operation to attack the capitol building of Michigan and to kidnap government officials, including the governor of Michigan.”

The federal and state charges are the latest developments in the proliferation of right-wing militia groups, both online and on the streets. Christopher Wray, the director of the FBI, told the House Homeland Security Committee in September that “racially motivated violent extremism” — mostly from white supremacists — makes up the majority of domestic terrorism threats.

Trump, however, has systematically downplayed the threat posed by these armed groups, which call themselves “militias.” After April demonstrations against public health regulations which Whitmer put in place to protect against the coronavirus, Trump aggravated the situation by tweeting in all caps: “LIBERATE MICHIGAN.”

Two of the men charged with plotting to kidnap the Michigan governor were allegedly among the armed protesters who crowded the state capitol in April, as shown in a photo posted at the time by state Sen. Dayna Polehanki (D).

After the federal and state charges were filed against the 13 men, Whitmer denounced Trump as one who has been “stoking mistrust, fomenting anger and giving comfort to those who spread hatred, fear and division.”

She said that Trump’s recent remarks during the first presidential debate were a “rallying cry, a call to action for white supremacists,” calling the president “complicit” in legitimizing “domestic terrorists.”

Even after the arrests, Donald Trump continued attacking Whitmer in a series of tweets for her response to the coronavirus.

“Rather than say thank you, she calls me a White Supremacist — while Biden and Democrats refuse to condemn Antifa, Anarchists, Looters and Mobs that burn down Democrat run cities,” one tweet said.

Despite their assertions that they are protecting the Constitution or private property, these militias have no legal standing, and many of the militias’ most visible activities are illegal under state and federal laws. One of the biggest challenges to public safety occurs when these groups attend racial justice protests, ostensibly to “protect private property.”

After the police shooting of Jacob Blake in Kenosha, WI, in August, militia members began arriving from all over Wisconsin and from other states, allegedly to protect private property. Kyle Rittenhouse, a 17-year-old self-styled militiaman from Illinois, armed with a semi-automatic, AR-15-style rifle, was among them. He was charged with shooting three people — two of them fatally.

A Threat to Democracy

The emergence of heavily armed militias has been exacerbated by Trump, who most notably refused to criticize white supremacist and neo-Nazi marchers in the “Unite the Right” march in Charlottesville, VA, three years ago, which led to the death of Heather Heyer. They carried tiki torches, Nazi regalia, and Confederate flags and chanted “White Lives Matter!” and “Jews will not replace us.” Trump famously said, “There are fine people on both sides,” referring to them and those who came out to counter-protest.

During the first presidential debate, Trump called for the Proud Boys to “stand back — and stand by.” Perhaps more ominously, he invited his supporters to show up to polling stations to “watch.”

“He [Trump] was, in essence, calling for a violent far-right organization to stand by and be prepared to engage in electoral interference, like voter intimidation or harassment, at his command,” said Devin Burghart, executive director of the Institute for Research & Education on Human Rights (IREHR), a Seattle-based center that studies far-right groups.

In September, early voters in Virginia were greeted at a polling station by a group of Trump supporters waving “Trump 2020” flags and chanting “Four more years!” as they blocked their path.

The Department of Homeland Security (DHS) predicts an escalation of violence around election-related activities. A threat assessment report released by the DHS in October warns that polling stations, voter registration events, and campaign events could be likely hotspots for violence.

The supporters who are the most alarming, however, are the ones who organize online to flaunt — and use — heavy weaponry.

“We are closely watching militia groups and are paying close attention to their potential mobilization around election day to engage in voter harassment and/or voter suppression in local communities,” said Burghart.

“Racism has moved from the margins to the mainstream in the last four years.”

But even more concerning, the research center found that Trump’s comments during the debate were interpreted by some extremist groups as a call to violence on Election Day. Some of these hate groups even want to turn November 3rd into the “Day of the Rope” — a genocidal fantasy to exterminate Jews, people of color, and so-called race traitors in one day.

Screenshots of conversations on the platform 4chan provided to WhoWhatWhy by the IREHR show chilling comments alluding to violence on Election Day. Hiding behind an anonymous profile, one user said, “I’m so ready to kill as many as possible before my inevitable death. Please god I want bombs and sh*t going off,” while another added: “Slaughtering leftists in droves will not be a punishable offense two months from now.”

Many of them have long been emboldened by Donald Trump to come out of the dark shadows of the internet. His law and order rhetoric, his skepticism over COVID-19, and his refusal to openly condemn white supremacy adds fuel to the fire.

“[It’s] a sign of how far racism has moved from the margins to the mainstream in the last four years,” said Burghart.

Led by Attorney General William Barr, the Department of Justice has echoed Trump’s continual attacks on the “anarchist” group ANTIFA, often falsely connecting it to the Democrats. Public interest organizations that study and track extremist groups have found that the biggest threat is, in fact, coming from neo-Nazis and right-wing extremists. Their observations are also consistent with a whistleblower complaint that accuses senior DHS officials of editing a Homeland Threat Assessment. Those officials have been minimizing the threat of white supremacy to make it appear “less severe,” while inflating the impact of violent left-wing groups “to ensure they matched up with the public comments by President Trump on the subject of ANTIFA and ‘anarchist’ groups,” the complaint says.

Finally, this month the DHS released a threat assessment report that asserts that “racially and ethnically motivated violent extremists — specifically white supremacist extremists (WSEs) — will remain the most persistent and lethal threat in the Homeland.”

Right-wing militias have deep-seated roots in American history, and their violent attacks reflect a high level of organization.

Most notably, Timothy McVeigh and Terry Nichols, who bombed the Murrah Federal Building in Oklahoma City in April 1995, were both part of a survivalist militia from Michigan.

Since then, “the Internet has made it easier for extremists to meet each other (and thus engage in plots), as well as to self-radicalize and become lone wolf offenders,” according to the Anti-Defamation League.

“The idea of having these bands of heavily armed, unaccountable groups of far-right activists marching through the streets and taking the law into their own hands is a very serious sign of a decline in our overall democratic principles,” Burghart said.