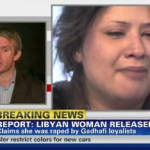 As reprehensible as Qaddafi’s regime is, it is important to be on our guard against psyops–disinformation efforts designed to sway public opinion.  The Pentagon and CIA, as well as agencies of many other countries, have extensive operations focused on this objective.

In this light, we might consider this story that Qaddafi militia members raped a woman:  [bold type added for emphasis]

In the latest turn in the case of Eman al-Obeidy, a Libyan woman apprehended by security forces for trying to tell journalists that she had been raped by members of Col. Muammar el-Qaddafi’s militia, a government spokesman said Tuesday that the unidentified militia members she accused had filed a civil case against her.

“Oh, yeah, they have filed a case,” the spokesman, Musa Ibrahim, said. “The boys who she accused of rape are bringing a case because it is a very grave offense to accuse someone of a sexual crime.”

Journalists have been unable to learn Ms. al-Obeidy’s whereabouts since she was removed by force from the Rixos Hotel here after scuffles between security personnel, hotel staff and foreign journalists she had been trying to approach on Saturday.

Mr. Ibrahim initially described her as drunk and potentially delusional. Then, later on Saturday, he called her sober and sane. And on Sunday he termed her a prostitute and a thief.

He said that her case against the men had been dropped because she refused to submit to a medical examination, and he reiterated a promise that she would be offered a chance to speak again to the press.

The story of her treatment, covered by satellite news channels and Web sites, has riveted Libyans of all stripes. To critics of the Qaddafi government Ms. Obeidy has become the new face of its brutal tactics. Her family and tribe, based in the rebel-held east, is reportedly standing by her, bucking tradition to reject any assertion of a stain on her reputation from the alleged sexual crime. Rebels in Benghazi, the de facto rebel capital, have also held rallies to support her.

For one thing, as awful as rape is, it is hardly uncommon anywhere in the world, and the fact that this story would get so much attention—and generate such a strong response—has to be viewed with restraint.  It may not be true, and even if it is, why would it get this much publicity at this particular moment, given the norm of brutality under Qaddafi (and many other rulers around the world.)

For perspective, let’s look at the story of Saddam Hussein’s soldiers supposedly tossing babies out of incubators during his occupation of Kuwait. This incident went a long way toward convincing Americans to support George HW Bush’s invasion of Iraqi-held Kuwait. Here’s a good primer on this incident, and psy-ops and war in general, from PRWatch:

[T]he most emotionally moving testimony on October 10 came from a 15-year-old Kuwaiti girl, known only by her first name of Nayirah. According to the Caucus, Nayirah’s full name was being kept confidential to prevent Iraqi reprisals against her family in occupied Kuwait. Sobbing, she described what she had seen with her own eyes in a hospital in Kuwait City. Her written testimony was passed out in a media kit prepared by Citizens for a Free Kuwait. “I volunteered at the al-Addan hospital,” Nayirah said. “While I was there, I saw the Iraqi soldiers come into the hospital with guns, and go into the room where . . . babies were in incubators. They took the babies out of the incubators, took the incubators, and left the babies on the cold floor to die.”

Three months passed between Nayirah’s testimony and the start of the war. During those months, the story of babies torn from their incubators was repeated over and over again. President Bush told the story. It was recited as fact in Congressional testimony, on TV and radio talk shows, and at the UN Security Council. “Of all the accusations made against the dictator,” MacArthur observed, “none had more impact on American public opinion than the one about Iraqi soldiers removing 312 babies from their incubators and leaving them to die on the cold hospital floors of Kuwait City.”

At the Human Rights Caucus, however, Hill & Knowlton and Congressman Lantos had failed to reveal that Nayirah was a member of the Kuwaiti Royal Family. Her father, in fact, was Saud Nasir al-Sabah, Kuwait’s Ambassador to the US, who sat listening in the hearing room during her testimony. The Caucus also failed to reveal that H&K vice-president Lauri Fitz-Pegado had coached Nayirah in what even the Kuwaitis’ own investigators later confirmed was false testimony.

So, let’s be hyper-vigilant in these crucial early days of war creep.