White supremacy is a deep-rooted problem in American policing, and Democrats in Minnesota, which has been rocked by the police killings of George Floyd and Daunte Wright, are trying to address it in a way that hasn’t been done anywhere else in the country.

Tucked into a slew of police reforms included in a $2.7 billion public safety and criminal justice reform omnibus bill that passed the state House last month, is a provision that would ban law enforcement from “affiliating with, supporting, or advocating for white supremacist groups, causes, or ideologies or participation in, or active promotion of, an international or domestic extremist group that the Federal Bureau of Investigation has determined supports or encourages illegal, violent conduct.”

But the measure must survive ongoing negotiations between the Republican-controlled Senate and Democratic-controlled House. While GOP Senators say they recognize the problem, they have clearly stated their unwillingness to include policy proposals, such as police reform, in the omnibus bill and instead want to focus only on spending measures in the rush to pass a budget.

If the provision were to pass, Minnesota would be the only state with such a law.

“Until the election of Donald Trump, we weren’t really willing as a country to admit that police officers were involved in that type of thing,” Vida Johnson, an associate professor of law at Georgetown University, told WhoWhatWhy. “There was no impetus for that kind of law.”

Yet even though the FBI and the Department of Homeland Security have now sounded the alarm about white supremacists infiltrating law enforcement and labeled white supremacy the “biggest domestic terrorism threat in the United States,” little has been done to address the systemic problem.

“I don’t think this should be a partisan issue,” said Minnesota state Rep. Cedrick Frazier (D), who introduced the anti-white supremacy bill. “I don’t think it should be controversial if at the state level we’re trying to address that. I think that is something we should be actively doing,” he told WhoWhatWhy.

Beyond the politics, bills that prohibit affiliation with white supremacist groups, or any other group for that matter, are difficult to pass because they raise constitutional issues.

“American law generally frowns on guilt by association,” Eugene Volokh, First Amendment scholar and law professor at the University of California, Los Angeles, told WhoWhatWhy. “American law recognizes people can join all sorts of groups and have all sorts of beliefs.”

With that in mind, he said, the provision proposed by Minnesota Democrats is unconstitutionally vague in its current form.

Frazier said he would be open to clarifying the language, adding that “If someone thought the law was unconstitutional they would actually have the right to challenge that law.”

It’s an issue that the federal government is grappling with as well. The Biden administration has declared that rooting out white supremacists from the military and Department of Homeland Security is a top priority following the January 6 Capitol insurrection, which led to the arrest of at least 52 active or retired military, law enforcement, or government service employees.

Homeland Security Secretary Alejandro Mayorkas recently noted that while he was aware of the right to free speech, “There is a marked difference between that right and violence in furtherance of extremist ideologies.”

With or without such a law, the task of screening police recruits and current officers for extremist views is mostly left to police departments.

“Unfortunately, police departments are very opaque,” said Johnson, who has studied white supremacist infiltration in police. “It’s really hard to know what their policies are, depending on where you are.” 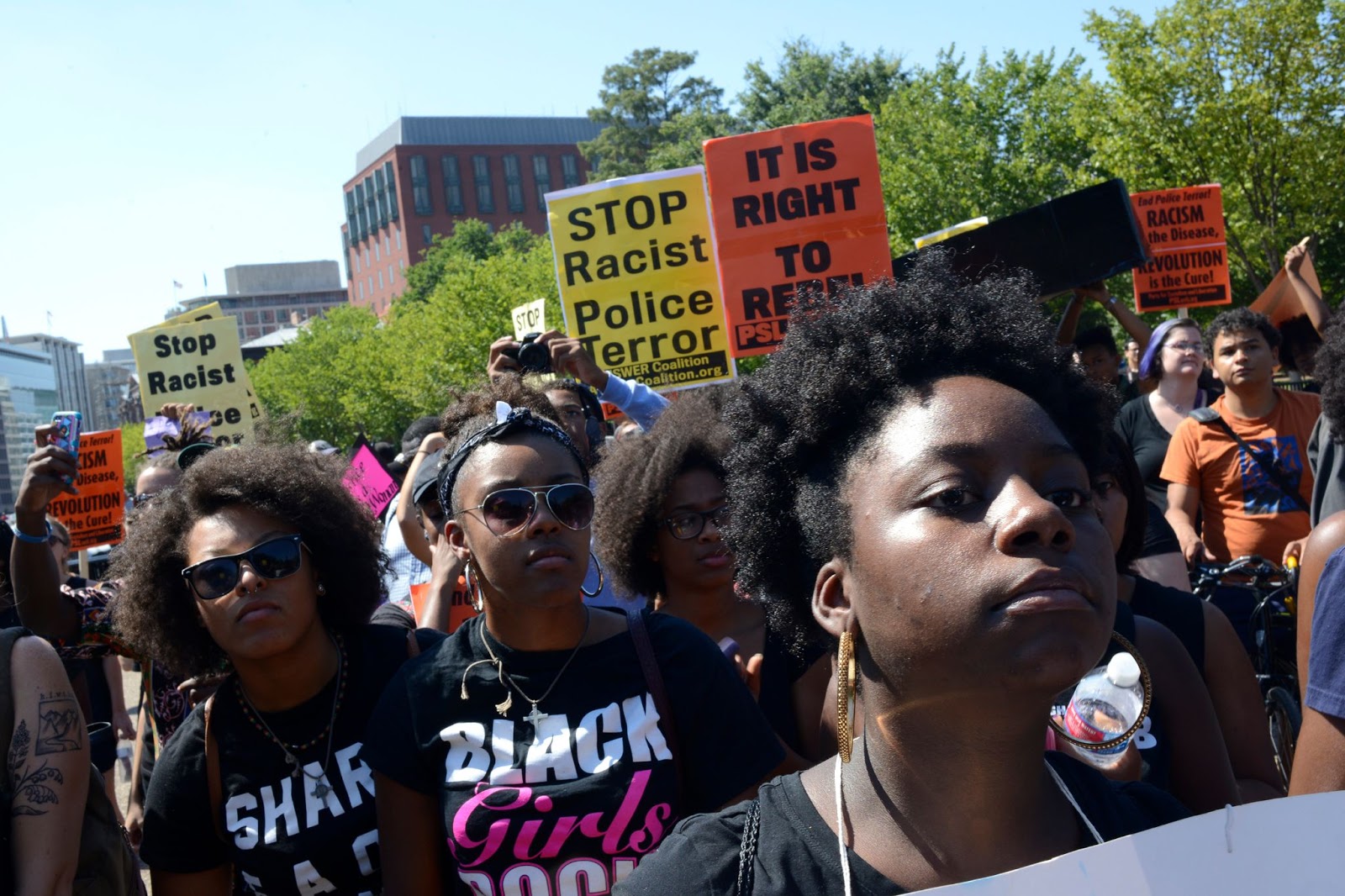 Social justice activists and supporters gathered in Lafayette Park and on Pennsylvania Avenue in Washington, DC, in front of the White House to participate in the Blackout DC 2015 rally and march against police and vigilante killings of people of color on August 15, 2015. Photo credit: Stephen Melkisethian / Flickr (CC BY-NC-ND 2.0)

History shows that American law enforcement has grappled with racism since its inception, but the current effort by far-right extremists to win over law enforcement is unprecedented, warns Devin Burghart, executive director of the Institute for Research and Education on Human Rights, an organization that studies right-wing groups.

In 2017, the Plain View Project, founded by Philadelphia lawyer Emily Baker-White, compiled a database of thousands of racist Facebook posts by current and former police officers in eight departments across the country.

But in many cases, proving direct ties between officers and white supremacist groups might be difficult.

“We’re seeing more members of law enforcement attracted to these different far-right organizations, but it’s being pitched in a much more subtle manner,” and officers are not as public about their identification with those organizations, Burghart said.

Violent extremist groups like the Three Percenters, Oath Keepers, and Proud Boys are known for their affinity with law enforcement, but less visible groups should not be ignored, according to experts.

“Newer organizations are often even less explicit about their far-right ties and are more just kind of wrapping it in the red, white, and blue and support for law enforcement,” Burghart continued. “But if you scratch the surface you can find that there are some far-right actors behind them and they’re using this as a way to curry favor and/or gain new recruits.”

Meanwhile, all 16 members of the Minnesota Peace Officer Standards and Training Board (POST) voted last month in favor of a ban on police officers associating with white supremacist groups.

“If law enforcement wants to earn my trust back or if I want to feel like I can trust law enforcement around my little Black boys that I’m raising, I would strongly recommend that the profession and this body adopt an anti-racist position and expel whatever seeds may be in the soil of law enforcement that has produced the racial disparities that we have seen today,” said Justin Terrell, a POST board member, before the vote was taken.

The ban could take months before being implemented as it goes through the lengthy rules-making process. While the rule would still not be codified into law, it would mean an officer could face losing their license if found in violation.