It’s Been a Year — Where Is the George Floyd Policing Act?

This week, hundreds have gathered in Minneapolis, joining Floyd’s family, local activists, and politicians, to commemorate the man whose portrait has been painted on murals across the world.

Since his murder, an array of legislative proposals have been introduced at the local, state, and federal levels.

In Washington though, some lawmakers will not be able to commemorate May 25th the way they hoped for: by voting on the George Floyd Justice in Policing Act.

During his first address to a joint session of Congress on April 28, President Joe Biden urged Congress to pass the police reform bill by the anniversary of George Floyd’s death.

Rep. Karen Bass (D-CA), who has been working on a bipartisan version of the bill with Sens. Cory Booker (D-NJ) and Tim Scott (R-SC), said that the bill is not yet ready for a vote in the Senate.

“What’s most important is that we get it right and that it be substantive, even if it’s a couple of weeks later,” Bass told reporters last week. “I won’t say we’re apart on all of these issues, we just haven’t finished.”

“We’re making good progress, hopeful progress, but we still have a lot of work to do,” Booker told CNN’s Dana Bash on Sunday.

The police reform bill, which Bass first introduced last year, passed for a second time in the House in March. A bipartisan middle ground in the Senate could potentially up the bill’s chances of gathering the 60 votes necessary to overcome a filibuster and pass in the Senate. 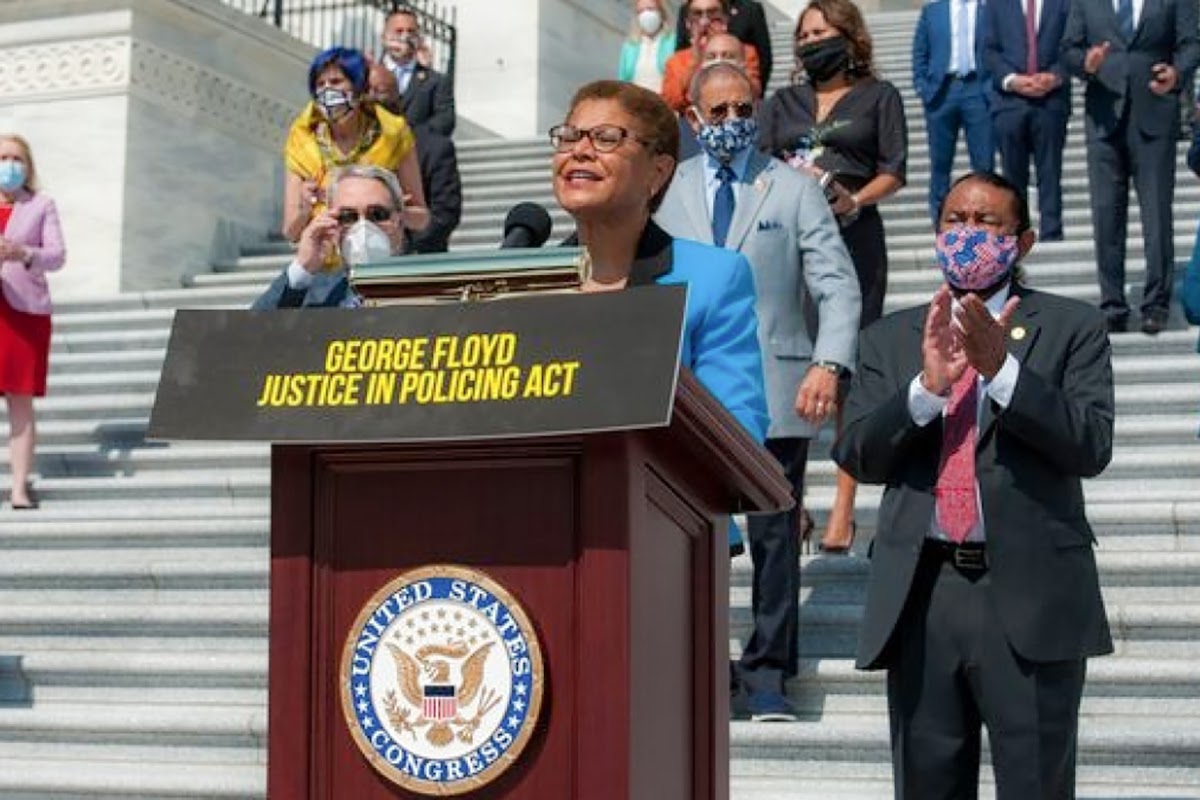 Rep. Karen Bass (D-CA), author of the George Floyd Justice in Policing Act, promoting the bill on the steps of the US Capitol in Washington, DC. Photo credit: US House

Timeline of the George Floyd Justice in Policing Act 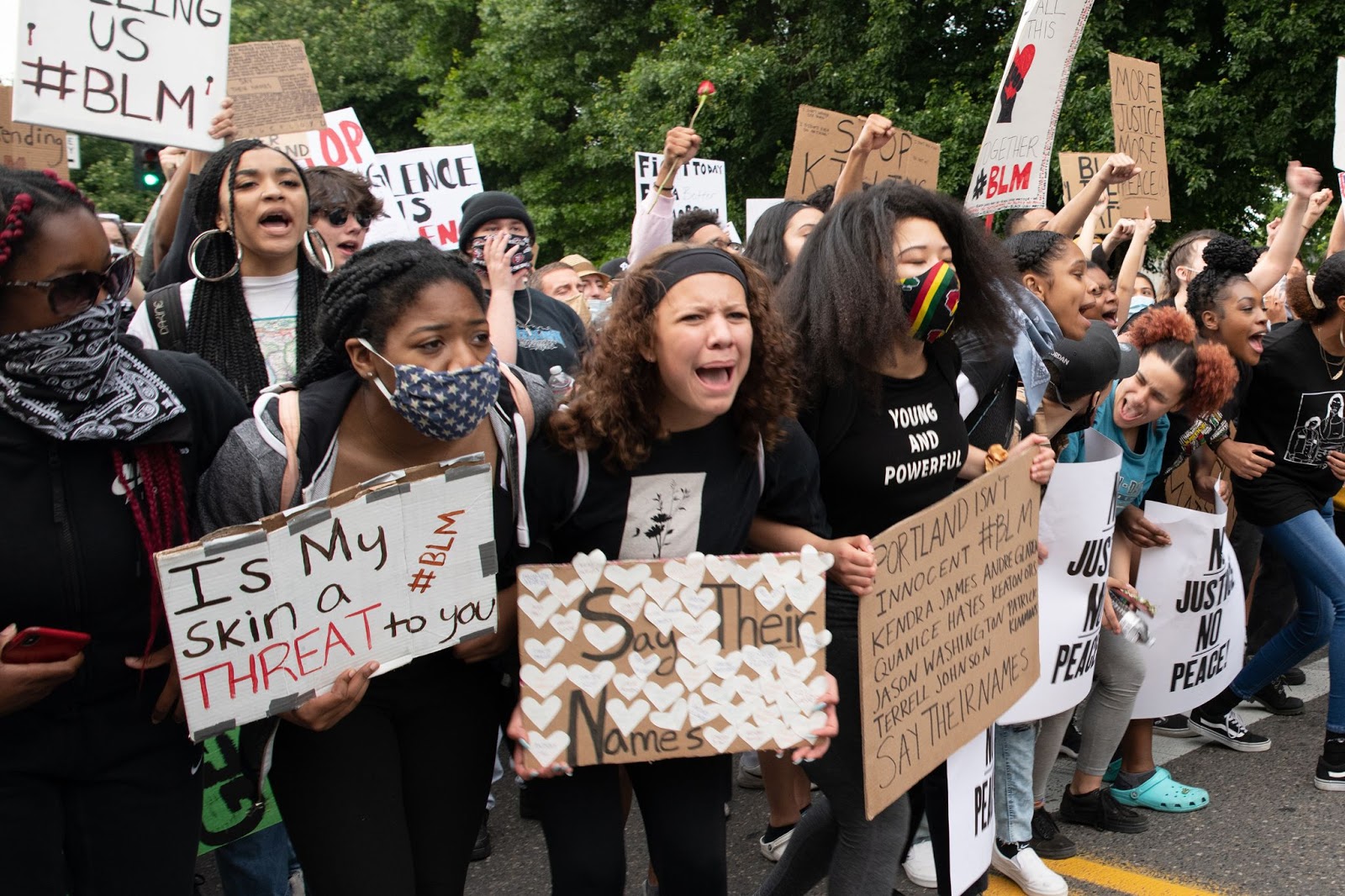 Thousands of people marched in Portland, OR, on June 4, 2020, to protest the murders of George Floyd, Breonna Taylor, Ahmaud Arbery, and others at the hands of police. Photo credit: Photo credit: Matthew Roth / Flickr (CC BY-NC 2.0)

What’s the Hold Up?

While hundreds of civil rights organizations and activists are openly supporting the legislation, it has faced opposition from the right and from police unions. Last year, former President Donald Trump threatened to veto the bill if it were to pass. And even though Democrats have tried to stay away from calls to “defund the police” pushed by some activists and progressives, Republicans use that as a political weapon against the bill.

But both parties actually agree to some extent on the need for police reform. Negotiators have found consensus around supporting measures like banning police chokeholds, creating a national database of suspect officers, and implementing new training standards.

At the center of dispute in the current negotiations, however, is the bill’s call for eliminating or limiting “qualified immunity,” which protects officers and police departments from being sued for misconduct. In the 1982 Harlow v. Fitzgerald ruling, the Supreme Court held that “government officials performing discretionary functions, generally are shielded from liability for civil damages insofar as their conduct does not violate clearly established statutory or constitutional rights of which a reasonable person would have known.”

“This is not about going after good officers, this is about when officers have breached the civil rights of another American citizen. … We need this to create real accountability,” Booker said.

But some Republican senators argue that “exposing police officers to lawsuits could cause them to adopt less aggressive and less effective tactics,” according to the Washington Post, and make it more difficult to recruit police officers.

Another sticking point is Democrats’ efforts to lower the threshold to criminally prosecute officers — something Scott has publicly opposed — to which Booker responds: “If we keep saying that somehow our officers are above the law, that will never establish the kind of trust that we need in America to move forward.”

Ultimately, what’s keeping the bill from reaching the president’s desk, theGrio reported, is “Republicans seeking buy-in from police organizations before making any concessions.”

“It’s going to be very important in the next couple of days as the negotiations proceed that some of the national law enforcement agencies cease their opposition and begin to work with the House and the Senate to move this legislation forward,” a high-ranking Democrat, who wished to remain anonymous, told theGrio.