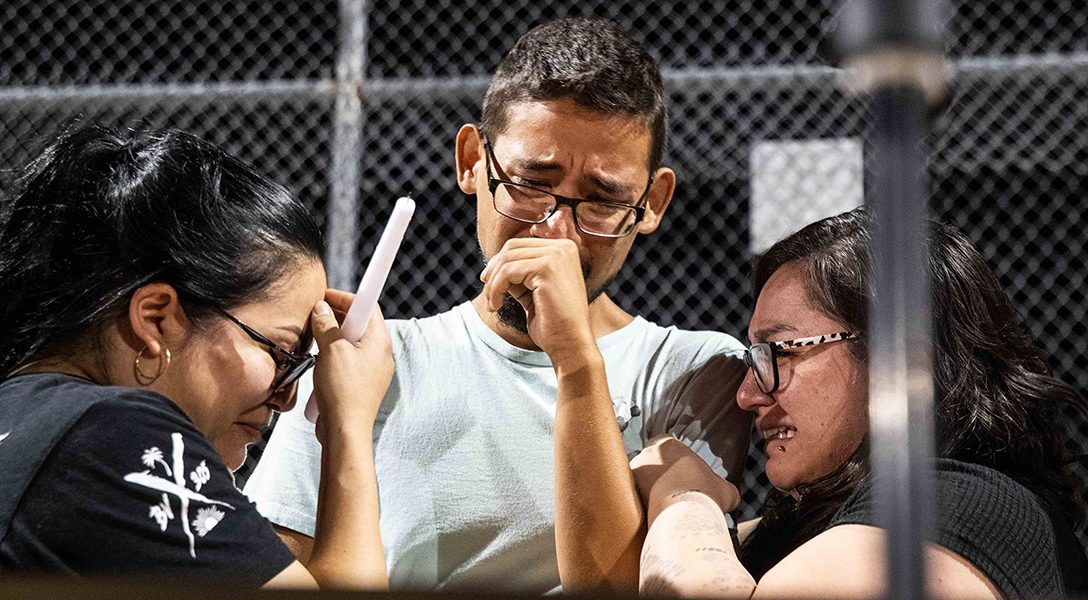 Melisa Gonzalez, Jesus Romero, and Raven Ramos — three of the Walmart workers who helped people to escape during a mass shooting occurred on August 3, 2019, in El Paso, Texas — get emotional during a vigil at Ponder Park in honor of the victims in El Paso on August 4, 2019. Photo credit: © TNS via ZUMA Wire
Criminal Justice

Four years ago, “fear of mass shootings” did not even appear on the American Psychological Association’s annual survey of things that stress out Americans. Now, however, it has become the single biggest stressor in their lives, according to the most recent sampling by the APA.

Slightly more than seven out of 10 respondents said they fear gun massacres, up from 62 percent last year. One of the reasons for the big jump may be the timing of the poll. The monthlong survey had just begun when two mass shootings, in El Paso, Texas, and Dayton, Ohio, left a total of 32 people dead.

Further evidence that these massacres had a direct impact can be found in the demographic breakdown of the poll. Hispanics, who were specifically targeted by the shooter in El Paso, were most likely (84 percent) to rank mass shootings as a major source of stress. They were followed by other minorities, while white Americans were least likely to list mass shootings as a stressor.

However, the two massacres alone do not explain why fear of violence now tops the list of things Americans are personally concerned about.

The increased frequency and lethality of these events — which happen in the US at a much higher rate than elsewhere in the world — contribute as well, according to Vaile Wright, clinical psychologist and member of the APA’s Stress in America team. “There has been an increase [in mass shootings],” she told WhoWhatWhy. “And there doesn’t seem to be any real movement toward a solution.”

Wright argues this creates a so-called accumulation effect. The same thing keeps happening over and over, which results in hypervigilant people who constantly feel on edge. An extreme example of this could be witnessed in 2002, when a father-and-son sniper duo terrorized Washington, DC, and people were afraid to leave their homes.

More recently, after the El Paso and Dayton mass shootings, one-third of Americans polled by the APA said they avoid going out to certain places because they are so afraid of becoming targets for the next mass shooting.

Media coverage plays a big role as well. “It’s hard to get away from images and rhetoric about it,” Wright said, adding that this results in people feeling “a sense of uncertainty.”

Even the APA seemed to be unaware of the magnitude of this concern. It wasn’t until recently that the group started including mass shootings in this survey. In previous years, the questions referenced personal stressors that didn’t include mass shootings or the environment. But that has shifted because more people began reporting gun massacres to psychologists as a personal factor for stress.

These concerns have now displaced healthcare worries atop the list of the survey. This year, various health-related worries were the second largest stressor of Americans at 69 percent.

Another recent addition to the APA survey is stress related to climate change, which was up 5 percent this year, to 56 percent.

“There is a lot of uncertainty in our world right now — from mass shootings to climate change. This year’s survey shows us that more Americans are saying these issues are causing them stress,” said Arthur Evans, APA’s chief executive officer. “Research shows us that prolonged feelings of anxiety and stress can affect our overall physical and mental health.”

The stressors are not directly related to how likely a fear is to become reality, but that does not make them less worrisome, especially if they are completely out of a person’s control. For example, Americans are relatively unlikely to die in a mass shooting but are very concerned about this happening — in part because it is covered so extensively.