What Bush Said About 9/11 Behind Closed Doors. Part 2

Last week I began discussing a recently released but little-noted summary of President George Bush and Vice President Dick Cheney’s off-the-record White House meeting with members of the 9/11 commission. This was the best and really only chance to find out crucial details about that mind-boggling disaster. So, what transpired and what did we learn? You can read Part 1 here.

One point that particularly struck me about the recently-released summary of that Oval Office meeting was that although Bush said his response strategy involved killing terrorists before they could kill us (a little late, to be sure), he also answered a question about whether the CIA might try to kill al-Qaeda leader Osama bin Laden. Bush, according to the summary, said that CIA Director George Tenet told him that “killing bin Laden wouldn’t destroy al Qaeda.”

In other words, Bush thought that killing terrorists was a good idea, just not particularly their leader. That’s especially interesting given the long and close ties between the Bush family and the bin Laden clan, from which Osama was said to be estranged. (See my book, Family of Secrets, for more on this.)

Between 9/11 and bin Laden’s death, al-Qaeda and its affiliates carried out more than a dozen terrorist attacks around the world which left hundreds dead, so Bush’s assertion that there was no point in taking out bin Laden is even more eyebrow-raising.

According to the US government, bin Laden was finally killed years later, in 2011, in an operation inside Pakistan — ironically ordered by the Democrat Barack Obama.

Stepping Around the Sinkhole

The commission members and Bush/Cheney apparently discussed only briefly al-Qaeda’s good friends in the Saudi regime (!). When 9/11 Commissioner John Lehman told Bush the “big issue was the role of the Saudis,” Bush basically said that was a tough one, and that it would be necessary to get the Saudis to “change their ways.”

For years, Saudi Arabia has been the main defendant in a multibillion-dollar federal lawsuit filed by 9/11 families, arguing that the kingdom aided and abetted the al-Qaeda terrorists. Fifteen of the 19 hijackers — plus Osama bin Laden himself — were Saudis. 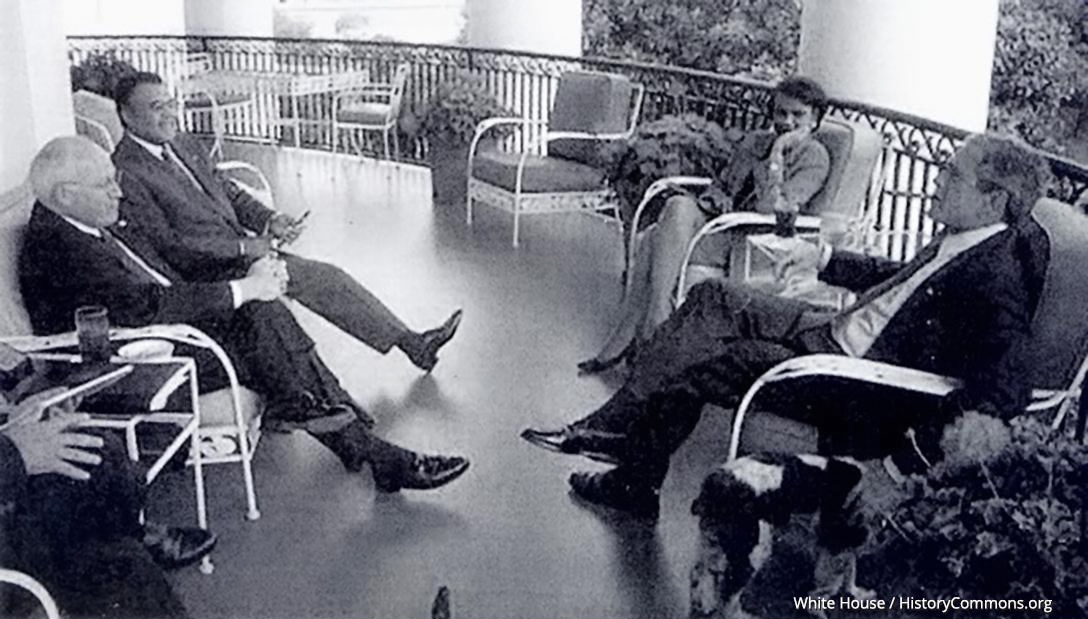 As noted by the Florida Bulldog (an independent investigative news site), the 9/11 commissioners stayed pretty clear of this explosive topic, never asking Bush and Cheney what they talked about with Bush’s close friend Saudi Ambassador Prince Bandar bin Sultan, in a meeting on the White House’s Truman Balcony, just days after the attacks.

Bush praised his Department of Homeland Security — said it was “doing a good job” — and praised the Federal Emergency Management Agency, which a year later massively botched the response to Hurricane Katrina, a storm that caused flooding which wiped out large parts of New Orleans and killed more than 1,800 people. (See WhoWhatWhy’s reporting on Bush’s cronies at FEMA).

Who Was Really in Charge?

One of the main takeaways, it seems to me — per analysis by Robbyn Swan, co-author of the Bulldog piece and author of the 2011 book The Eleventh Day — is that Team Bush was terribly worried that Bush/Cheney would be forced to admit that Cheney, not Bush, had actually been in charge that day, and in that capacity had breached the chain of command and ordered that a passenger jet (suspected of having been hijacked) be shot down by the military.

The commission members could see that what they were being told contradicted other information, but there was only so much they could do with Bush’s effective Yes-I’m-an-idiot- but-you-can’t-say-so act.

Were it known that, in effect, Cheney was the president and Bush a hapless figurehead on that fateful day… well, that might have been bad for national security, or at least national sanity.

Skid Marks on Roads to Nowhere

The 9/11 Commission apparently did not follow up the few important leads that emerged during the session. For example, under questioning, Cheney said that in the summer of 2001 he’d relayed threat reports to the Saudi crown prince about potential al-Qaeda attacks on US facilities in that country. The vice president said he told Saudi King Abdullah that the US wanted to send a team to work with the Saudis on that, and that the countries’ intelligence chiefs had been discussing it.

From the summary, it looks like no one bothered to ask what happened after that — which seems kind of an obvious line to pursue, since the attacks on America came just two months later.

One commission member, Lehman, claims that the recently released summary downplays his aggressive questioning of Bush on Saudi high-level complicity — including how checks from the wife of Bush’s personal close friend Prince Bandar ended up in the hands of Saudis who may have been the hijackers’ enablers. Several years ago, he told a reporter that Bush “had dodged the questions.”

And he told the Bulldog about other dicey elements of the Saudi connection to 9/11:

The Saudi role in financing Jihadist institutions around the world and the fact that no President had ever raised this with the Saudis, the role of employees of Saudi institutions who had actively aided and abetted some of the Saudi hijackers, the contributions of Prince Bandar’s wife to two of the hijackers, and other related issues with the Saudis.

Lehman says that, astonishingly, rather than address this, Bush simply and literally turned his back on him. “That,” he wrote, “is something I shall never forget.”

“We were frustrated that we had been shut down before we could run to ground the Saudi government officials that had actively helped the hijackers, or many of the other issues that were raised during our investigation that involved Saudi Arabia,” Lehman said.

The government generally continues to stonewall on disclosures. Thousands of 9/11 Commission records are still classified. The only reason we have this summary now is that Erik Larson, a DC-area 9/11 researcher, requested it from an obscure body of various government entities: the Interagency Security Classification Appeals Panel. A decade ago!

For more on this elusive, astonishing, and appalling story, go here.