Hello, friends. Here’s the latest installment of my new Substack newsletter. I hope you like it. You can subscribe here.

As a subscriber, you’ll enjoy early access to my work before it’s posted at WhoWhatWhy.

In the wake of Donald Trump’s unexpected election in 2016, a familiar litmus test became popular among the liberal set who faithfully tuned into MSNBC for nightly solace: If you saw something bad in American politics, the Russians had a hand in it.

One problem with the “Russiagate” mania is that at least some of it hinged on wishful thinking — a refusal to believe that large numbers of Americans would vote for such a manifestly unqualified candidate. But acknowledging our error in overestimating Putin’s influence on the 2016 election should not blind us to the fact that the Russians actually were behind some of what happened.

This past weekend, The New York Times followed up on scholarly research that convincingly argued that, yes, Russian military intelligence and government-connected contractors did indeed sow discord in the United States during and after the 2016 election by disseminating false information through bogus social media accounts. (This fake information, the report noted, was then amplified by high-volume conservative accounts such as @PrisonPlanet.)

And in 2017, Russian disinformation secretly inflamed rifts in the American women’s movement and, in the ensuing chaos, managed to blunt its momentum.

Though Silicon Valley has tried to ban or at least identify Russian government-connected social media accounts, new sources of disinformation pop up daily. Proof they’ve achieved some success can be seen and heard whenever the invasion of Ukraine comes up. The impulse to disbelieve anything the State Department says, or to dismiss any popular movement around the world as a CIA operation, has its origins in Kremlin talking points — and conveniently ignores  decades of CIA ham-handed bungling and haplessness. And I say this as someone with years of reporting on cases of deadly CIA wrongdoing.

Meanwhile, it’s absolutely true that the US has its own covert foreign-opinion-shaping apparatus. After 150 social media accounts connected to the US government were pulled — some of which countered Russian propaganda related to the war, while others rebutted Chinese claims that COVID-19 was created in a US military lab — the Pentagon is on the hook to provide answers.

But chaos doesn’t always come from  covert ops. Overt disruptions, like Republican Florida Gov. Ron DeSantis’s recent move to trick mostly undocumented foreigners into taking a flight up to Martha’s Vineyard, the exclusive island where affluent liberals (and Alan Dershowitz) hang out, are often more effective.

The actions of DeSantis and fellow traveler Texas Gov. Greg Abbott (R), who has been busing migrants to Vice President Kamala Harris’s doorstep, are somewhat analogous to Russia’s “filtration” system, in which at least hundreds of thousands of Ukrainians have been forcibly relocated to Russia. While one is a coerced resettlement campaign to disrupt Ukrainian national and ethinic identity and the other is a publicly funded political stunt to stir American nativism, both are examples of disruption by design.

But few actors in US politics are as disruptive in so many different ways as Sen. Lindsey Graham, Republican of South Carolina.

It’s hard to trace a consistent method in his mad panoply of attention-seeking policy gyrations. A Trump skeptic turned sycophant, Graham has inserted himself into the Russia debate with a series of contradictory pronouncements. He’s called for Putin to be assassinated and introduced a measure to identify Russia as a state sponsor of terrorism. Yet he also used the Senate Judiciary Committee to throw cold water on the Trump-Russia narrative.

More recently, Graham has turned to domestic policy, introducing a bill calling for a federal abortion ban. This baffling initiative is giving the GOP establishment fits because the party’s “state by state” approach to doing exactly the same thing works as a much better “sell” politically. Indeed, he seems to have handed Democrats yet another assist in what increasingly looks like a close outcome for control of the Senate and House — a prospect that is itself a product of GOP overreach with the Supreme Court’s Dobbs decision that nullified Roe v. Wade. 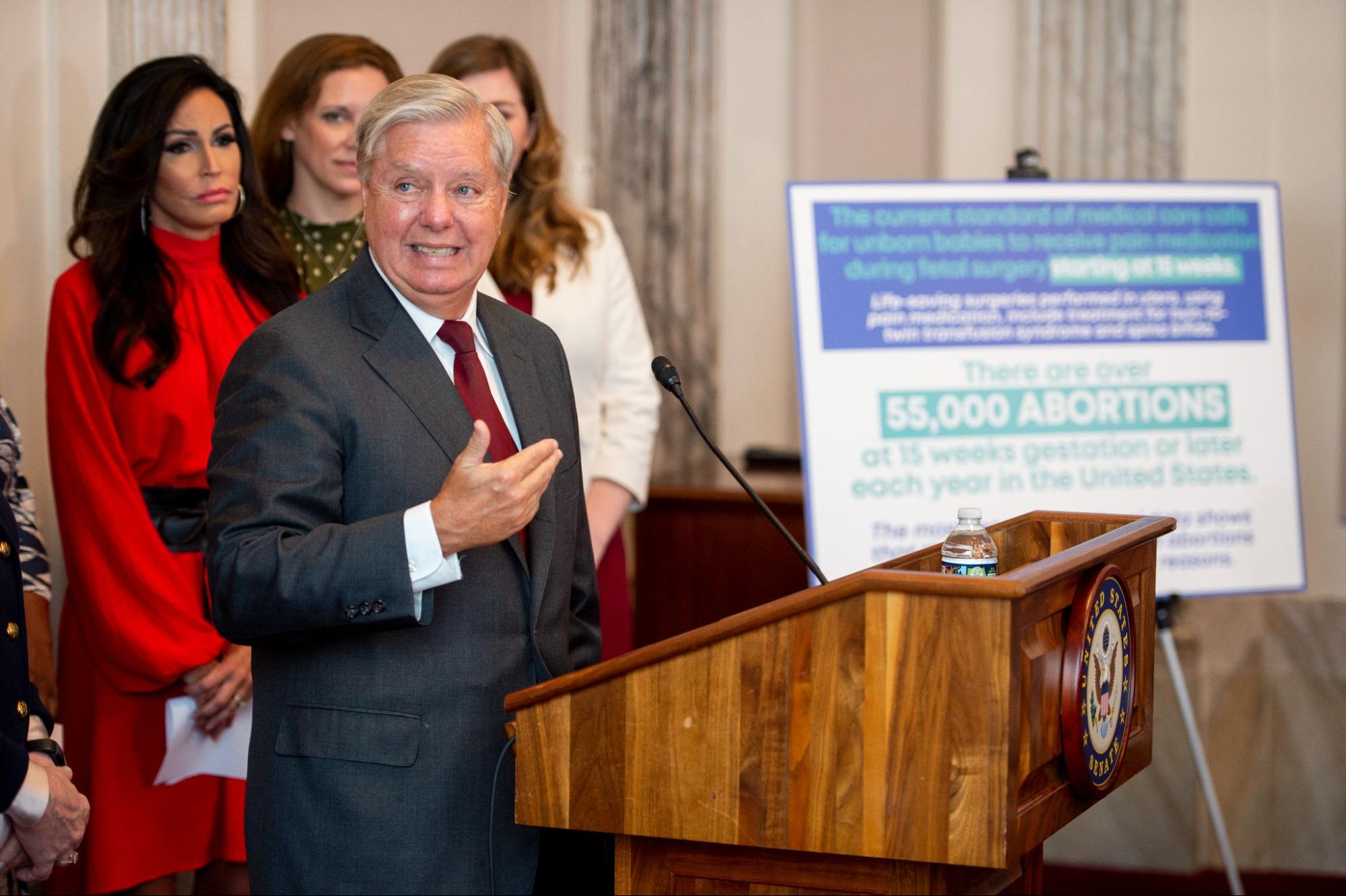 Trying to plumb the reasoning behind Graham’s scattershot actions may be a fruitless endeavor. The one constant is that he can always be counted on to cause chaos and consternation.

Earlier this month, Trump phoned the mother of Ashli Babbitt, the woman who was shot and killed by US Capitol Police while trying to climb through a shattered glass window on January 6.

Babbitt’s mother, Micki Witthoeft, was addressing a rally outside the DC jail where alleged insurgents are being held, complaining about how the attackers have been treated.

When Trump called, she held the phone up to the microphone for all to hear.

“We love Ashli, and it was so horrible what happened to her,” Trump told the crowd. “That man [who] shot Ashli is a disgrace and then he goes on television and it looks like he was actually bragging about it.”

You might think Graham would be upset by all this. After all, Trump is embracing the rioters who violently attacked police officers and sent lawmakers fleeing for their lives. Graham himself was part of that panic, and at the time, he left no doubt about which side he was on.

“You’ve got guns. Use them.” — Sen. Lindsey Graham

While frantic lawmakers were being led to a safe location, Graham yelled at the Senate sergeant-at-arms: “What are you doing? Take back the Senate! You’ve got guns. Use them. We give you guns for a reason. Use them.”

Graham was calling for the police to shoot Ashli Babbitt—and everyone else storming the Capitol.

We now know that Trump refused to send reinforcements to the beleaguered Capitol Police on January 6, and in fact sat idle for several hours watching television while an insurrection disrupted the seat of American democracy. Yet I cannot find any indication that Graham is bothered by any of this. (Graham’s office did not respond to my message seeking an interview or comment.)

Instead, his most recent attention-grabbing comment on the topic of violent rebellions came on August 28, on Fox News, when he warned that if Trump is prosecuted for illegally taking classified documents, we may expect “riots in the streets.”

Trump emboldened the rioters who bodily threatened Graham and his colleagues and Congress, actions that resulted in the fatal shooting of Babbitt — which Graham seemed to call for when he felt his own life was in danger.

So by rights Graham should have a giant beef with Trump and his views on the historic attack. Yet he’s somehow able to reconcile the irreconcilable.

And not just on Trump and January 6. Back in 2015, Graham said the best way to make America great again was to tell Trump to “go to hell.” In May 2016, when Trump was romping through the primaries, Graham glumly tweeted, “If we nominate Trump, we will get destroyed…….and we will deserve it.”

If we nominate Trump, we will get destroyed…….and we will deserve it.

That segued into four years of Graham’s embarrassing obsequiousness to the MAGA man.

During the first impeachment proceedings, Graham told the Washington journalism power couple  Susan Glasser and Peter Baker that nobody in the GOP would challenge Trump no matter what he did. “He could kill fifty people on our side and it wouldn’t matter,” he said.

Did Trump’s own bizarre behavior — his kowtowing to the Saudis, his siding with Putin over his own intelligence services in Helsinki — bother Graham? To Glasser and Baker, he described Trump as a “lying motherf*cker.” However, he added a qualifier. Trump was nonetheless “a lot of fun to hang out with.”

“Trump and I, we’ve had a hell of a journey,” Graham said later in the day on January 6, after Babbitt’s shooting, after the rioters were cleared, and after the certification proceedings resumed — whereupon he refused to join Missouri Sen. Josh Hawley and other senators in disputing the 2020 election. “All I can say is count me out. Enough is enough.”

And now he’s swung back. As he recently stated, “I hope President Trump runs again.”

Not that they lack a moral compass entirely. In fact, a lot of conservatives were deeply offended — legitimately so — by the self-serving hypocrisy of California Gov. Gavin Newsom (D) when he visited the exclusive French Laundry restaurant in Napa for a dinner party during his state’s COVID-19 lockdown, and of House Speaker Nancy Pelosi (D-CA) when she showed up for a hair appointment inside a San Francisco salon, without wearing a mask — while the entire city was shut down aside from outdoor activities.

Granted, some might say these were decidedly small-ish transgressions involving poor optics compared to Graham’s large-scale irrational and dangerous behavior. And they would be right.

Graham’s wild oscillations strain the bounds of normal political discourse. We all know the country is “divided” — but watching a public figure bob like a boneless puppet on the strings of a brainless puppeteer is something none of us have ever had to deal with before.

If this cartoonish behavior is the future of American politics, we already have an appropriately ironic caption for it in the popular GOP meme for their leftish critics: “Trump Derangement Syndrome.”

Nowhere is this more clearly demonstrated than in Graham’s pronounced self-contradictory attitude toward Russia and toward Trump’s baffling insistence on finding no wrong with anything Putin does.

Russian military intelligence must be looking at Graham — and Abbott and DeSantis, and anyone else who pulls a similar stunt — with delight. And thinking: We hardly need to lift a finger.