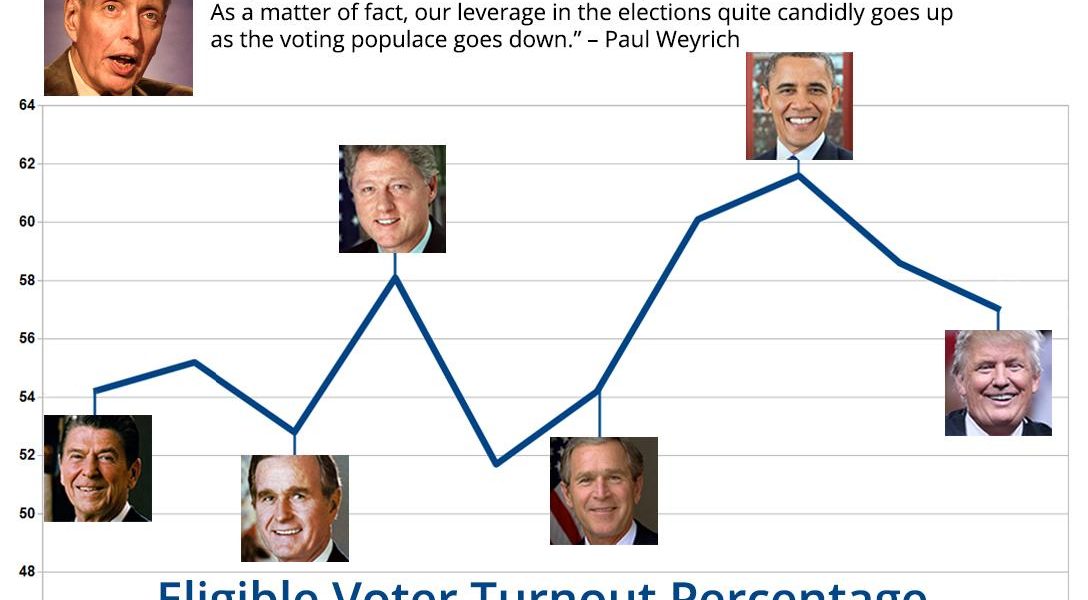 Chart of the Day: Paul Weyrich said of Republican chances of winning elections, "our leverage in the elections quite candidly goes up as the voting populace goes down." This chart shows presidential election winners from 1980 to present and the total percentage of eligible voters who participated. The data through 2012 is from the United States Election Project. For 2016, it assumes 57 percent eligible voter turnout based on FiveThirtyEight and widespread reporting. That final number may change a bit as more complete totals come in. Photo credit: c.berlet/publiceye.org / Wikimedia (CC BY-SA 3.0),  The White House and Gage Skidmore / Wikimedia (CC BY-SA 3.0)
Editors' Picks

Needed ingredients for good reality TV: outrageous and inappropriate celebrity behavior. The Celebrity Apprentice was a dress rehearsal for a Trump presidential-campaign. Will the White House now become the ultimate reality show?

Was the Election Rigged? (Reader Pat)

Investigative journalist Greg Palast, who spoke with WhoWhatWhy about Republican cross checking before the election, now shares some explosive numbers about disenfranchised voters.

From Sewage into Crude Oil (Milicent)

At the Pacific Northwest National Laboratory, they have found a way to turn sewage into biocrude oil, in minutes, with hydrothermal liquefaction, a process that mimics the geological conditions — high pressure and temperature – that create crude oil over millions of years.

Claims Brazile and Wasserman supported Clinton early on for personal gain, clearing the way for Trump. “You and your friends will die of old age and I’m going to die from climate change.”

After Brexit and Trump, There is Le Pen (Dan)

France’s right-wing National Front, led by Marine Le Pen, looks stronger thanks to the momentum created by Brexit and Trump. Now rebranded from its racially-tinged roots, will France’s far right see its day in the mainstream?