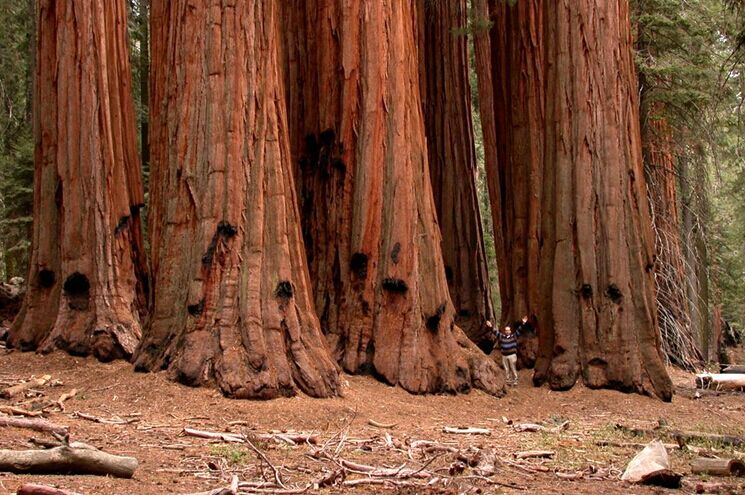 Sequoia National Park was established on September 25, 1890. The park spans 404,064 acres and is home to giant Sequoias including some of the largest trees on earth. In recent news, drought in California is causing concern about extinction of the Sequoias, and wildfires have also threatened stately trees. Photo Credit: Paul Rudenko / Wikimedia
We’re pleased to introduce PICKS — stories selected by our editors because they are important, surprising, troubling, enlightening, inspiring, or amusing. They will appear on our site and in our daily newsletter. And we invite you to recommend articles, videos, podcasts, etc. Please send them to picks@whowhatwhy.org.

As a result of the unlimited money in politics, the United States has become an oligarchy, former President Jimmy Carter told Oprah Winfrey in an interview that will be aired on Sunday.

“We’ve become now an oligarchy instead of a democracy,” the former president. “And I think that’s been the worst damage to the basic moral and ethical standards of the American political system that I’ve ever seen in my life.”

Carter added that there is no way that he could become president now, because he has neither the inclination nor the ability to raise the hundreds of millions of dollars it would take to win.

“Among other things, this data reveals that millions and millions of federal tax dollars went to ‘ghost’ schools that never even opened to students. The exact amount is unknown because the U.S. Department of Education is not required to report its failures, where money went to groups to help them start new charters that never even opened.

“This data set also provides reporters and citizens of each state an opportunity to take a closer look at how much taxpayer money has been squandered on the failed charter school experiment in their states….

“… nearly 2,500 charter schools have shuttered between 2001 and 2013, affecting 288,000 American children enrolled in primary and secondary schools, and the failure rate for charter schools is much higher than for traditional public schools.

“For example, in the 2011-2012 school year, charter school students ran two and a half times the risk of having their education disrupted by a school closing and suffering academic setbacks as a result of closure.”

“Q: What is your evaluation of social movements such as OWS [Occupy Wall Street] over the last twenty years? Have they been effective in bringing about change? How could they improve?

“Noam Chomsky: They’ve had an impact; they have not coalesced into persistent and ongoing movements. It’s a very atomized society. There are very few continuing organizations which have institutional memory, that know how to move to the next step and so on.

“This is partly due to the destruction of the labor movement, which used to offer a kind of fixed basis for many activities; by now, practically the only persistent institutions are the churches. So many things are church-based.

“It’s hard for a movement to take hold. There are often movements of young people, which tend to be transitory; on the other hand there’s a cumulative effect, and you never know when something will spark into a major movement. It’s happened time and again: civil rights movement, women’s movement. So keep trying until something takes off.”

“Martin Shkreli is health care’s Gordon Gekko, its wolf of Wall Street, the symbol of all that makes people uneasy about an industry that seeks to make money by selling treatments while vowing to care only about the well-being of vulnerable patients.

“For days, a seething social-media mob backed by an opportunistic politician or two has hammered the swaggering 32-year-old “pharma bro” who jacked up the price of an obscure but critical drug, was theatrically unapologetic about it and publicly called a journalist a moron for asking why.

“Shkreli’s actions were shocking for a simple reason: It was an unusual moment of complete transparency in health care, where motives, prices and how the system works are rarely ever talked about so nakedly. Shkreli’s company, Turing Pharmaceuticals, raised the price of Daraprim from $18 to $750 per pill because he could….”

And there you have the difference between the US establishment and … the current Vatican.
Fossil Fuel Divestment Has Grown to $2.6 Trillion in Assets (Russ)

“The fossil fuel divestment movement skyrocketed in the past year as hundreds of institutions and thousands of individuals committed to selling their oil, natural gas and coal holdings, according to a new report. So far, 436 institutions and 2,040 individuals representing $2.6 trillion in assets have agreed to sell their fossil fuel investments….”

Josh Marshall calls it “A story in which the DC press fixation on Clinton process stories manages to take completely innocuous developments and whip them into portentous new steps in the drama of wrongdoing.”

“In Spain, with one-fifth of its population jobless, the Indignados movement — that paralleled our Occupy — erupted with protests in 2011. But instead of fading from sight, by early 2014 the Indignados had set the stage for the birth of a new political party: Podemos, ‘We Can.’

“In only a few months, Podemos surprised everyone by winning 8 percent of the Spanish vote for the European Parliament, giving it five of 54 Spanish seats. One year later, in coalition with other grassroots movements, Podemos won mayor’s races in Barcelona, Madrid and other cities. Today it is Spain’s third largest political party. “Unprecedented” declared the pundits.

“The Party’s aim has been to “capture a desire for transparency and participation in politics” stirred by the Indignados movement….”

“VW’s defeat devices were subtler and more insidious. Instead of just turning off and on with the air conditioner, they took into account “the position of the steering wheel, vehicle speed, the duration of the engine’s operation, and barometric pressure” — a list of criteria that precisely mirrors the conditions of the EPA’s required emissions testing.

“This kind of sophisticated sneakery is only practical with software, and software also makes it possible to get away with (for a while). A dedicated circuit or a special valve would have been impossible for VW to hide. But it’s easy to conceal the scraps of code that check to see whether the car is being driven in a way that looks suspiciously like an emissions test. Modern cars already contain tens of millions of lines of code; what’s a few more between friends?”

‘We are preventing a third world war’: the foreigners fighting with Ukrainian rebels (“Cactus Pat”)

Media criticism group FAIR rightfully and routinely criticizes MSM over its frequent malpractice — and here over its dismal Syria coverage — but never bothers to tell its readers about sites such as WhoWhatWhy, which has, from very early on, provided a more accurate sense of what was going on in Syria.

OF INTEREST:
Not Only Secret Service Agents Get Drunk on the Job (Klaus)

In order to be authorized to kill in the name of her majesty the queen, a British secret agent needs a 00 designation and, apparently, a massive drinking problem.

Ahead of the release of the latest installment of the popular James Bond franchise, the British magazine “The Grocer” compared the drinking habits of the different incarnations of the most famous spy in the world.

It turns out that the current version of James Bond, played by Daniel Craig, is the biggest drunk of them all, consuming an average of 20 units per movie. Pierce Brosnan’s 007 came in second with 12 units, while Sean Connery and Roger Moore consumed an average of 11 each when they portrayed the spy.

One of the reasons the current Bond drinks the most might be the franchise’s sponsorship agreements with alcohol producers like Heineken and Belvedere vodka, according to The Grocer.

Pope Francis: Animals also go to Heaven (Milicent)
“We all know that Pope Francis cares deeply for the marginalized, but did you realize that his compassion bridges the species barrier? He suggests that animals will go to heaven and that the Virgin Mary ‘grieves for the sufferings’ even of mistreated livestock.

“‘Eternal life will be a shared experience of awe, in which each creature, resplendently transfigured, will take its rightful place,’” he has written.

“I share his conviction that dogs go to heaven — indeed, heaven would be diminished if there were no dogs. And it’s exhilarating to see a spiritual leader whose empathy goes beyond the widow and orphan to, say, the parrot (Francis once blessed a parrot belonging to a former male stripper).

“More on Francis’ empathy for animals in a moment. In a larger sense, it is this boundless compassion that has made him such a popular figure, even among non-Catholics….”

Anyway, something delicious about a situation where the only network on which a GOP front-runner refuses to appear … is Fox.

“‘The next couple of years will be exciting ones,’ says Joseph D. Puglisi, a Stanford University professor of structural biology who is working on meat alternatives. ‘We can use a broad range of plant protein sources and create a palette of textures and tastes — for example, jerky, cured meats, sausage, pork.’

“Puglisi is advising Beyond Meat, a start-up that is a leader in the field, ….

“‘We’re really focused on the mainstream,’ said Ethan Brown, the founder of Beyond Meat, over a lunch of fake chili, meatballs and hamburgers. It was a banquet of the bogus.

“Brown, 44, is deeply concerned by climate change and spent eight years in a company making hydrogen fuel cells. But he read that livestock cause more greenhouse gases than the entire transportation industry, and he wondered if he shouldn’t focus more on food.”

Fist Fights in Parliaments Around the World (Milicent)

Here is a website dedicated to the hilarious spectacle of parliamentary leaders — men in suits — getting into physical fights, with kicking, socking, hair-pulling, chair-throwing, and all kinds of mayhem. Get a ringside seat, but wear a raincoat!

A Parliament of Roaring Lions (Milicent)

Kruger National Park, South Africa. Here are four loquacious lions — all of whom have something to say, and they all want to speak at once. And each tries to get in the last word. One of them is too lazy to get up to speak, but he still deigns to raise his head to put in his two cents.