The Pandemic Was Bad for Workers. Can Shareholders Turn Things Around?

One would have to forgive the American worker for feeling under siege lately. Statistics show that lower-paid workers lost the most jobs during the pandemic. Nearly half of American workers have suffered mental health issues since the start of the pandemic. And blue-collar workers are shown to have faced bigger health risks and fewer opportunities to minimize their exposure to the coronavirus.

These workers were also twice as likely to contract COVID-19 than their white-collar counterparts according to Joblist, a job searching website.

But the pandemic may also be the spur for new initiatives to improve the quality of life for those same workers.

As noted in a previous feature, shareholder activism over recent years has been on the rise. And one measure of that activism — the number of shareholder resolutions filed at the annual meetings of public companies — has also steadily ticked upwards. Resolutions relating to climate change, criminal justice, and other social issues have not only become more common, but more successful as well.

But the nation’s trauma with COVID-19 has also brought other issues to the fore in corporate boardrooms.

“The twin crises of the year, i.e., the pandemic and the focus and national reckoning on racial justice, has led to more focus on workers and workers’ rights this year, and I am sure that will continue,” said Nadira Narine, senior program director of the Interfaith Center on Corporate Responsibility (ICCR), a coalition of institutional investors that press companies on environmental, social, and governance issues.

Workers in the Spotlight

“Without question, COVID, essential workers, the question of bonus pay: All of those issues have certainly focused everyone’s attention,” said Michael Pryce-Jones, senior governance analyst with the International Brotherhood of Teamsters.

The recent passage of a shareholder resolution at Wendy’s Restaurants calling on the company to implement protections for farmworkers in their supply chain, including protection from COVID-19, is cited as further evidence of this trend.

“That proposal got 95 percent of the vote,” said Mary Beth Gallagher, executive director of Investor Advocates for Social Justice, a faith-based investor-advocacy nonprofit.

Gallagher also pointed out that a similar shareholder resolution at Tyson Foods, Inc. this year received over 78 percent support from independent investors after a recent class action suit asserted that twice as many workers have died from COVID-19 at Tyson than at any other meat-processing company. (That resolution failed to win an absolute majority due to management and the founding family owning more than 70 percent of the total stock).

By a huge 70 percent margin, company investors opposed Marathon’s executive compensation packages, including a $6 million golden parachute to retiring CEO Gary Heminger. The move came amid safety concerns, but also after the company laid off nine percent of its workforce due to the pandemic, even after receiving $2.1 billion in funding from the CARES Act.

After this vote, Marathon also agreed to a six-year, collective-bargaining agreement with Teamsters Local 612, on terms seen as favorable to the union. This six-year agreement came after a strike lasting almost six months.

(Pryce-Jones was reluctant to draw a direct line between the successful shareholders’ resolution and the settlement of the strike, stating that labor and shareholder activity are separate. However, it is hard to imagine that the bad publicity the company received from its golden-parachute awards did not factor into the settlement of their Minnesota labor dispute.)

Beyond the successes that activists are having with specific companies, the pandemic has super-charged attention on previously existing social issues.

The Pandemic Puts the Focus on Human Rights

“COVID helped push things over the edge,” said the ICCR’s Narine. “Institutional investors are beginning to pay more attention to these [social] issues. … In May or so, [investment firm] BlackRock came out with their policy around how they were going to press companies on human rights.”

Nor is this the only sign. Before the pandemic, support for human rights due diligence (HRDD) resolutions, which request companies mitigate human-rights abuses in their operations and supply chain, averaged about 20 percent of the shareholders’ votes. After the pandemic took hold, support for HRDD resolutions jumped.

Four HRDD resolutions that Oxfam brought before the shareholders of four major companies — Amazon, Sanderson Farms, Pilgrim’s Pride, and Kroger — garnered the support of between 37 percent and 65 percent of investors. 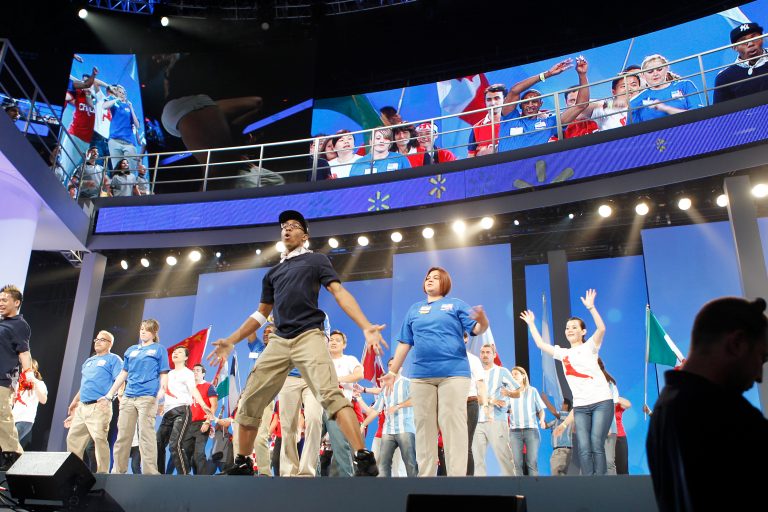 Corporate shareholders meetings are planned as blockbuster events to fire up shareholders and employees. Shareholder activists have been attending these events to file resolutions relating to climate change, criminal justice, and other social issues. Photo credit: Walmart / Flickr (CC BY 2.0)

Yet with this renewed momentum, even the most dedicated activists recognize the difficulty of bringing about change in companies with entrenched, anti-labor management.

“It is a stacked playing field. Corporations have immense resources at their disposal,” said the Teamsters’ Pryce-Jones. But he emphasizes that focusing on the investors is a route to change.

“The way in which these [shareholder campaigns] impact companies and raise living standards isn’t in the way most people think they do — that is, us going to a company and browbeating them. It is the influence, engagement, and education we have with other investors,” he said.

Still, the work of advocates does not stop with the success or strong showing of resolutions.

“For example, the Tyson’s shareholder meeting took place last February. It [the HRDD resolution] got 18 percent of the [total] vote. Since February, have things improved? No!” said Gallagher. “It still would not be a success until workers’ rights are protected.”

Yet for all of the obstacles that are in their path, shareholder activists see reason for some optimism.

“[A shareholder resolution] may be nonbinding, but it does carry weight,” said Narine.

She noted that over the past half-century, ICCR has worked on issues ranging from apartheid in South Africa to climate change. The organization has raised these issues with management through either direct dialogue or, failing that, shareholder resolutions. Narine said that while they have not been successful at every company, overall they have negotiated major changes and positive improvements to corporate policy.

While the pandemic has created new threats to workers, it has also created new opportunities for shareholder activists to improve working conditions.

“The long-term consequences of COVID-19 are difficult to imagine at this early stage. What we do know, however, is that the virus will strain all our global social and financial systems,” wrote ICCR institutional investors in a statement. “While we all face considerable challenges in this environment, there are things we can do to protect our society and the companies we invest in from the worst potential outcomes, and that includes protecting workers.”

At least in the short term, the pandemic has given workers’ rights greater visibility. But these issues were festering even before the pandemic hit.

“Many of these issues that will surface are not new issues that arose as a result of the pandemic, but rather exacerbated because of it. These are issues that have been around and surely will still be around if companies don’t act with a long-term vision,” said Narine.