The last week of May this year was a bad one for Big Oil. Sixty-one percent of Chevron’s shareholders voted in favor of a resolution calling for cutting back on the firm’s emissions. A Dutch court ruled that Royal Dutch Shell PLC would have to cut certain types of emissions by 45 percent by 2030, a far greater amount than the company had set for itself.

But the biggest jolt to the petroleum industry came when shareholder activists won three seats on the Exxon Mobil Corp. board of directors, defeating candidates favored by management.

Shareholder activists use their ownership of shares in a public corporation to bring about change. In Exxon’s case, activists see this coup not as a move to destabilize the company. Rather, they claim that Exxon management’s destructive and short-sighted environmental policies are also bad for the long-term financial interests of investors.

“The company [Exxon] continued to destroy value,” said Andrew Behar, CEO of As You Sow, a shareholder advocacy group. Behar noted the financial numbers management put out in the past were not accurate and that they needed to be audited and verified.

Others concurred with Behar’s views.

“There are three main factors that drove that victory [of the Exxon board vote],” said Eli Kasargod-Staub, executive director of the shareholder advocacy group Majority Action. “The first is Exxon’s absolutely abysmal financial performance over the last several years.” He said that the other factors were a lack of any credible long-term transition plan from fossil fuels to renewable energy and management’s intransigence toward the concerns of shareholders.

Behar pointed out that shareholder groups presented their concerns to Exxon management in 2010 and became so frustrated by management’s unwillingness to listen that they ran candidates against their board members.

This more existential investing philosophy may represent a break from the traditional view that management’s sole responsibility is to maximize shareholder profits without regard to a company’s impact on the environment, consumers, its workers, or the surrounding community. It’s a challenge to Milton Friedman’s economic philosophy that the only responsibility of a company’s leaders is to maximize the return to shareholders. But these activists want to push management toward recognizing a corporate responsibility of improving the conditions of their workers, the local community, and the environment.

What’s going on in Exxon’s boardroom is not an isolated event.

Some investor activists see the recent Exxon board elections as a potentially pivotal event. They feel it may galvanize other shareholder activists to hold the feet of unresponsive corporate management to the fire.

“Long-term shareholders have always had the power collectively to declare to boards of directors, ‘Look, here is what responsible behavior looks like. You either operate responsibly or we can replace you with leaders who will.’ And the genie cannot be put back in the bottle,” said Kasargod-Staub.

Behar felt similarly bullish on the prospects of successful challenges to entrenched and unresponsive corporate management.

Indeed, Behar cited the success of shareholder resolutions this year on a wide range of social issues as more proof:

A study by The Conference Board found a steady uptick in support of social and environmental shareholder resolutions. It found the average level of shareholder support increased from 19.5 percent in 2014 to 27.3 percent in 2019. In 2021, shareholders notched three wins with resolutions demanding greater disclosure of political spending. (The January 6 insurrection was seen as lending momentum to those efforts.)

Another hopeful sign for shareholder groups was the fact that the three large asset management firms — Black Rock, State Street, and Vanguard — who between them control 25 percent of the shares of S&P 500 companies, all supported the dissident Exxon board candidates.

And Kasargod-Staub forecasts more success next proxy season with electric power companies, especially Duke Energy and Southern Company. He is bullish on the prospects for insurgent shareholder resolutions and board candidates to shift companies from their reliance on coal and natural gas.

Jonas Kron, chief advocacy officer for Trillium Asset Management, said that companies are at the greatest risk to shareholder challenges “where they both have an old-school business model failure and they are not addressing … the rising interest in ESG [Environmental, Social and Governance].”

Some within the shareholder activist community are more guarded. They are not convinced the Exxon board vote reflects dissatisfaction with the company’s environmental record so much as a reaction to a poorly managed business losing money. 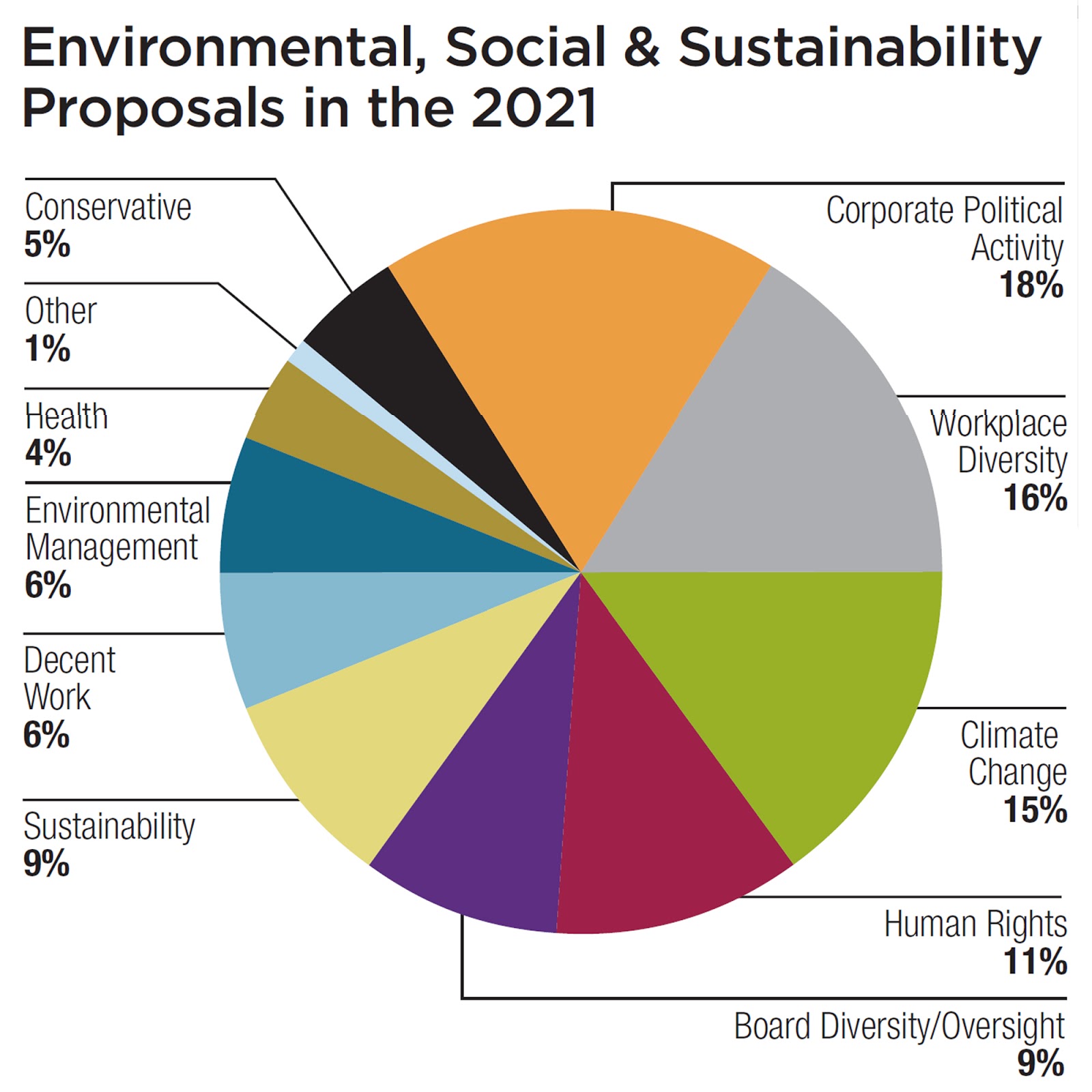 Or Wait and See?

“Was what happened [at Exxon] a victory for ESG or … a plain vanilla dispute about business model with a patina of ESG on top?” asked Kron.

He thinks it’s too early to tell. He said to expect pushback from entrenched business management. When that pushback comes, he said, and how large institutional investors like Black Rock, State Street, and Vanguard react to it, will reveal their motives.

“That will tell you what companies this [activist strategy] is replicable at,” said Kron.

But the fate of some of the socially-oriented shareholder resolutions this year points to a difficult road ahead. At the 2021 Amazon Annual Meeting, shareholders voted down resolutions that would have put an hourly worker on the board of directors, called for more transparency of the company’s practices when hiring executives who are women and people of color, and requested additional reporting on gender/racial pay disparities. All resolutions were vigorously opposed by management.

The next few proxy seasons may well determine if those other stakeholders will get the same consideration that management currently gives to its shareholders’ returns.

But others see the writing as already on the wall.