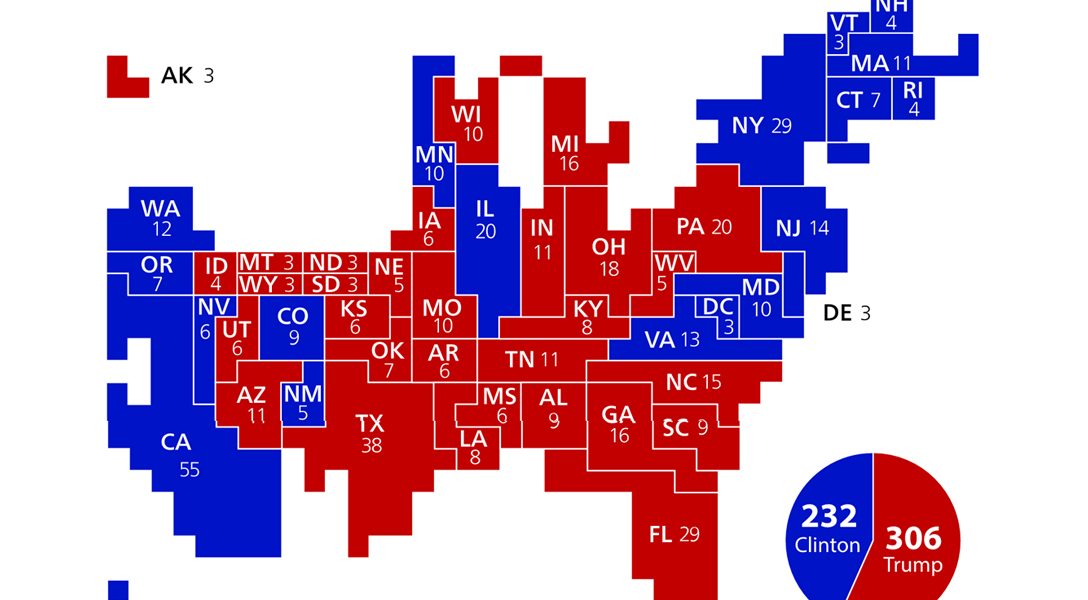 Yesterday, the 538 members of the electoral college met in state capitals across the nation to formally choose Donald Trump to be the 45th president of the United States. Even in the US, the event did not merit major news coverage on a day when the Russian ambassador to Turkey was assassinated and a truck barreled into a Christmas market in Berlin, killing 12.

Still, the world’s press paid some attention to the formal process. For example, The Guardian interviewed all six of the “faithless electors”, who had come forward to declare they would not vote for Trump. The Guardian also ran a separate story citing the Trump protests in Harrisburg, Pennsylvania, where 200 demonstrators chanted “No Trump, No KKK, No Fascist USA!” and the efforts of a few dozen activists in Columbia, South Carolina.

The paper went on to debunk the president-elect’s claim of a landslide victory. “Mr Trump falsely touted the elector win as a ‘historic electoral landslide’ in his statement on Monday….Mr. Trump’s electoral college win is ranked 46th of the 58 elections in American history,” the editors sniffed.

Although the presidential campaign in the US and Trump’s victory had been a major subject in Germany’s media, the Electoral College decision was relegated to the back pages as the country’s media focused on the apparent terror attack in Berlin.

The daily Die Welt also noted that Trump’s boisterous claim of a landslide victory was not supported by the facts. The paper pointed out that the president-elect’s views on the Electoral College had flip-flopped.

Citing an NBC poll, the Austrian paper Der Standard noted that Americans are much more concerned about a Trump presidency than they had been when Barack Obama and George W. Bush first took office.

Not surprisingly, RT, the Russian news outlet, focused on the electors who refused to vote for Clinton. RT pointed out that Clinton’s “faithless electors” wanted to make a statement of support for her opponent in the Democratic primary, Senator Bernie Sanders (I-VT).

In Australia, columnist Joel Meares predicted that a Trump-Putin “bromance” could only mean bad news for the LGBTQ community. “Under the Obama administration, the US has been a moral leader on LGBTQ rights,” Meares wrote. Noting that Secretary of State nominee Rex Tillerson’s company, ExxonMobil, had only recently adopted a nondiscrimination policy that included gay workers, Meares asked, “Will such a role continue to exist in a Rex Tillerson State Department? Maybe. Will it carry the same moral authority under a Trump House — with Putin on speed-dial and Bannon down the hall?”

Amid all the serious news, there was some lighter news commentary.

One Swedish daily paid a lot of attention not to the vote itself, but to a website developed by two advertising designers in Stockholm, who created www.trumpdonald.org.  Click, move your cursor around, and you can make his eyes roll insanely and his hair fly in any direction. It’s gone viral.

While this Kenyan news story ran close to the November 9 election as a humor piece, it is worth reading, if only for the writer’s heroic attempt to explain the electoral college to his readers.

Not so funny was an editorial from the Israeli paper, Haaretz. The headline read, “What if a Trump Presidency Is an Extinction-level Event?” And in the story the author writes,

“So the question that 538 Electoral College delegates have to ask themselves as they gather on Monday to cast their votes for president is: Can Donald Trump control America’s 1,930 deployed nuclear bombs and the additional 4,500 that are in stockpile? Do you trust him to prevent a nuclear war with China? Does Trump have the temperament and the wherewithal to defuse any potential nuclear confrontation, anywhere on earth?”