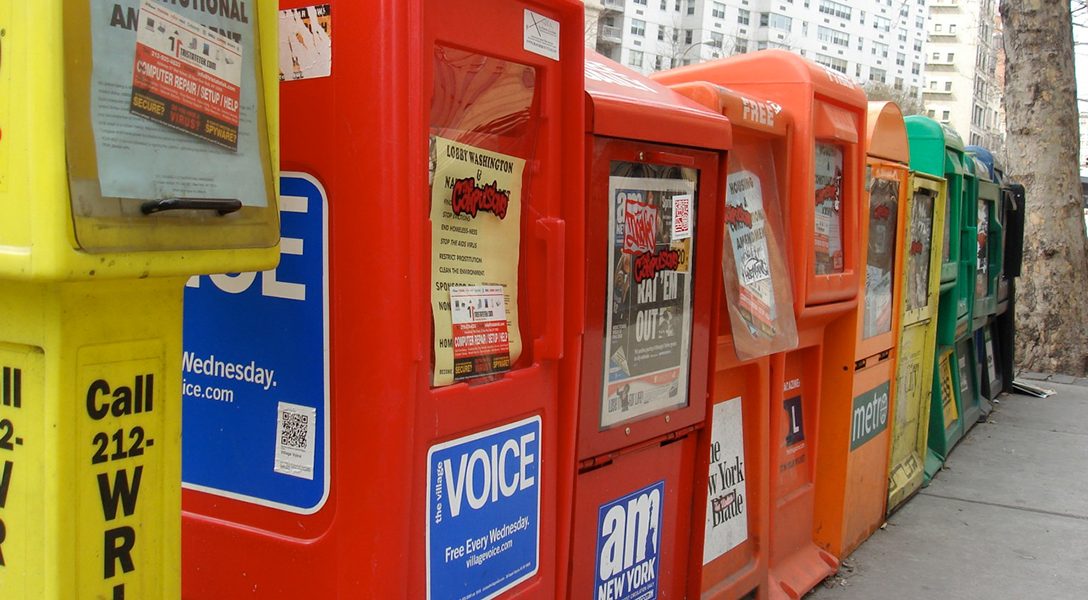 The Village Voice’s Death by a Thousand Cuts

When word broke late Tuesday that the Village Voice would end its six-decade print run, it provoked dutiful hand-wringing on social media by fans of the counterculture icon. At the same time, the emotional power of the elegies was strained by a recognition that sadness at the paper’s end was motivated not by excitement over the current product, but nostalgia for an earlier incarnation.

Indeed, tweets theorizing about how and when the paper really died proliferated. Opinions included: when it became a freebie; when it was bought by Arizona-based corporate raiders under the corporate rubric, New Times Media; when its executives started axing longtime columnists like Robert Christgau, Nat Hentoff and Wayne Barrett; or more recently, when, under its current owner, Peter Barbey, it vacated its own Cooper Square building. Perhaps the most surprising judgment came from Counterpunch editor-in-chief Jeffrey St. Clair, who claimed po-faced that the Voice “really died” when his late writing partner Alexander Cockburn was fired — an event, however unfair, that took place way back in 1982.

Such tweets reflect a long standing parlor game among ex-Voice hands and its observers on just when the paper ceased to exist as a vibrant cultural force. Russ Smith, editor of the New York Press, established in 1988 as a more scabrous (and politically conservative) alternative to the Voice, liked to opine that the paper became moribund through its devotion to lefty political correctness. In an April 2001 issue of the Press, Smith complained typically, “you’ve gotta take the equivalent of a urine test because of the politics.”

When asked his thoughts on his old foil on Tuesday, however, he seemed more circumspect, tweeting, “In 2017? No thoughts. Inevitable.”

There is certainly some truth to Smith’s theory that the Voice’s demise was determined by economic forces. Whatever its editorial policies, location, cover price, or lack thereof, the Voice’s main revenue stream came from its wildly diverse — and plain wild — classifieds.

Those who remember pre-internet downtown Manhattan can recall Astor Place on Tuesday nights, with hundreds of bodies snaking out from the newsstand on Lafayette and Astor Place. They were waiting for the Voice’s first run — filled with new apartment listings — to be trucked in from the presses. So when the Craigslist juggernaut became the go-to for kinky personals and inexpensive apartment listings, the Voice’s business model suffered a serious setback.

Even so, a purely economic argument can’t be the full story, because smaller cities have retained their alt-weeklies. The still thoughtful Chicago Reader and San Francisco Weekly retain print editions. Even Voice Media (formerly New Times) still manages to produce LA Weekly and Miami New Times, among other lesser titles.

New Times purchased the Voice in 2005, a time when the Phoenix-based company was undergoing rapid expansion. Anger at President George W. Bush over the handling of the Iraq war was at its apex, especially in left-leaning enclaves like Manhattan. But CEO Michael Lacey, while promising to reinvigorate the flagging title, claimed that as a local paper the Voice’s mandate did not include covering the disastrous presidency and the Iraq war.

It was a stunning repudiation of the Voice’s core liberal readership and reputation. A paper whose brief had always included being part of the national conversation was suddenly signalling a desire to run full-throttle in the other direction.

Meanwhile, Lacey’s promise of stiffened local coverage never really materialized. The hyper-gentrifying policies of Bloomberg went unchallenged, and the paper’s shrinking space was devoted increasingly to celebrating hipster excess, pop-music filler, and pieces cannibalized from the company’s other titles. By the time the editors made a concerted effort to publish more thoughtful features, it was too little too late.

In December 2009, I visited the Voice offices for a story I filed for the Awl about long-time gossip columnist Michael Musto, one of few remaining old hands then still there.

The Village Voice’s newsroom, which has gradually been consolidated onto one floor, was eerily quiet[.] Cubicles had been folded down and stacked near the windows, leaving empty space. A trio of people in suits — speaking to each other in hushed tones — patrolled the maze. Blown-up Voice front pages marked another era.

Reading my description eight years later, it seems I had decided the paper was, if not dead, at least on last-gasp life support.