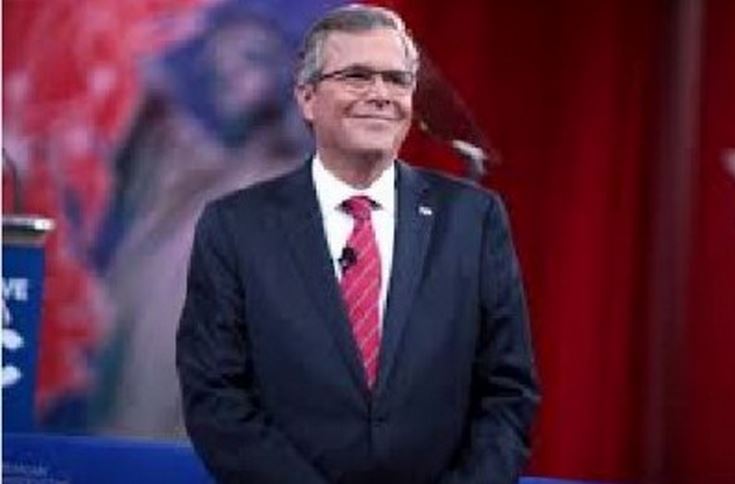 Jeb Bush isn’t technically a candidate yet, but he’s raised more money than some of his Republican counterparts who have declared their intention to run. Photo credit: Wikimedia Foundation
Deep State Journalism & Media

Leave it to the GOP to amass a field of White House hopefuls that is unprecedented in size, quality and diversity—and then let the process be rigged so that no one without a billionaire backer or previous name recognition has a shot at winning the nomination.

While not everybody may pay attention to the Republican primary, especially this early, all Americans should care about the highly undemocratic way in which it is being conducted.

Thanks to party-approved, made-for-TV debate rules and easily-sidestepped campaign finance laws, a handful of oligarchs essentially get to decide who runs for the nomination and who does not. As a result, a number of candidates could see themselves out of the race long before the first votes are cast.

With no incumbent president to contend with, it is very possible that somewhere between 15–20 serious (and not so serious—hello, Donald Trump) candidates will throw their hats into the virtual ring.

These include five current or former senators, eight current or former governors, the former CEO of a major corporation, a former IRS commissioner and a famous neurosurgeon. The group is also arguably the most demographically diverse that either party has ever fielded. While dominated by white men, as all primaries traditionally have been, there is one (highly accomplished) woman running, at least two Hispanics, an African-American and an Indian-American.

But voters will not likely get to hear from many of them, because that degree of openness isn’t in the interest of cable TV networks, the billionaires who are funding this year’s top candidates, or the Republican Party itself. Party leaders are rooting for a quick primary process so that its top candidates will not wear themselves out, both physically and financially, before the GOP champion has to go up against the Democratic nominee—who at this point looks to be a certain former first lady with well more than $1 billion at her disposal.

“It is becoming clear that the GOP leadership is looking for ways to prune this large field even before Iowa and New Hampshire perform their usual winnowing function,” Prof. Larry Sabato, director of the Center for Politics at the University of Virginia, told WhoWhatWhy. “They are facing a very likely nominee in Hillary Clinton who will barely be taxed on her way to a coronation (or so it seems early on).”

The first way in which the field is going to get cut will come at the hands of Republican billionaires who are in the process of picking their favorites. Thanks to non-existent spending limits, having just one oligarch on your side will make the difference between buying the kind of name recognition that it takes to appear on the debate stage, and becoming a less-than-historical footnote.

The second way candidates get culled these days is by exclusion from the debates themselves. Fox News, which is hosting the first debate, has set ground rules limiting the number of candidates on the debate stage to 10. Specifically, only those Republicans will get a spot who “place in the top 10 of an average of the five most recent national polls, as recognized by Fox News leading up to August 4th at 5 PM/ET.” CNN, which is hosting the second debate later in August, has a rule that is similar although a bit more convoluted.

The Republican National Committee is on board with the restrictions. “We support and respect the decision Fox has made which will match the greatest number of candidates we have ever had on a debate stage,” GOP Chairman Reince Priebus stated when the rules were announced.

But not all big-wig Republicans are happy with this arbitrary cut-off between the haves and have-nots in polling numbers. One aggrieved conservative is Bill Kristol, editor of The Weekly Standard. “I’m very annoyed at the RNC and Reince Priebus and now I think Fox is kind of colluding with them for that first debate in August at limiting the field,” Kristol said last week on MSNBC.

While both networks have promised to give the other candidates some airtime as well, that consolation prize will hardly provide the exposure needed to catch the voting public’s attention.

“If a candidate is deprived of the prestige of the debate stage, he or she will be relegated to the also-rans,” Sabato said. “How can a contender keep volunteers and donors motivated under these circumstances? Possible but difficult. This will be doubly devastating if a candidate fails to make the grade for both the Fox and CNN debates.”

As of right now, Ohio Gov. John Kasich, one of the few moderates in the field, would not get to debate based on the RealClearPolitics average of polls. Keeping him off the stage would be particularly odd since the debate will be held in the state he governs, and because the GOP must win Ohio in 2016 in order to recapture the White House. Republicans run the risk of alienating Kasich’s Ohio supporters if a rich goof who has a reality TV show appears on stage instead of their governor.

Carly Fiorina, the former Hewlett Packard CEO and the only woman in the field, would also not be allowed to participate. Nor would Bobby Jindal, governor of Louisiana and the first Indian-American to run for president. So much for diversity.

Former Pennsylvania Senator Rick Santorum, who was the runner-up in the 2012 GOP primary, right now also doesn’t make the cut. Santorum told the National Journal that his 2012 experience showed how unfair the current process was: ”In January of 2012 I was at 4 percent in the national polls, and I won the Iowa caucuses. I don’t know if I was last in the polls, but I was pretty close to last.”

His comments illustrate the problem of the “lesser” candidates. At this stage of the race, when not many people are paying attention, it’s all about name recognition, both earned and bought. So things are good if your name is Bush, Paul, Christie or even Trump, but not if it’s Kasich, Jindal or Fiorina, especially if you have no oligarch sugar daddy who can pay for a national campaign to boost name recognition.

The current rules will force a change in strategy for the non-front-runners. Instead of concentrating on the kind of retail campaigning needed to do well in Iowa and New Hampshire, a good dozen of the candidates will have to focus on somehow climbing a couple of points in the national polls in order to secure a spot on the debate stage. Such an effort takes precious time and money, which the oligarch-backed frontrunners do not have to expend. It’s just one more advantage for the well-heeled haves.

With the stakes so high, the candidates on the margins will feel compelled—out of desperation—to do whatever it takes to  get on that stage. And when that happens, the GOP, the cable news networks, and the public can expect to witness a very ugly race—to the bottom.