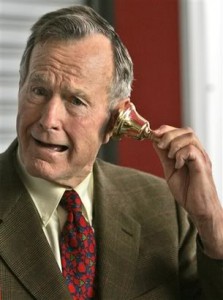 Times/HBO: a Flower for “Poppy” Bush Did you know it’s Celebrate Poppy month? A couple of weeks ago was the 88th birthday of former president George H.W. “Poppy” Bush (the “good” George Bush—sorta kinda.) And the media has been partying with a host of distinctly non-journalistic tributes.

HBO ran what Salon described as a “flattering documentary”—which, since documentaries are supposed to be about the truth, meant no documentary at all.

“41,” a new documentary about George H.W. Bush…is a political film that isn’t very political. It’s the story of the former president’s life, told only in his words, without much context and with no critical commentary.

Whoo-hoo! Good for HBO, continuing to push the bounds of the possible. Besides the cable giant, the New York Times’ Maureen Dowd, weighed in with more cotton candy.

I FLEW down to Houston last year to have lunch with George Herbert Walker Bush.

“Did you come because you think I’m going to die?” he asked me with a wry smile.

Not at all, I replied, adding that I wanted to join him on his planned sky-diving excursion when he turned 90. (It sends the world a message, as he puts it, that “old guys can still do exciting things.”)

It made me sad to see him in a wheelchair, his lower legs weakened by Parkinsonitis. He had once been so kinetic that the Chinese press described him as “ants on a hot pan,” and his golf game was so manic that W. dubbed it “golf-polo.”

But 41 can still drive his cherished cigarette boat, Fidelity IV, in Kennebunkport, and he was very much himself over pizza at his favorite Houston dive: racy jokes, no airs, ever gracious.

He spoke fondly of his new pal, Bill Clinton, and highly of President Obama.

That’s why we love the New York Times. It can find something cheery in the ways in which powerful men catering to rich people can get along irrespective of nominal party differences.

The problem, which neither HBO nor The Times will mention, is that Poppy Bush is only a “gracious” man in his public manners, not in his (largely deniable) actions—the most odious of which have never been reported to the American people by either the establishment media or the so-called “alternative” (liberal) media.

I spent years researching the elder Bush for my book, Family of Secrets.  What I learned fascinated and astounded me. It began to explain my gnawing sense that presidential elections generally have almost nothing to do with the rest of us.

The story of a handful of wealthy people perpetuating their own advantages through a broad range of legal, illegal, and even deadly acts—that’s the real story of George HW Bush, of his sons, his father, and the small army of lawyers, consultants, and soldiers who help them brutally game the system.

First, though, a bit more of the Times’s peculiar rendition of journalism, courtesy of Dowd, who usually writes with jocularity and irony but here plays her role nauseatingly straight:

[A]s he turns 88 this week with a birthday clambake in Kennebunkport and a screening of an admiring HBO documentary, “41,” we are in the midst of what his biographer [former Newsweek editor] Jon Meacham, calls “Poppy chic.”

A new CNN/ORC International poll found that Bush the senior is far more respected than Bush the junior, who is the least popular among the living ex-presidents.

Because you can read them for yourself (with footnotes galore), I won’t bother you here with the mind-boggling particulars that you won’t get from the vaunted fearless media, such as the back story that explains why Poppy can’t remember where he was when he heard that JFK had been shot (hint: 1976 was not the first time he was in the CIA). Or the nature of the elder Bush’s activities at the time Richard Nixon, a one-time Bush family retainer who as President struck an independent path, was taken down in the Watergate scandal. Or the three different stories Poppy told about how his fellow crew members perished while he survived after bailing out of the World War II plane he was piloting. Then there’s the nice little situation Poppy and his Texas friends struck up decades ago with the Saudi royal family that benefited both circles and explains American policy in the region ever since.

You’d think this would make damned good storytelling for an outfit like The Times or HBO. But you’d be wrong. Because the establishment in this country only tells one type of story: fairy tales.