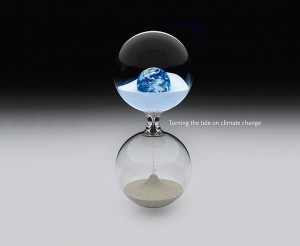 The other day, USA Today ran an article reporting that 2010 had tied 2005 as the warmest year  since record-keeping began in 1880. That’s disturbing data, or course. But what really caught my eye was who they chose to question the significance of the news: a climatologist with….the Cato Institute. That’s a policy outfit heavily funded by the very companies whose emissions heat up the earth’s atmosphere. Consider how he was presented:

…It was the 34th consecutive year that the global temperature was above average, according to the data center. The last below-average year was 1976.

Not so fast, says Pat Michaels, a climatologist with the Cato Institute in Washington. “If you draw a trend line from the data, it’s pretty flat from the 1990s. We don’t see much of a warming trend over the past 12 years.”

He says the gloom-and-doom projections on global warming are likely to be too hot. “The projections will have to come down,” Michaels says.

There are plenty of “serious science” organizations out there, so the significance of USA Today’s choice is worth pondering.

What I wanted to know was—were readers supposed to take that person’s views as serious science, or to stop and question his credibility? Was it perhaps intended as an unstated comment on how difficult it is to find a credentialed scientist who still insists that man-made warming should be dismissed as a problem?

At the Cato Institute’s website, one finds titles of such books, papers and studies as Meltdown: The Predictable Distortion of Global Warming by Scientists, Politicians, and the Media, and “A Harsh Climate for Trade: How Climate Change Proposals Threaten Global Commerce. Cato was founded by the billionaire Koch brothers, whose Wichita-based Koch Industries is America’s largest privately held oil company. It’s funding sources are a who’s who of the fossil fuels industry.

Don’t you think a reader has a right to know that—and that precious few serious scientists would accept employment there as a “climatologist”? Any more than most doctors would want to be the “public health specialist” at a tobacco company.  Yet in this most recent article, USA Today only describes Michaels as “a climatologist with the Cato Institute,” without telling readers what Cato is.

It’s interesting to note the evolution of Michaels’ professional title within the pages of USA Today. Prior to appearing as a “climatologist” in this article, he last appeared in an article in July 2010, as “climate researcher Patrick Michaels of the Cato Institute, a libertarian think tank”—a less scientific title, clearly connected with an ideological think tank. (USA Today could have gone one step further and let readers know that Cato is, with very rare exception, opposed to government regulation, period.)

Back in December, 2009, Michaels was identified as “a climatologist,” with no affiliation at all! That, of course, gives readers nothing to go by at all:

…Skeptics of man-made global warming, such as climatologist Patrick Michaels, say the e-mails show that scientists conspired to hide evidence that contradicted their theories on global warming, and tried to prevent opposing views from being published in scientific journals.

One has to go back to November, 2009, to find a quote in USA Today where Michaels is identified so as to give readers a clear sense of the pressures attendant on this “climatologist”:

That’s a strikingly more complete identification. But USA Today had no choice in this one instance, because Michaels himself was directly involved in the East Anglia e-mails controversy, as revealed in the following paragraph:

Michaels, a skeptic of the worst implications of a warming climate, comes under criticism in the e-mails for a 2007 Journal of Geophysical Research paper he co-wrote. The paper said that industry and urban heat explain half of the temperature rise seen over land. “Attempts to influence editors not to publish papers you don’t like: That’s the real issue,” Michaels says.

And what was Michaels’ job title just five days earlier in another article in the very same paper?

…The publication of the e-mails bolsters global warming skeptics and could reduce the odds of the Senate passing a climate bill early next year, said Patrick Michaels, a senior fellow for environmental studies at the Cato Institute, a libertarian think tank.

In this formulation, not a “climatologist” at all—a serious sounding title which confers legitimacy and gravitas on his pronouncements—but a “senior fellow” at a “libertarian think tank.” (In fact, Michaels is a climatologist, with real establishment credentials, but the point here is about the sort of climatologist who would work for Cato—and who Cato would want to hire, and why the reader has a right to know what’s going on.)

Just a quibble? Hardly. These things make a real difference in shaping public perceptions. They thereby influence what we as a society decide to do, or not do. About an issue that could, if the vast majority of scientists are right, make all the difference in the world. Literally.