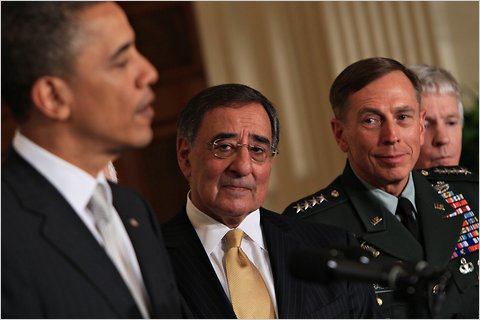 The CIA-Pentagon Shuffle: The Fake Story and The Real One Here comes more boilerplate reporting on Obama’s reshuffling of the National Security deck.  This New York Times reporter asserts with great certainty some conclusions that sound like they were hand-fed by the principals themselves.

There’s something else going on, but let’s first get the “authorized” version:

Leon E. Panetta is set to take over leadership of the Defense Department while the United States is fighting on three fronts, but he was selected for the job in no small part because his war at home will be with Congress over the Pentagon budget. And in that battle, defense budget analysts said Wednesday, he comes unusually well armed.

Mr. Panetta, 72, the C.I.A. director, previously served as director of the White House budget office and the House budget committee…Mr. Panetta has ties on both sides of Capitol Hill, where he served in Congress from California for eight terms, until he became President Bill Clinton’s first budget director in 1993.

His expertise will serve him well as he faces $400 billion in national security cuts ordered by President Obama through the 2023 fiscal year, a bracing new reality after a decade of ever bigger Pentagon budgets since the Sept. 11 attacks. Mr. Panetta’s personality — approachable and jocular — is also expected to help in negotiations with Congress.

OK, so, according to this version, the main thing the head of the Pentagon has to do is negotiate with Congress regarding those cuts. The reporter doesn’t say what exact role he will play, but presumably he has to convince military budget hawks that these cuts will not harm defense.

Well, Panetta may be “approachable and jocular” and a skilled negotiator, but it’s hard to imagine that those qualities will make such a big difference in persuading military budget fans to accept cuts. You’d think a general would be more persuasive, actually seem to know what he’s talking about when he says there is fat to trim—and far better political cover for members of Congress who have to explain lost jobs in their Red-state districts. “Leon Panetta made a good argument”? Don’t think so.

…Although Mr. Panetta is not a classic military strategist who can readily evaluate weapons systems and understand the inner workings of the Pentagon, he has a reputation as a solid manager who brought order to the chaotic Clinton White House.

This implies there is some kind of particular problem with chaos at the Pentagon. If so, it would be nice to know what that is.

The only thing that comes to mind in that regard is all those infernal leaks, via Petraeus, and McChrystal, to Bob Woodward, that forced Obama’s hand on Afghanistan and in some ways, Iraq. Obama had no choice on the troop increase because of these pressures. For more on this see our articles here and here and here.

Um…by jove, there it is! That’s the hidden story the New York Times can’t quite see or won’t, for some reason, share with us:

Obama considers the military a problem for him personally, especially with an election approaching, and he needs his guy in place to keep things under control over there. No more damaging leaks. And he can’t count on real military guys to testify before Congress with a straight face that, shucks, it’s fine to cut their allowance.

Back to the Times…

His C.I.A. job will also help him negotiate the military’s critical and frustrating relationship with Pakistan’s spy agency, the Directorate for Inter-Services Intelligence, which American officials say continues to play a double game and support both the United States and the Taliban in Afghanistan. As C.I.A. director, Mr. Panetta has met regularly with Lt. Gen. Ahmed Shuja Pasha, the head of the agency, a relationship he is certain to continue.

Ok, take note of that. Negotiate the US military’s relationship with Pakistan’s spies….

Meanwhile, over at the Washington Post, several solid reporters there (but, significantly not the Pentagon’s favorite “inside guy” Bob Woodward) are focusing on the CIA-Pentagon swap-eroo. Why General Petraeus as CIA director?

Gen. David H. Petraeus has served as commander in two wars launched by the United States after the Sept. 11, 2001, attacks. If confirmed as the next director of the Central Intelligence Agency, Petraeus would effectively take command of a third — in Pakistan.

Petraeus’s nomination comes at a time when the CIA functions, more than ever in its history, as an extension of the nation’s lethal military force.

So, if this is right, paradoxically, Panetta can’t stay at CIA because he’s too civilian for the “civilian” agency turned military proxy. And Petraeus isn’t politically reliable enough to be Defense Secretary, so why not a brilliant crossing of sides, putting him at head of a spy agency that doesn’t do all that much spying but is hugely involved in just about everything else?

Put him in charge of the war in Pakistan, not at the Pentagon, but at CIA. (By the way, the CIA was never supposed to be involved in any kind of covert activities, much less military operations, according to Harry Truman, who signed it into existence.)

CIA teams operate alongside U.S. special operations forces in conflict zones from Afghanistan to Yemen. The agency has also built up a substantial paramilitary capability of its own. But perhaps most significantly, the agency is in the midst of what amounts to a sustained bombing campaign over Pakistan using unmanned Predator and Reaper drones.

Why a CIA-run bombing campaign? Some of this has to do with undeclared war over Pakistan. Can’t have the US military in there, because, well, because the US military can’t be bombing people in that country. The CIA, well, who actually knows what the CIA is supposed to do, or what it actually does? Certainly not Congress, perpetually in the dark, its leaders constantly misled in supposedly hush-hush briefings.

Since Obama took office there have been at least 192 drone missile strikes, killing as many as 1,890 militants, suspected terrorists and civilians. Petraeus is seen as a staunch supporter of the drone campaign, even though it has so far failed to eliminate the al-Qaeda threat or turn the tide of the Afghan war.

But if Petraeus is ideally suited to lead an increasingly militarized CIA, it is less clear whether he will be equally adept at managing the political, analytical and even diplomatic dimensions of the job. His nomination coincides with new strains in the CIA’s relationship with its counterpart in Pakistan, and a chaotic reshuffling of the political landscape in the Middle East. If confirmed, he would be the CIA’s fourth director in seven years.

So, the Post is making approximately the opposite point the Times makes. Here, it’s a problem  that Petraeus will be bad at liaising with the Pakistanis. In the Times piece, it’s useful that Panetta will be good at that. Two sides of the eminently flippable military/CIA coin.

“I think in a lot of ways Gen. Petraeus is the right guy for the agency given the way in which the operational side of the house has really increased” since the Sept. 11 attacks, said Andrew Exum, a military expert at Center for a New American Security, who has also served as an adviser to Petraeus’s staff. “Having said that, I think where Gen. Petraeus will struggle will be looking at the broader global responsibilities of intelligence.”

Pay close attention.  “…right guy..for the operational side…struggle (with) broader global responsibilities…” There’s that unspoken Truman worry—there never was supposed to be any operational side.

For Petraeus, Pakistan is likely to be a particularly nettlesome trouble spot. A series of recent ruptures — including the arrest of a CIA contractor in Pakistan — have undermined cooperation against al-Qaeda and prompted threats by Pakistan to place new limits on drone strikes.

Petraeus has been a frequent visitor in Islamabad with key players, including Army Chief Ashfaq Kayani and intelligence director Ahmed Shuja Pasha. But he has engendered the resentment of Pakistani officials because of his demands that they do more against the Afghan Taliban. Many of them believe he is too transparently ambitious — a criticism that he has at times faced among his peers in the United States.

Absolutely. Should be mentioned for context in any article about the position-hopping. CIA is a kind of graveyard for a lot of careers, notable exception CIA director-turned-president George H.W. Bush and his CIA director-turned-Defense Secretary, Robert Gates.

Oh! Panetta’s path is a repeat of Gates’ path over the course of the two Bush presidencies. A loyalist moved from CIA to Pentagon, while expendable figures are put in charge at CIA.

….Petraeus seems unlikely to encounter significant opposition from Capitol Hill. Sen. Dianne Feinstein (D-Calif.), the chairwoman of the Senate Intelligence Committee, which will consider the nomination, signaled support for Petraeus but stopped short of a formal endorsement.

“He is clearly a very accomplished officer and familiar with the parts of the world where many of the threats to our security originate,” Feinstein said in a statement. But being a military commander “is a different role than leading the top civilian intelligence agency,” Feinstein said…

Maybe, maybe not, these days.

…Petraeus’s nomination triggered some grumbling among CIA veterans opposed to putting a career military officer in charge of an agency with a long tradition of civilian leadership.

Others voiced concern that Petraeus is too wedded to the wars in Afghanistan and Iraq — and the troop-heavy, counterinsurgency strategy he designed — to deliver impartial assessments of those wars as head of the CIA.

Indeed, over the past year the CIA has generally presented a more pessimistic view of the war in Afghanistan than Petraeus has while he has pushed for an extended troop buildup.

Obama administration officials said that Petraeus would retire from the military to take the CIA job. Even so, a U.S. official close to the general said he is likely to view running the agency largely through the prism of his experience as a wartime commander.

The official said Petraeus would likely make frequent visits to CIA stations around the world, and defer to the Director of National Intelligence on Washington-based issues such as budgets and big-ticket technology programs.

Petraeus has spent relatively little time in Washington over the past decade and doesn’t have as much experience with managing budgets or running Washington bureaucracies as CIA predecessors Leon E. Panetta and Michael V. Hayden. But Petraeus has quietly lobbied for the CIA post, drawn in part by the chance for a position that would keep him involved in the wars in Afghanistan, Pakistan, Iraq and Yemen.

As top commander in Iraq and Afghanistan, Petraeus has relied heavily on CIA and special operations forces to capture and kill mid-level and senior insurgent leaders….

And, finally, back to the Times for the really crucial last paragraph:

Mr. Panetta, the son of Italian immigrants who served as a first lieutenant in the Army in the 1960s, has a family walnut farm in Carmel Valley, Calif.

Aha! Walnut farm. Something in that, surely. Managing nuts? Tough nut to crack?

By the way, for more on power struggles between entrenched internal forces, and the president–any president (and certainly Obama)—see this piece of ours.