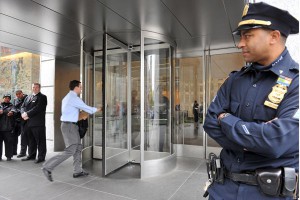 Subprime (Editorial) Real Estate: Why greed stories are for everyone For us, it’s a rollercoaster. For them, just a revolving door

Sometimes there are very, very good pieces in the New York Times. Usually, they don’t get nearly enough attention. One of the reasons is that the deliciousness of what is being reported is kept from the large audience who might act on the information because it has been packaged instead for the wrong crowd.

Writing about what’s wrong with Wall Street in an investor-oriented Times column called Dealbook is like writing about new developments in deadly weaponry for a publication aimed at maximum security prisoners: it just gives them new ideas.

Such it is with an article about subprime mortgages, bonds, and those who invest in them. The Times has a great little updater on this, about a character named Greg Lippmann who is straight out of Oliver Stone’s Wall Street.

Some Wall Street investors made money as the mortgage market boomed; others profited when it fell apart.

Having reaped big gains during both of those turns, Greg Lippmann, a former star trader at Deutsche Bank, is now catching the next upswing: buying the same securities built from mortgages that he bet against before the financial crisis erupted.

Mr. Lippmann is joined by other big-money investors — mutual funds like Fidelity as well as hedge funds — in riding a wave of interest in the same complex loan pools that nearly washed away the financial system….

Ahem! But instead of this being read by those independents trying to decide what they think of Occupy Wall Street, or by teetering homeowners who are thinking of voting for Mitt Romney because he promises lower prices at the tank, it will be read primarily by the same amoral miscreants gaming the system—like the guy in the article.

The underlying point of the piece is this: There’s no stopping these SOBs. They can ruin people’s lives, and ruin the country….and they just keep on merrily chugging.

As if to underline the point about the moral depravity and utter blindness to the misery caused by this kind of speculation, how does this man spend his free time? Not passing out blankets to the poor, presumably. No, passing judgment on which high-priced Manhattan sushi restaurants are up to his exacting standards. That about says it all:

Let ‘em eat sushi. But why let ‘em destroy our lives with impunity?